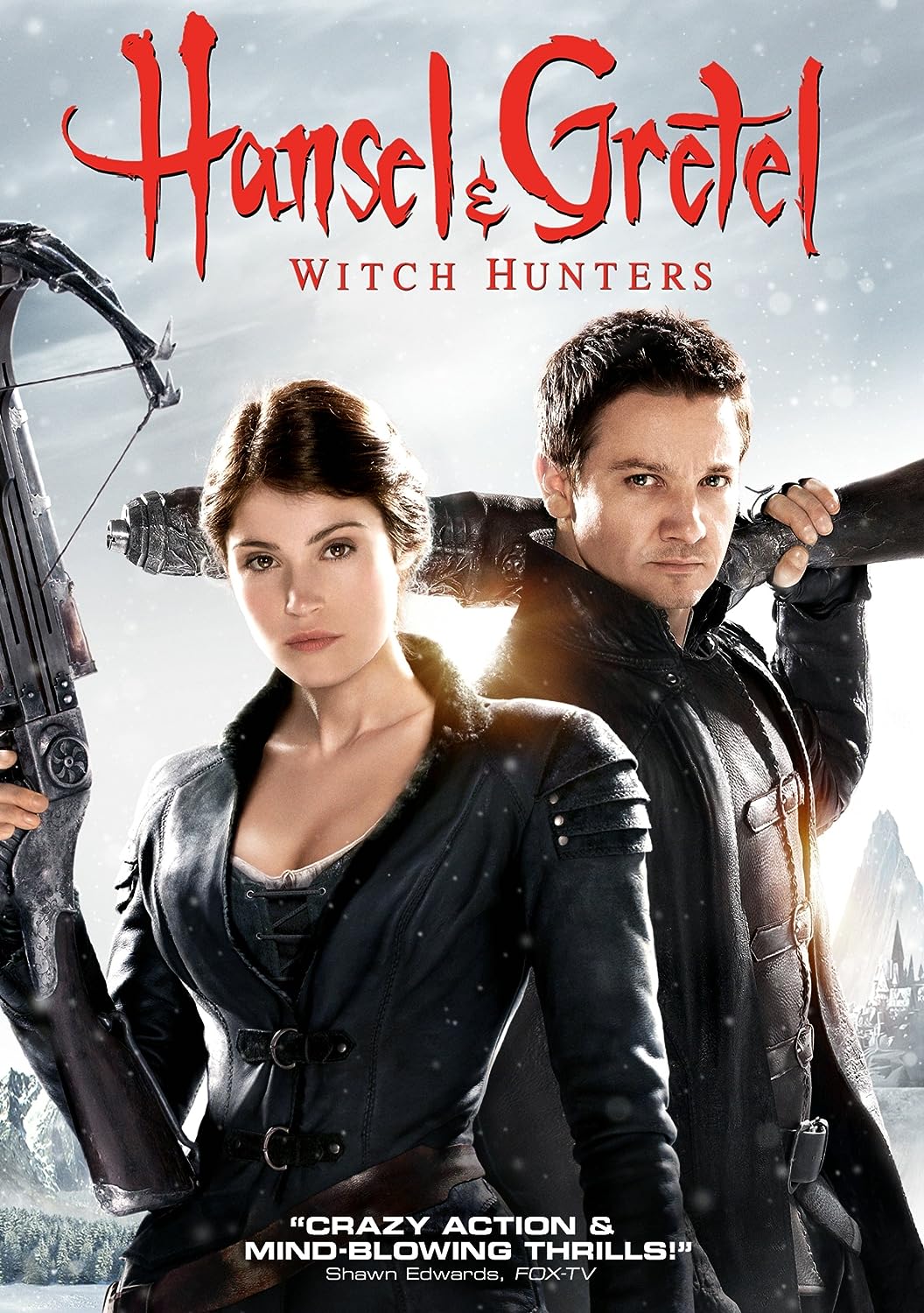 Having seen Hansel & Gretel: Witch Hunters, I have to ask why is there such hatred towards it?  Is Hansel & Gretel a great film?  NO!  Is it a horrible film?  NO!  While Hansel & Gretel is by no means intelligent or clever and has issues in regards to overall plot, it is a fast, fun, zippy little bit of fluff, not to be taken seriously.

We get the basics to the Grimm fairy tale most of us know: little Hansel and his sister Gretel are left in the forest by their father (Thomas Scharff).  While there, they encounter a house made out of candy, enticing our pair.  However, it's a nefarious trap, set up by a witch, one who forces Hansel to eat mountains of candy with the intent of cooking them.  However, Gretel frees herself then Hansel and together they throw the witch into the fire.  They have found their mission in life.

Jump to "Many Years Later" (and that IS how it appears on the screen).  The adult Hansel (Jeremy Renner) and Gretel (Gemma Arterton) have been summoned to a village because several children have been disappearing (we know this because their pictures are on milk bottles...seriously).  The local Sheriff (Peter Stormare) does not want these 'witch hunters' in his town, figuring he and his posse can do themselves.  However, their presence thrills Ben (Thomas Mann), their biggest super-fan.  He has been following their careers for years, keeping clippings of all their exploits.  Hansel isn't all that interested in Ben's fixations but Gretel is a little more gracious.

Soon, we find why the children are disappearing: there is to be a Blood Moon in three nights hence, and the children are needed in some sort of ceremony for a witches/bitches brew (or perhaps as snacks for the other witches to munch on).  This ceremony, which involves taking the heart of a White Witch (or a descendant) will make them immune from fire.  The head of the Witches, one Muriel (Famke Janssen), knows where she can get her hands on a certain heart, but more on that later.

Soon, after some hunting, the siblings are separated: Gretel inspires lustful thoughts to Ben, while Hansel inspires full-on frolicking with Mina (Pihla Vitala), a woman they'd saved earlier from burning.  We also learn that a troll named Edward (Derek Mears, voiced by Robin Adkins Downes) has been helping the witches, although he has a good heart (saving Gretel at one point).  Eventually, we discover there was a reason why Hansel and Gretel were left in the forest: far from being abandoned, they were being saved because their mother was a White Witch.  Their parents were killed by frightened villagers, and Muriel was too late to get at their mother's heart.

Not too late though, to get at the heiress.

Now Hansel, along with Ben and Mina (whom we discover is a Good Witch...begging the question if Glinda is her cousin because she tells us that basically only bad witches are ugly) must rescue Gretel and kill Muriel and her minions once and for all.

I just don't follow why so many of my brethren seem to detest Hansel & Gretel: Witch Hunters.  I judge a movie based on what it is trying to do.  Hansel & Gretel is just suppose to be a good time, something to while away a pretty fast 90-odd minutes without taxing one mentally.  In that regard, the film then must be considered a success.

This isn't to say I thought Hansel & Gretel is a great film or even an intelligent film.  Often I was forced to suppress the giggles at some of the performances, in particular from Janssen as this wicked witch who can change from ugly to...well, Famke Janssen.  Then again, here we are at the crux of Hansel & Gretel: exactly how much are we suppose to take any of this seriously?  I'd argue that we aren't suppose to take much of it seriously.

It isn't a spoof because there really is no winking at the audience where everyone knows this is all a joke.  Mann, Arterton, and in particular Renner (who often comes across as someone who can never take anything lightly) are playing the parts straight.  However, I'd say that the witches appear to be more the humorous group, not exactly playing it camp but also not appearing to be particularly straight.  In short, Hansel & Gretel is neither spoof nor downright action/horror film.

What is was in my view was a hybrid, one that accepted the oddball premise but didn't go too far in either ridiculing it or taking it all seriously.  I'd argue it leans more for the serious side, but it has enough action to not let it wallow in any grand tones.

However, this was an element that I found slightly disconcerting.  Writer/director Tommy Wirkola (co-written with D.W. Harper) were very indulgent in the gore and violence, which is far too bloody for my taste, and certainly not for children.  I was a little disturbed to see people (not witches, but people) being torn apart and in one point having their heads literally stomped on.  I would advise STRONGLY against taking children.  This is not a film for kids.  It is meant for teens and adults, so don't let the subject matter dull you into a sense that this is a family film.

In terms of performances the only one that stood out was Mann's eager fan Ben, who understood that he was playing the comic relief.  He was light and amusing.  Renner at times didn't appear to believe his own dialogue, but when we get the action scenes, his scowl works well.  Arterton is there, and while I wasn't impressed she didn't embarrass herself.

What I found to dislike (if anything) about Hansel & Gretel is that almost all of the action scenes were difficult to follow and the plot had one too many coincidences, such as the final confrontation between the siblings and Muriel taking place in the same candy-coated house of their youth.  Also, while it is good to note the danger of eating too much candy, I would imagine the diabetes Hansel acquired from his time with the witch did not spring from the overindulgence in what would have been a remarkably short time.

However, despite all these points, when I left Hansel & Gretel: Witch Hunters, I left with a smile on my face.  I enjoyed it (though not the hint of more films...never liked that in almost any film). It may have been dumb, it may have been goofy, and it may have been a weak film.  However, I can't say that I didn't enjoy my time with it.  Mindless entertainment that didn't aim for more than to give me a few laughs, some oddball action and a fast story (so fast I didn't think much on or of it)?   Can't complain.