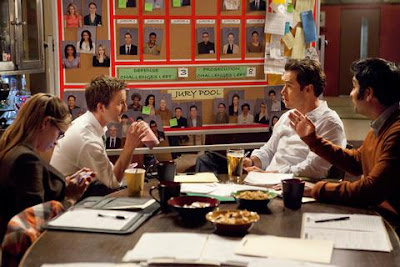 To Tell The Truth, It Disappoints...

It is shocking that Franklin & Bash co-creators Kevin Falls and Bill Chais could write a script that had me hating our fun-loving duo within seconds of it starting, but that they did with Voir Dire, an episode that sapped almost all my love for this series.  When once Jared Franklin (Breckin Meyer) and Peter Bash (Mark-Paul Gosselaar) were non-conformists sticking up for the little guy against the stuffy suits (personified by Reed Diamond's Damien Karp), now they just come off as egotistical and uninterested in behaving like functioning adults.  Voir Dire should be the breaking point between having our heroes living like Eternal Fratboys and having them maintain their sense of whimsy while slowly taking on actual responsibilities.

We begin with Jared and Peter back at the diner.  They are having breakfast, but there is tension.  The partner's meeting (daily I think it was) started at 9:30, and it's already 9:45.  Peter wants to get to the office, but Jared is too involved with his breakfast to care.  As a result of their absence, they by default are handed a case involving someone who knows the mechanic of Stanton Infeld (Malcolm McDowell).  This would be Sal Gotelli (Gino Anthony Pesi), a chop-shop guy accused of assaulting three other goons.  Our gumba is a total idiot: at one point, an Iron Chef-type show puzzles him: a program that is both a cooking a show AND a competition being beyond his comprehension.

Now, Sal did actually beat the goons down, but it was first self-defense, then he reveals it was over protecting a girl, Annabelle (Colleen Foy), who Sal says was threatened by them and whom he has a crush on.  Sadly, Annabelle has no idea who Sal is.  She recognizes him but they've never shared anything other than the purchases he's made.

Our muscle-moron appears to do everything to sabotage his own case: he goes to Annabelle which makes her leave, fearing her life's in danger, and continuously keeping bits of information from Franklin and Bash.

Fortunately for them, the majority of Voir Dire involves not the trial but the jury selection.  Our duo, in typical Franklin and Bash style, don't take the advise on jury selection from Infeld, Hanna (Garcelle Beauvais), or Karp.  Not even the summer intern shadowing them, Bonnie Appel (Danielle Panabaker) appears to dissuade them to stop offering challenges to nearly everyone to pick the jury they want for a self-defense case.  The fact that the prosecution hasn't offered any challenges themselves worrisome, especially after they have nearly depleted their own.  Of course, it's because the prosecution KNOWS it will not be a self-defense case due to Sal's own very-large stupidity.

With only two challenges left, it's up to Franklin and Bash to basically play the prosecution and jurors for fools to get the jury that will ensure their victory.  If it is due to tricking both groups, then be it.  If it means using Kiki Parker (Sandra Purpuro), the garage's secretary to whom Sal had been given the items he's bought from Annabelle and whom he hooked up with to show that Sal was motivated by unrequited love, then be it.

Voir Dire ends with opening statements where the prosecution will actually use the 'love' motive, which is exactly what Jared and Peter wanted all the time, thus suggesting that they will win this case.

It's hard to care for two individuals who are basically irresponsible, immature, somewhat sexist, and even up a point stupid, but Voir Dire not only wants us to expects us to cheer them on.  I had an immediate problem when we first see how easily Franklin and Bash, in particular Jared Franklin, blow off a partner's meeting.  Chais and Falls have a great set-up to what could be an evolving storyline between them: how Peter wants to grow up and become an adult while his bromate (brother/roommate) Jared simply won't grow up (and that is not a Breckin Meyer short joke).  It's obvious Peter is irritated, even angry, at being made to either run late or even miss a partner's meeting while Jared flat-out doesn't care.  Whatever is holding our bromates might be slowly coming apart: the pull of responsibilities versus the hope to extend their adolescence, but Voir Dire doesn't have the courage to explore this or let our characters grow.

Instead, pretty soon this thread is discarded for more 'hijinks'.

What is extremely irritating about the opening scene is that even in the Franklin & Bash world, two potential partners missing a partner's meeting merely because would not endear them to the partners who are not as implacably opposed to them like Hanna and Karp.  In fact, it might even given Hanna and Karp leverage to show Jared and Peter are simply not ready to take on the added responsibilities of representing Infeld and Daniels.  It just is wrong, and irrational, to have our two heroes not evolve or at least question whether they should continue to live up to Pitbull's mantra: Don't Stop the Party.  It would be nice to see Franklin and Bash keep a balance between being the fun-loving, anti-establishment fellows we met in Season One while slowly adapting to the responsibilities Season Two presents them.  Rather than that, our characters appear to be regressing, becoming MORE stupid as time goes by.

We've had examples of this already, but how bright can our lawyers be when they think referring to themselves in the third person means that each word in "Franklin And Bash" makes three?

There is something irritating, even aggravating, about two men in their thirties (or at least one) who feel free to miss meetings because they want to.  It's one thing to go against the rules, but another to think that ALL rules don't apply to them.  There's an arrogance to that which make what was once fun now be dismissive.

However, let's move on to the rest of the episode.  We see that they are clearly not taking the jury selection process seriously, showing a cavalier attitude in how they get the jurors.  Their idea of what constitutes a good juror reaches a nadir when Pindar (Kumail Nanjiani) puts a section on their board for JILFs (Jurors I'd Like to Foolaroundwith).  I noticed at the end there was a MAN'S picture in that section.  I figure it is an inside joke among the Franklin & Bash crew, but it was a sign of my boredom with Voir Dire that my eyes started wandering to the board.

Of course, it does make one wonder WHO put that picture up?  It couldn't be the investigator Carmen (Dana Davis) who objected to it in the first place.  It's not Peter, whose run through two women this season.  It's highly unlike Bonnie the Shadow did it, which leaves us two suspects: Pindar, who created the JILF Board, or Jared, who seems unnaturally attached to Peter.

The dumb Italian mug and the sleazy Italian Jersey Shore-type broad were stereotypes, as were some of the jurors (the pretty Southern belle, the tough gun owner).  While Pesi didn't stretch as an actor with the dim-witted Sal (so dim-witted he, to quote Jamie Lee Curtis in A Fish Called Wanda, "to call (Sal) stupid would be an insult to stupid people", he did what was asked of him: be a stereotype.

There is one bright spot in Voir Dire: Panabaker's Bonnie.  We get that she and Jared have similar backgrounds: scions of attorneys fearful they won't measure up to their father's reputations.  Not only was Panabaker the best performance all around but I hope that her character will reappear, even give Jared the romantic partner he so needs given that this season Meyer is the only one not paired off with someone at least once.

It is curious that at the end of Voir Dire, we're suppose to figure Franklin and Bash would win.  It's a curious thing that this case they 'won' not by cleverness but by manipulation.  It almost makes Jared Franklin and Peter Bash rather grotesque, not heroic, because we didn't see their victory by their minds.  Instead, by deceiving others they got their way.

Wrapping up just how shocking Voir Dire is we have John Landis directing.  How could something so bad come from someone so good?

Voir Dire is something that almost angered me: how these two goofballs who don't take anything seriously get their way despite being irresponsible in their duties to the point of arrogance.  There's something now seedy and unpleasant about Franklin and Bash if this is how they continue, but I hope this was just a one-off misfire.  Otherwise, I will swear Franklin & Bash off.

Next Story: Summer Girls
Posted by Rick at 6:58 AM