Adding the 'Romance' In Bromance...

It's a depressing sign of just how bad Franklin & Bash has gotten that the two leads coming up with the legal strategy of declaring their former boss a sex addict to restore his law license is the most sane and rational thing they've done.  Despite my growing love for baseball, Kershaw v. Lincecum as a title went over my head.  Making matters even worse, despite their featured role the baseball rivalry between the Giants and the Dodgers plays no role in Kershaw vs. Lincecum.

In fact, not much plays a role in this Franklin & Bash episode, apart from showing both their general incompetence and at last fulfilling my long-held idea that Breckin Meyer's Jared Franklin is a homosexual in denial, both about his sexual orientation and his love for his partner/best friend, Peter Bash (Mark-Paul Gosselaar).

As befits the fact that business at Infeld Daniels Franklin & Bash, LLC. is drying up, we only one case for the boys to be involved with.  A divorce case comes their way, in the form of Chelsea Beckman (Kate Beahan), who wants a divorce from her husband.  They take the case, which especially pleases Peter Bash (Mark-Paul Gosselaar), who is thoroughly smitten with Chelsea.  Only one problem: unbeknown to the boys, Chelsea happens to be the wife of Dr. Beckman (Willie Garson), the plastic surgeon who is subletting their office space.

Do I hear 'conflict of interest'?

Now the boys have a dilemma: they could work with their client and take Dr. Beckman to the cleaners, or they could please the only major source of income and not take the case, or at least make things hard for Chelsea.  This situation isn't helped by eager-beaver attorney Anita Haskins (Toni Trucks), who is desperate to win her case and start going to court as lead counsel.  She pushes ahead, despite Franklin & Bash's delicate balancing act between serving their client and serving their patron.

As if that weren't all bad enough, the building owner Nate (Ken Weiler) now has the temerity to ask for the two month's back rent Franklin and Bash haven't been able to come up with.  They ask for a longer grace period, but he won't go for it...unless they can get the Infeld Daniels season tickets to the Dodgers game which the firm has behind home plate.  Jared immediately promises that, even though he and Peter both know they had to sell those tickets to keep afloat.  And who do you think now has those tickets? 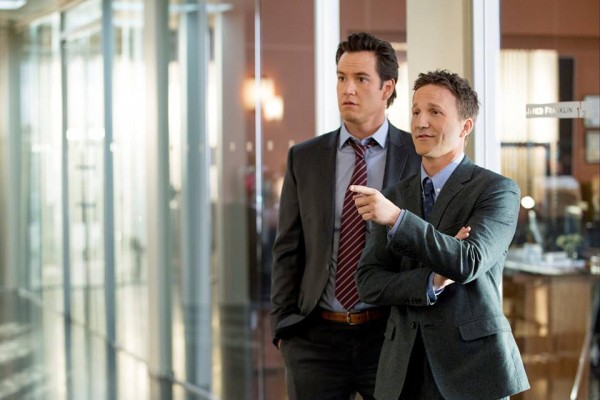 That's right: Franklin and Bash's favorite nemesis, Damien Karp (Reed Diamond).  He of course won't give them the tickets...unless they can score a table at an exclusive restaurant by the end of the week.  Jared, once again, immediately says done and done.  Only one problem (seriously, have Franklin & Bash producer/creators Kevin Falls and Bill Chais simply run out of ideas?): there's a six-month waiting list to get in.  Peter knows this, Jared doesn't.

No problem: they will use their charms to convince the chef to let them squeeze in two more.  Here, the manageress, Jocelyn (Christine Donlon), after some beers and a little Truth or Dare, gets them to a Dare.  She tells Jared to kiss his partner.  Where, he asks.  On the mouth, she says.  Thus, after four years of subtle suggestions, "Elmo" Jared Franklin finally fulfills his unspoken desire to kiss his 'life partner', Peter Bash.

Whether this is all a rather sad and desperate ploy for ratings or an acknowledgment that at least on Jared's part, he may be a repressed bisexual or homosexual in denial I don't know.  In any case, this lip-lock is built up to a 'make-out' session by their erstwhile boss, Stanton Infeld (Malcolm McDowell), who is now crashing at the beach-house the boys are living in (even though, technically, the house is Infeld's and they have been living there basically rent-free).  Despite the lips a'flame, she still can't squeeze them in because of fire codes stating a certain number of people.

No problem: they know someone in the Fire Department who can help them lift that number.

Seriously, this is getting so out-of-hand, it's beyond sad.

Well, their fire captain has this speeding ticket...

Let's wrap all this up shall we.

Anita fixes the ticket (even though she had to show the Wildlife Court, which is trying the case because it was a state park where the speeding and rolling past stop signs took place, her old law firm's card to impress the court), which allows the fire captain to add the number of occupants (but whose inspection closes the restaurant due to asbestos).  The chef, Sebastian (Ricardo Mamood-Vega) is convinced to cook a special meal for two (that being Karp's clients) in exchange for staying a free weekend at the beach-house (Sebastian being passionate about surfing), which in turn frees up the Dodger tickets, which in turn allows them more time in their office.  As for the divorce case, it looks like the pre-nup is solid, but with a little trick they are able to show that Dr. Beckman cheated on his wife...with his wife.

Dr. Beckman had been giving Chelsea free plastic surgery, and to everyone's surprise he in a bizarre Frankenstein-like way had been subconsciously turning his wife into an old girlfriend.

Finally, Franklin and Bash convinced the law license board that Stanton Infeld was in the grips of his sexual addiction when he got screwed by Rachel King (and thus incapacitated in his thinking) by presenting a smorgasborg of witnesses detailing his wild sexcapades (including, curiously enough, at least one man he helped join the 'mile high club').  Dr. Beckman decides that, his marriage ended but realizing his errors, he will move to Paris, where he will dedicate himself to perfecting the perfect breast...and throw in a few cleft palate surgeries for the Smile Train on the weekends.

I don't know why Franklin & Bash has crashed so spectacularly.  In fairness, Kershaw v. Lincecum isn't as dreadful as The Curse of Hor-Aha, so at least it has improved.  However, that's like saying a patient has improved because he's gone from Ebola to syphilis.  Kershaw v. Lincecum really couldn't be worse than the disaster that was the Season Four premiere, but it isn't to say it's any better.  About the only real improvement was not having the flat-out creepy Danny Mundy in the episode (though I lay the blame more on the script than on Anthony Ordonez, who I think did the best he could with what he got).

That, however, doesn't excuse Trucks' rather peppy take on Anita (a poor substitute for either Carmen or Pindar).  Last week, she was passive-aggressive (emphasis on 'aggressive'), pushing the boys to get her to try cases and 'not be third chair'.  Guess what she was in the divorce case?

Kershaw v. Lincecum also has strange, even contradictory, plot points.  Unless Chelsea kept her maiden name did no one wonder why a "Mrs. Beckman" showed up in their law office?  Did it not strike Chelsea even the slightest bit odd that she would go to a law firm where her husband had his office?  The entire set-up to the divorce case is a bit muddled: either she got a sudden impulse to divorce Dr. Beckman and went straight from his office to Franklin & Bash's office or she had this thought out and decided the most rational course of action was to go where her husband was basically providing the funding for said law office.

Furthermore, it does seem strange that, despite their desperate financial straits, they would take a case that was so dangerously close to home.  Again, conflict of interest...

As all that wasn't bad enough (and it was pretty bad, if not sad), we get this cliché of 'one promise leads to another, with hilarity ensuing'.  Hilarity did not ensue.  Instead, all this quid pro quo business seemed to merely stretch out an episode that was so shockingly hollow.  It was almost like watching a scavenger hunt, and not an interesting one at that.

Finally, as for "The Kiss".  Again, I don't know if it was to give fans like me, who have long suspected Jared Franklin to be either bisexual or a homosexual in denial, a way to confirm the suspicions or a way to wink to those who think Jared and Peter's relationship is far more intense than viewers thought.  Still, the more things go on the more curious they get.  At one point Jared describes their kiss as 'hot', and I ask you, what straight man ever says that kissing another straight man was 'hot'?  Perhaps in gay porn movies, but apart from that it all seems so strange that these two are compelled by the silliest of reasons to share a brief moment of physical intimacy.  If they had been drunk, perhaps, and granted they were a little buzzed, but really?  Truth or Dare?

That, however, may not be as sad as seeing Malcolm McDowell's nude romp or Stanton Infeld's sex confessions.  It all smacks of either desperation or 'we just don't care anymore' on the part of the participants.  At a certain point in Kershaw v. Lincecum (when they are negotiating with Karp for the Dodgers tickets) I think I sensed that both Gosselaar and even Meyer (the more eager of the two in this sh*tpile) know all this is crap and played it as such.  It's as if everyone in front of and behind the camera has pretty much given up on making a good show and are just going through the motions, waiting for the ship to finally sink.

Really about the only good thing in Kershaw v. Lincecum was Diamond (who still has the smug, dismissive nature of Karp down pat, especially in his dismissiveness of how Anita could find himself with these to nitwits) and the Smile Train shout-out.

Somehow, even by the low standards of what is suppose to be a frothy show (though TNT for some odd reason declares Franklin & Bash a 'drama'), Kershaw v. Lincecum sucked.  It just sucked.  There's no way around it.

Then again, I get the sense that Jared Franklin would really love to suck...

Next Episode: Love is the Drug﻿
Posted by Rick at 6:39 AM