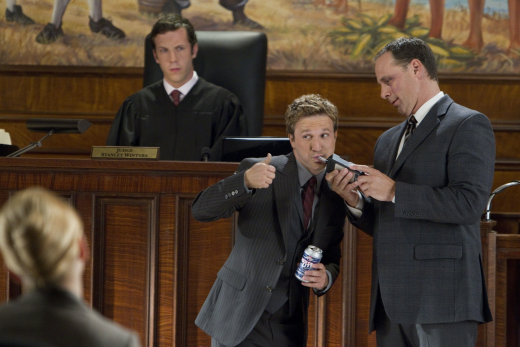 On Besties And Boozing...

I enjoyed Bro-Bono thanks to the human element within the story, though perhaps I am not as enchanted with it as I watched it the first time.  It is a good insight into primarily Jared Franklin (Breckin Meyer), whom we learn can harbor a grudge and first meets Ellen Swatello (Rhea Seehorn), who will come back to haunt him as his occasional lover with whom he can have 'hate-sex' with.

The fact that Swatello is remarkably bitter and mannish should not suggest that Jared Franklin is in any way sexually attracted to beings who have masculine elements.

We have the primary case, that of Rick Paxton (Harry Hamlin) and his soon-to-be-ex-wife Maya (Bre Blair, not to be confused with Brer Rabbit).  Paxton, a Richard Branson-type, has built a reputation as the ultimate ladies' man, so much so that in the prenuptial agreement there was an adultery clause, stating that a fortune would be forfeit if either had an affair.  As the investigation goes on, could they actually have been sharing the same mistress?  Allison Cruze (Andrea de Oliveria) denies sleeping with either of them.  However, thanks to Jared's instincts, not only does the truth come out, but a reconciliation occurs between Rick and Maya.

The other case involves Jared and Peter's old friend Danny Dubois (Michael Weaver), better known by his nickname of Double D.  Jared still resents Double D because back in high school, his Big Man on Campus (no, not a Breckin Meyer short joke), showered with Jared's girlfriend (begging the question, Jared Franklin had a girlfriend?!).  Double D has fallen on hard times, which as far as his frenemy is concerned, is schadenfreude.  Double D is now forced to sleep on his grandma's couch at her retirement home, making money doing odd jobs for the residents, including driving them around.  To Double D's surprise, he actually enjoys his work there, but he needs Franklin and Bash's help due to an assault charge where he's accused of taking a swipe at a cop.  The boys are able to successfully argue that in the confusion who know if it was intentional or self-defense, but now he gets a drunk driving charge thrown at him.  This will mean that if convicted, out goes his license...and his spending money.

Some of the residents, including Nanette (Jenny O'Hara), who goes beyond cougar to Pindar (Kumail Nanjiani) into straight-up saber-tooth tiger, try to help Double D, but little things like Nanette's former past as a hooker get in the way (devastating Pindar, who is listening in on Franklin's phone while in court to shout out, "My God, My Nanette's a WHORE!).  Eventually, the case is resolved thanks to a patented F&B skit: Jared gets drunk in court to show that his blood alcohol level was fine at first, then over the limit some time later, proving that when Double D set out on his rescue mission, his two beers were under the limit, but by the time he got to the strip club, he was legally drunk.

﻿﻿
Granted, the two main legal defenses Bro-Bono came up with (the 'delayed drunk defense for Double D, the dumb dick defense for Rick Paxton) are a bit nutty, but then again, this IS Franklin & Bash (not the place to go to for sound legal advise).  Still, at least Bro-Bono has enough confidence in itself to know that in the end, a lot of this is silly.

Bro-Bono also works well because it throws great twists, some that make our heroes look downright foolish.  Take for example when the attempt to needle and humiliate Karp by throwing him a surprise "50th" birthday party (even though if we go by Reed Diamond's real age, he was only 44).  Karp, as unflappable as ever, not only just says he's nowhere near 50 but also borrows Bash's guitar and shows them that his skills at shredding are much better than Bash's (or almost anyone's really).  This little bit shows that Damien Karp is actually a human being, one with outside passions and skills, not the monotone stuck-up snob Jared and Peter insist to themselves he is.  Karp is far more formidable than anyone on the show (including the writers) have ever given him credit for.

Bro-Bono was done in by a few details I didn't care for, such as Jared and Peter discussing a scenario where either 'dates' Karp (they're so not-gay).  Another aspect that was not that good was having poor Dana Davis' Carmen endure a second round of vomiting (this time thanks to Jared's boozing rather than Pindar's paranoia).  Come to think of it, didn't Jared cheat when he told Peter after the case that he had secretly drunk more alcohol between the first and second sobriety tests?  Bro-Bono also didn't answer how Swatello's team discovered Nanette was an ex-hooker with a long rap sheet.  Then we have the false trail of a shared mistress, which was I think a way to titillate the audience who goes into lesbo action, but that's just me.

However, Bro-Bono was a good way to introduce some backstory to Jared and Peter, a good way to show Damien Karp has more sides than even he lets on, and has two interesting cases that, while resolved a bit bizarrely, at least made some sense and provided good laughs. 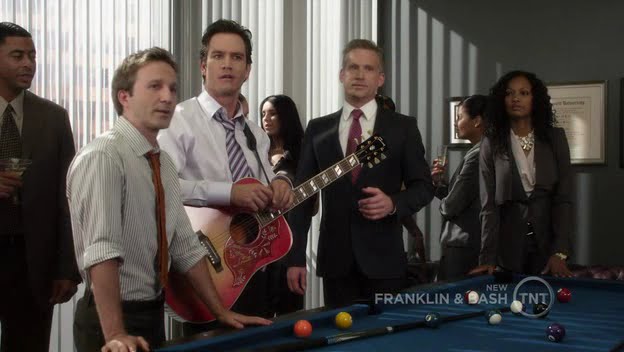 Next Episode: You Can't Take It With You