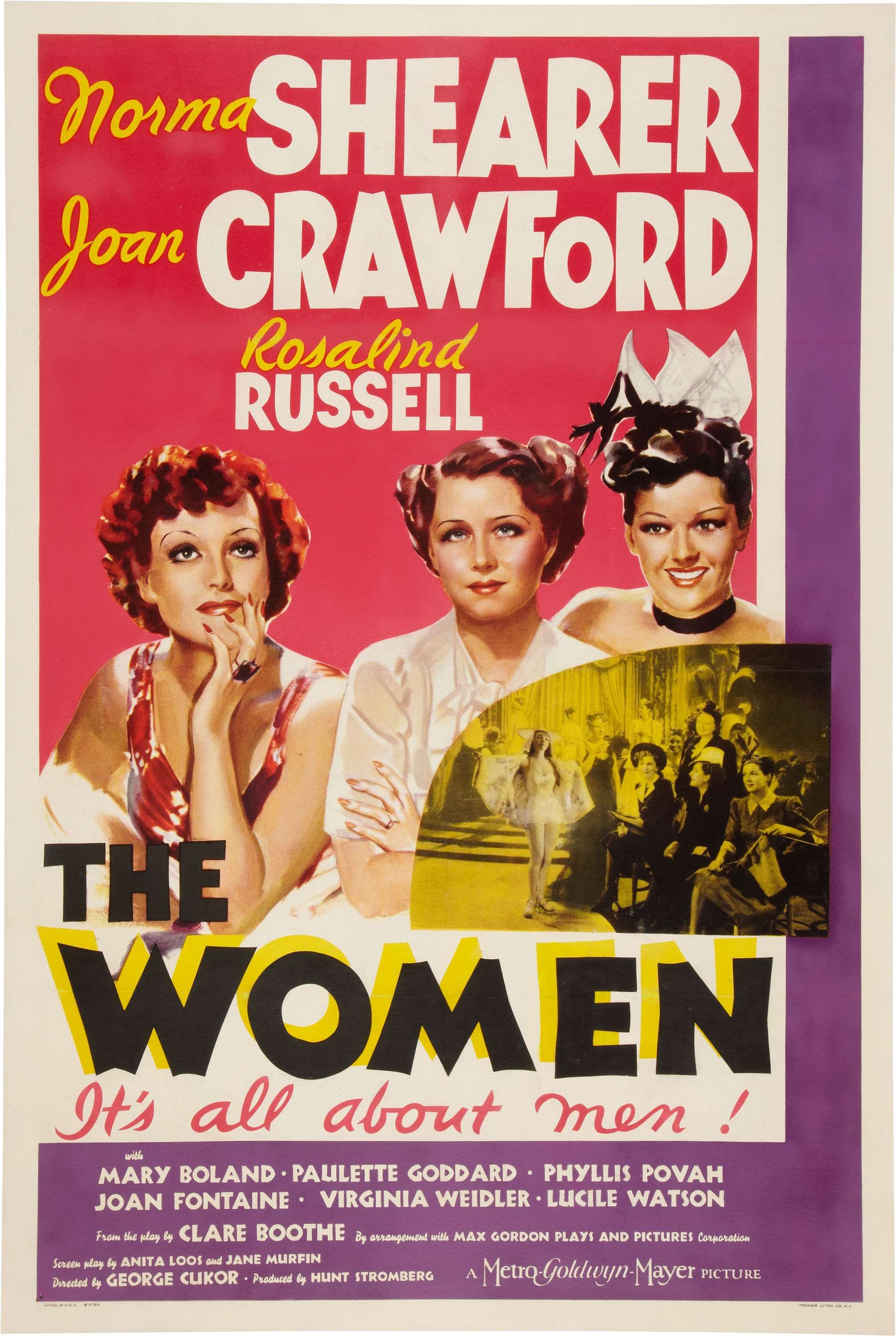 Here's to The Ladies Who Lunch...

The Women is a catfight from beginning to end, as this collection of women in all their shameful glory: their cattiness, their innocence, their viciousness, their wit, and their double-crossing and dealing, battle it out for supremacy.  As sharp as their fingernails (Jungle Red), The Women plays out among an unreal world of elegance where our characters can dress so well and be so horrid.

Mrs. Stephen Haynes (Norma Shearer), or Mary, believes she is in bliss: a daughter, Little Mary (Virginia Wiedler) and a happy marriage.  Little does she know that her best frienemy, Mrs. Howard Fowler (Rosalind Russell), or Sylvia, has come across some delicious gossip thanks to the manicurist.  Stephen Haynes has been stepping out on Mary.  Vicious to her core, she is dying to tell Mary but decides it's best to let Mary find out for herself...by suggesting Mary go to the same manicurist and ask for the new color, Jungle Red.

The manicurist unwittingly spills the beans to a devastated Mary.  Soon, she finds herself competing with Crystal Allen (Joan Crawford), whom Sylvia and her gruesome pal Mrs. Phelps Potter (Phyllis Poovah), or Edith discover is a perfume counter shopgirl.  After going on a Bermudan vacation with her mother Mrs. Morehead (Lucile Watson), Mary decides she doesn't want a divorce but won't stand for Stephen having a mistress.  Therefore, at a fashion show, Mary, egged on by Sylvia, confronts an unrepentant Crystal.  The war is on.

Despite herself, Mary decides on a divorce.  Off to Reno she goes, where she finds another friend, Mrs. John Day (Joan Fontaine), or Peggy, a shrinking violet of a girl, and meets two other women going to Nevada for a divorce: the Countess de Lave (Mary Boland), or Flora, and Miriam Aarons (Paulette Goddard).  The much-married Countess begins a romance with a cowhand named Buck Winston, whom she will turn into a music star.  In a twist, Sylvia herself arrives later for her own divorce, only to discover that her husband's soon-to-be new wife will be...Miriam!  Peggy calls off her divorce when she finds she's pregnant and she and John settle their differences, but Mary isn't so lucky.  Despite a pep talk by the wise (and wisecracking) Miriam, Mary discovers that Stephen married Crystal.

Two years pass, and Mary has contented herself with her new life and friends (much to Mrs. Morehead's disapproval on both counts), while Crystal, still as scheming as ever, has secretly embarked on a new affair, with none other than Buck Winston.  Sylvia discovers this and opts to hold back this delicious information, but no matter. Little Mary has inadvertently revealed this to Mary, who decides to go to a party and turn the tables on Crystal and Sylvia, telling her mother she's had two years to grow claws: Jungle Red.

At the party Sylvia can't help reveal things, and Mary traps both her and Crystal (in Sylvia's case, quite literally) and vanquishes her foe, but not before Crystal gives the best kiss-off lines in film.  "Well, I guess it's back to the perfume counter for me.  And by the way, there's a name for you ladies, but it isn't used in high society...outside of a kennel.  So long, ladies".  And now at last, Mary can be reunited with Stephen. 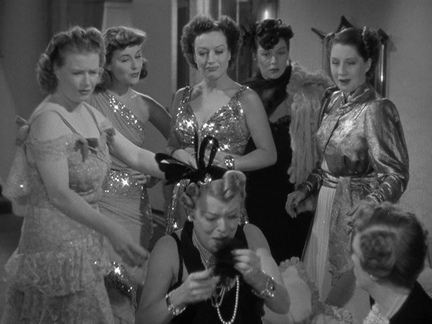 What The Women has in spades is a total collection of all manner of personalities who with the exception of Allen and Aarons has one thing in common: they are all rich.  Part of The Women's pleasure is in seeing this world of lavish wealth where all these women doing terrible things can get away with it.  Before any Real Housewives came our way, The Women gives us everything people love about broads behaving badly, down to catfight, name calling, wife-stealing, and even a fashion show.

The big surprise in The Women is an elaborate fashion show that precedes Crystal and Mary's face-to-face.  Over director George Cukor's objections, this fashion show was put in and while he I think was right in objecting (since it slows the film down considerably) it is quite lavish, with the added bonus of being in glorious Technicolor (which must have been a great delight for 1939 audiences).  However, I found all that fashion business pretty but pointless.

Minus that, The Women has to be one of Cukor's best directed films, as everyone in the all-female cast delivers excellent performances.  Norma Shearer, a name not well-remembered today, was the big star on the MGM lot (her marriage to MGM wunderkind producer Irving Thalberg being of some help in that department, I suppose).  I think her performance is remarkably strong given that she is either forgotten or dismissed: she makes Mary into the sympathetic person she's suppose to be, staying within the boundary between weak and weepie and growing as a woman.

While she's suppose to be the star and has a great chunk of screentime as befits her character, her two other main costars steal the show.  This was Crawford's real big breakout, and in The Women we can see her star rising while Shearer's star falling. There had been a fierce rivalry between Shearer and Crawford at MGM (Crawford complaining publicly about how she couldn't get good parts if her rival was sleeping with the boss) and the intense hatred the two had complements their performances.  As the bitch with the heart of brass, Crawford is unapologetic in how she plays this venomous being.

Curiously, while Mary is the sympathetic one, a certain part of you prefers the gleeful malevolence and determination of Crystal, who will claw her way to the top everyone else be damned.

Finally, there is Russell, who is so comedically malicious and handles both body movements and rapid-fire line delivery, sometimes at the same time, as when she attempts to get back at Crystal when they first meet.  As Sylvia and Edith walk away from the counter as the store is closing, Crystal cattily refers to her as "Mrs. PROWLER", infuriating Mrs. FOWLER.  So determined is Sylvia to get back at Crystal that she and Edith didn't notice a bin in which they crashed and fell into.  We laugh at how horrid Sylvia is.

The other performances were their equal: Fontaine's meek Peggy, Goddard's brassy Miriam (I can imagine a Barbara Stanwyck being her equal), Boland's optimistic Countess (who still believed in 'amour, amour, amour').  We laugh at their antics and marvel at both their duplicitousness and bonds of sisterhood.  The Women has been remade twice: as a musical in 1956 (The Opposite Sex) which got away from the original's total absence of men by including them in the film, and again in 2008 with an all-female cast.

Neither film is remembered today, with the 2008 version particularly reviled.  I think both were probably mistakes, and in the end it's this version that still holds up.

The Women drags a bit, but apart from that it has a witty script and some simply pitch-perfect performances from the whole cast.  In 1939, there were simply too many brilliant films for one year.  The Women takes its illustrious place among all those greats.

Ladies, chapeaus off to you.