Fire Over England: A Review When Elizabethan Hearts Are Aflame...

Fire Over England brought together two of the greatest screen and theater couples of all time: Laurence Olivier and Vivien Leigh.  The fact that they were married to other people did not stop them from beginning a torrid affair that mirrors the couple in the film.  Fire Over England also mirrors the oncoming storm of World War II, though perhaps this was unintentional.  I say "perhaps" because in 1937 it is hard not to think that Britain and Germany would once again take up arms against each other; a film like Fire Over England would serve as a reminder of another time when the sceptered isle was in danger of invasion and triumphed.

Queen Elizabeth I (Flora Robson) is facing enemies foreign and domestic.  She is facing off against her former brother-in-law, King Philip II of Spain (Raymond Massey), determined to win England back to the True Faith and remove the heretic bastard Queen.  Her Majesty has only her loyal treasurer Lord Burleigh (Morton Selton) and Robert Dudley, Earl of Leicester (Leslie Banks), for whom she has always carried a torch.  Beyond that there is no one she can fully trust.

However, a new figure has entered her Court.  It is Michael Ingolby (Olivier), fresh off a daring escape from the Spanish who comes with news of a Grand Armada that is being formed against the Virgin Queen.  Elizabeth knows all about this, but she recognizes a young man with ambition, courage, and above all loyalty to the Crown.  There is one potential hitch: Michael is passionately in love with Cynthia (Leigh), Lord Burley's granddaughter and a lady-in-waiting to Gloriana.  Her Majesty cannot help but notice that Cynthia is young and beautiful, while she...

Still, despite Leicester's bungling of keeping Philip's agent Hillary Vane (James Mason, in one of his earliest roles) alive, there is still opportunity.  No one has seen Vane in Spain (there's a poem in there) and Michael is about the right age and height to match reports.  He also speaks fluent Spanish.  Despite Cynthia's misgivings and open objections, Michael will be bound to the Crown and not the heart.  Therefore, it's off to the Escurial, Philip's palace, to infiltrate the plot.  Michael, however, has issues of his own. 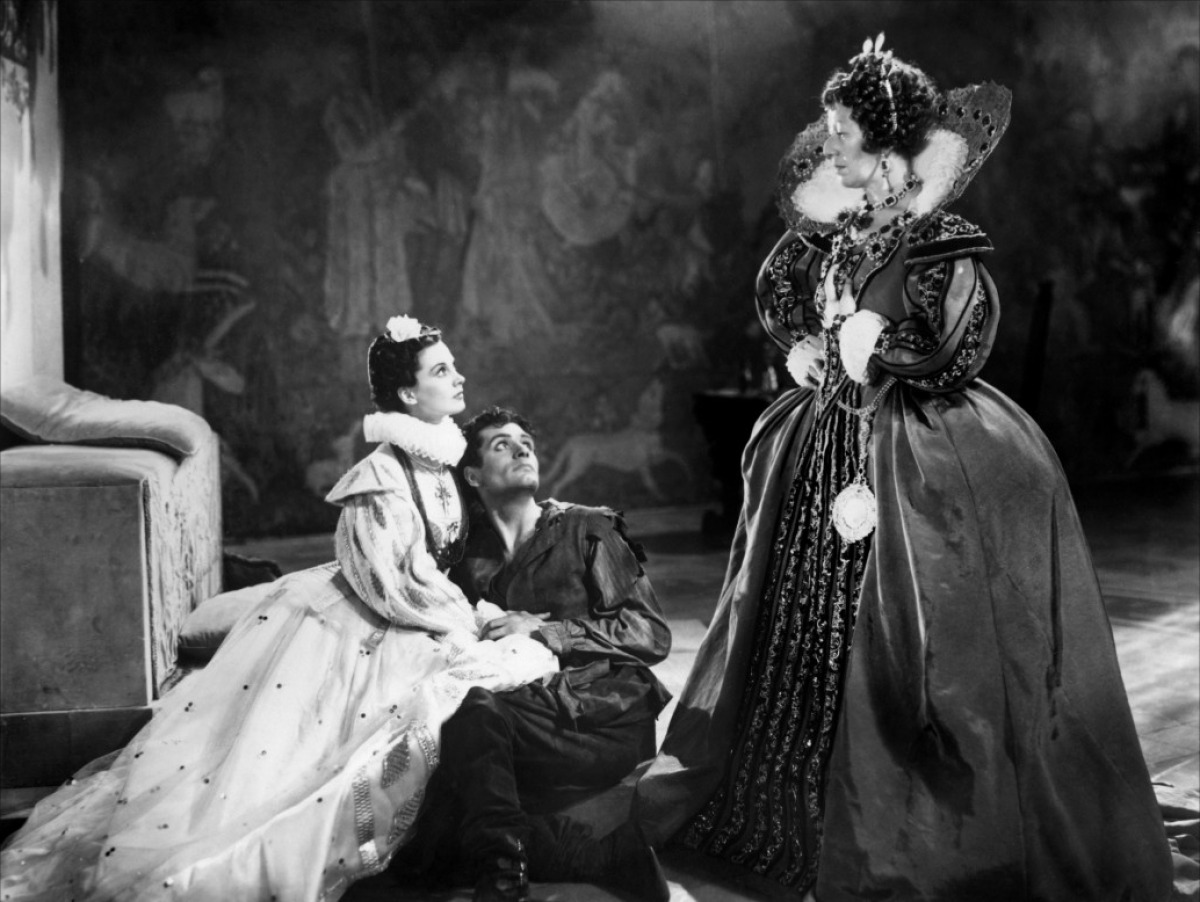 Michael is undone by the Lady Elena (Tamara Desni).  He had met the Lady Elena before, when he was hiding out in Spain before escaping back to Britain.  She still harbors feelings for him, but also harbors hatred for the English, whom she blames for her father's death.  While she doesn't give him away, their closeness raises the suspicions of her husband, Don Pedro (Robert Newton), and his failure to come up with the final name of the conspirator convinces Philip he's not the real Vale.  Nevertheless, to save Lady Elena's honor, Don Pedro 'allows' Michael's escape, and thus he races back to Britain to warn the Queen of who are the vipers at her Court.  She goes to lead the troops herself, unmasks the traitors (who now renounce their former allegiance and return to Liz's bosom, so to speak) and Michael along with the ex-traitors goes to smash the Armada.

With victory assured, Cynthia and Michael are to be married at the same time Gloriana goes to give thanks for her kingdom's deliverance (and her own).  However, she recognizes that no Crown will ever win a young man's heart like that of a pretty face, and while she privately mourns the passing of her own youth, she continues to lead her people into the Elizabethan Age.

It is rather difficult if not impossible to not recognize that Fire Over England was in some way a form of rallying cry to the growing Nazi threat the British were facing.  Certain scenes, certain moments play as if the characters were addressing the Germans rather than the Spanish.  However, even if this were not the case, Fire Over England has several saving graces.

The first are the performances by Robson and Leigh.  As often as Queen Elizabeth I has been portrayed by a variety of great actresses (Judi Dench, Cate Blanchett, Helen Mirren, Bette Davis), I think Robson is perhaps the best (with Blanchett coming in an extremely close second).  Robson shows Elizabeth to be the imperious queen she needed to be, but she also shows a softer, tender side.  In one shocking moment, she slaps Cynthia for giving a smart reply to her line of questioning (when complaining that Cynthia is giving her 'crooked answers', Cynthia retorts, "Crooked answers to cross questions").  However, later on the Virgin Queen softly tells Michael that it is right that he ask Cynthia whether to endanger his life to serve as her spy.  Robson even stops to visit an ill Burley, and shocks her ancient courtier by serving him hot soup in a gentle manner.

Leigh also does a great job of playing the slightly fluttery but endearing Cynthia, who is cheeky and scatterbrained but also bold and daring.  She is openly defiant to her Queen when she insists that it is not right that Michael risk his life again after barely having escaped the first time.  In turns silly and serious, Leigh manages to out-act Laurence Olivier, who looks like he's having great difficulty toning down the more theatrical style of acting for a subtler film performance.

Olivier is highly theatrical in Fire Over England, as if he thinks he is on a London stage and has to basically shout to the gallery. More embarrassing, he never loses an opportunity to show off how vigorous he can be in even the slightest action scene, jumping and leaping about with abandon.  He manages to throw in a little song too, about the courting of an English man and a Spanish lady.  Pity that Spanish Eyes hadn't been written yet, otherwise he would have belted that one out too.

Out of all the performances, Olivier's wild hysterics made the difference between him and all his co-stars (even those with smaller roles like Desni or Newton or Massey, who appeared to take this seriously) all the more pronounced.

However, to their credit Olivier and Leigh look absolutely perfect together, these two people who would scandalize the theatrical world by their torrid affair while still very much married.  Fire Over England captures these two lovers in visually beautiful terms (aided by legendary cinematographer James Wong Howe) and Elizabeth's rousing speech to her troops is among the best moments in the film.

There is also a great wit in Fire Over England.  When reprimanding his wife for keeping Michael's identity secret from him until she confesses, Don Pedro remarks, "The whole trouble comes from treating your enemies like human beings.  Don't you see my dear, that if you do that they cease to be enemies?"  While meaning it as a rebuke, Clemence Dane and Sergei Nolbandov's adaptation of A.E.W. Mason's novel shows the foolishness of Don Pedro's thinking.

Fire Over England drags a bit and Olivier's performance is one of the hammiest of his early career.  However, thanks to Howe's beautiful imagery and both Vivien Leigh and Flora Robson's performances, it is a great treat for those who love costume films, romances, historic pictures and anyone who gets a kick out of reliving the past.