You DO Know You're Beautiful...

The main case involves Jennifer Putnam (Jillian Bell).  She is suing for wrongful termination from Stirred Magazine (a Maxim knock-off) for being too attractive.  Jared Franklin (Breckin Meyer) and Peter Bash (Mark-Paul Gosselaar) jump at the chance, even going so far as to bet their nemesis, Damien Karp (Reed Diamond) that they won't win.  The bet is their office to his Jack White-autographed guitar.  Hanna Linden (Gabrielle Beauvais), who once was involved with Karp and had a one-night stand with Jared, helps Franklin & Bash for her own motives: she cannot stand the idea of Karp getting a larger office even though she brings in more business.

Jared and Peter imagine a supermodel, but are sorely disappointed to see Jennifer is no bathing beauty.  She's not ugly but she certainly isn't one to set libidos on fire.  Karp, who knew what she looked like, feels totally confident of victory, and the boys are terrified he's right.  However, as the investigation into her lawsuit goes deeper, we find that Jennifer's belief in her own beauty (she says that the women at/on Stirred were 'traditionally' beautiful, giving us an insight that she isn't completely unaware of what normally constitutes 'beauty') may not have been the real reason she was fired, but that she was let go unfairly.

The secondary case involves Gene Toy (Leonardo Nam), F & B's go-to tech guy who now has to leave because he has been disgraced in Chinatown.  He's been accused of theft of a rabbit, and the store's owner Mr. Han (Francois Chau) has put up posters around Chinatown saying as such.  Despite the fact that this is defamation (as there was no actual arrest or charges against Gene as far as I could tell), Franklin and Bash end up making matters worse when they ask Mr. Han to take the signs down.  Not only does he not, but he throws Franklin & Bash's pictures up there, saying they are sleazy lawyers for defending this criminal.  The boys are desperate to keep their Toy as he can fix anything for them (and allow them to continue playing video games and let Pindar download his porn at the same time).

In the end, with Stanton Infeld (Malcolm McDowell) taking Gene's case to what he thinks is a secret Chinatown Council of Elders (in reality, a merchant's association) we find that Mr. Han wants to drive out Gene only because of a certain employee he has called Tonia Han.  Wonder why... 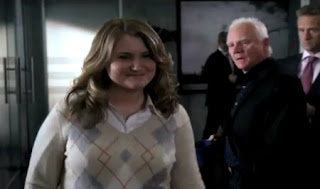 As for Jennifer's case, looking at Jennifer's interaction with Stirred's founder Big Mack (Robin Thomas) versus Big Mack's daughter Katherine (Rebecca McFarland) we find that in a sense, Jennifer was indeed too beautiful to work there.  When Big Mack on the stand says he thinks of Jennifer as like a daughter and not like the bevvy of beauties he's slept with, it's all over.  They settle the case: Jennifer gets her job back (and goes to being Big Mack's assistant) and Jennifer asks that the plastic surgery benefits package (offered to all Stirred employees as part of their overall health care) go to Smile Train, an organization that provides cleft palate surgeries to children in developing countries to restore their faces.

Yes, indeed, Jennifer is quite beautiful.

Seeing Jennifer of Troy again, it brought back positive feelings towards Franklin & Bash, when the show operated on logic rather than only gimmicks, when we were given odd cases but ones with heart.  I dreaded the main story because it ran the risk of turning Jennifer into a joke.  However, over the course of the episode we see that Jennifer isn't delusional.  Instead, she is supremely confident in herself.  Yes, she is not 'traditionally' beautiful, but Jennifer instead has an ability to charm and disarm people, going easily through life thoroughly aware that people will see her as she sees herself.  If she sees herself as beautiful and fascinating, others will too.  Indeed we find that this the case, as Infeld, a man who is no stranger to the charms of ladies, finds himself all but besotted by Jennifer thanks to her ebullient nature and inability to perceive that anyone wouldn't see her in any other way.

Bell leads the guest stars in a great performance.  She's bubbly without being insipid, charming without being cloying, and so assured of her beauty that even when one wants to persuade her otherwise, one either doesn't have the heart or the logic to change her mind.  The other guest stars (such as Nam and Choi) did what they could to make their characters realistic, though given that the Chinatown story was not as good gave them limited material to work with.

Out of the main cast, I think Diamond did the best.  He continues to be my favorite Franklin & Bash character (is there such a thing as Team Damien?), and we see this at the end, when he gives up the guitar.  Whatever Karp's faults, he is a man of his word.  He is also funny without being completely stupid.  Hanna asks him if he'd like to try beer Jenga, and he asks if it's imported. 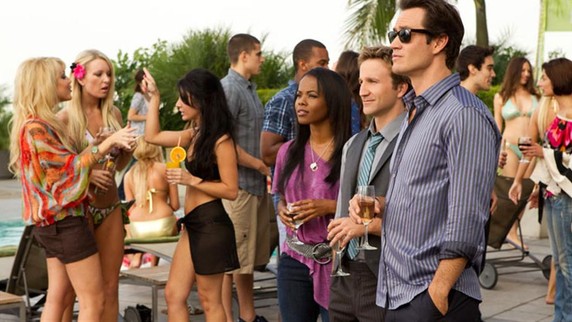 The story also has genuinely funny moments.  When Jared and Peter walk in on Karp attempting his best kowtow while in front of Infeld, Karp retorts, "Oh, I'm just fluffing.  You're next."  Personally, I was astonished that both Damien and Reed could say such a thing (or that Karp knows what 'fluffing' is).  I found it both funny and daring.  It's also hard not to smile when Jennifer refers to herself as "the Norma Rae of beautiful women".

The one aspect I wasn't thrilled about was Franklin & Bash's boy Toy.  This whole 'aren't the Chinese really odd' business skated close to being stereotypes, and the fact that they cared for Gene only so far as what he could do for them (fix their hardware) makes them rather terrible people.  Further, how neither Jared and Peter figured love was at the center of this whole brouhaha I don't get.  Then again, Jared thought that Chinatown was full of triads and 'black rain'.  In a rare turn of events, it was PETER who told him that 'black rain' was related to Japan not China.  Usually, Peter is the idiot.  However, somehow I got the sense that Jennifer of Troy was ridiculing more Infeld's ideas of the Chinese (such as the legendary Council of Elders) than the Chinese themselves, at least by the end of the episode.

With Franklin & Bash being such a mess today, it is nice to remember and rewatch episodes like Jennifer of Troy.   Stories like these are the reasons I loved the show, finding it a great mixture of comedy and heart.  Now I think that Franklin & Bash has devolved into one where our heroes grow more stupid, the cases more nonsensical, the tone more harsh.   However, for now I find that at least the First Season of Franklin & Bash was like Jennifer...quite beautiful.