Lust for Life: A Review 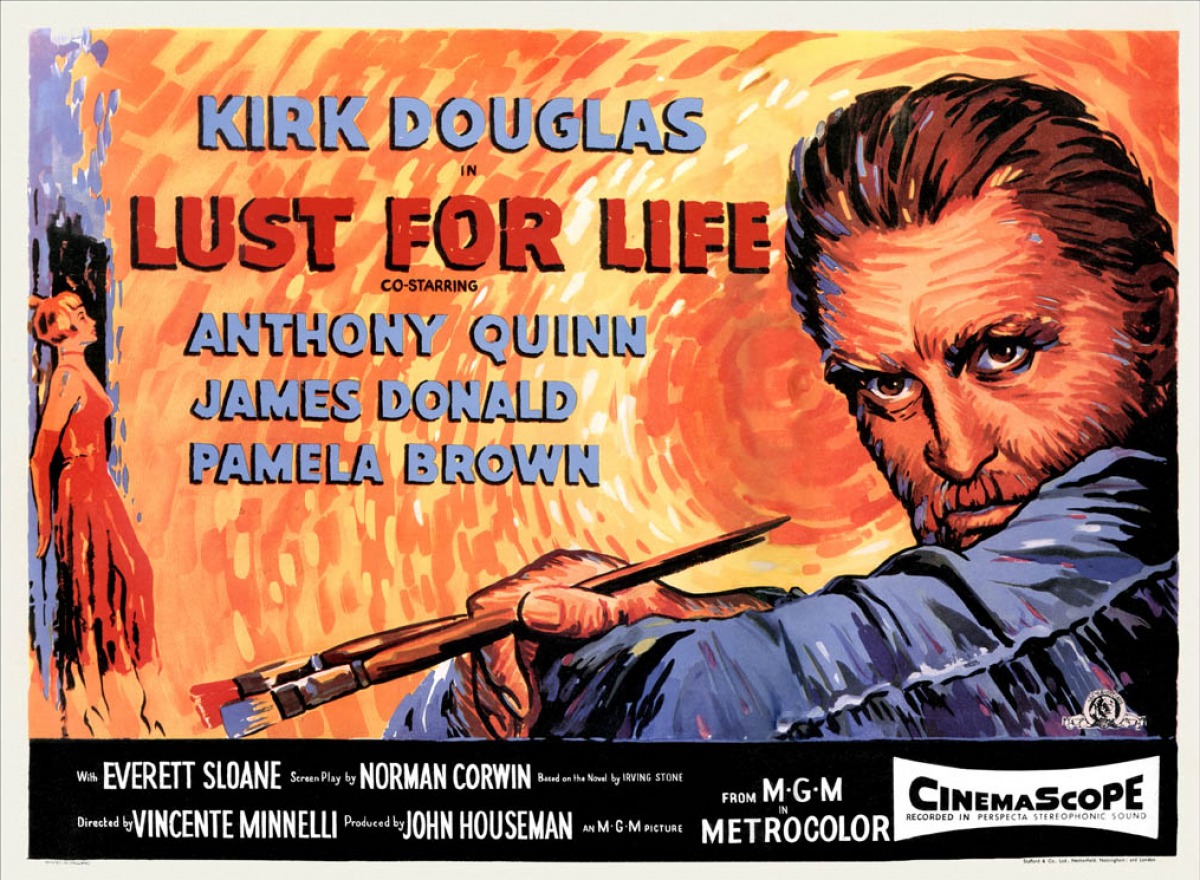 Now, I love the works of Vincent van Gogh as much as the next guy.  That being said, I went into Lust for Life, the biographical film about van Gogh, with certain expectations.  I can say that I was disappointed by the end result, but there is barely enough to warrant a viewing.

The film follows the life of Vincent van Gogh (Kirk Douglas) as he struggles to find his way in life and with growing mental instability.  He thinks first he should follow in his disapproving father's footsteps and serve as a preacher, but finds that he is uninspiring in sharing the word of God to the miners.  Instead, he basically becomes one of them, sharing in their intense poverty, much to the disapproval of the missionary group that sent him (most reluctantly, I might add).  Returning home, he starts to draw and paint full-time but he just can't help himself.  Arguing with his family over faith, he declares his passionate love for Kay (Jeannette Sterk), a recent widow horrified by his intensity.

He leaves after she rejects him constantly and goes to Paris, to find himself in the arms and home of Christine (Pamela Brown), a laundress, who sometimes looks for easier work, and we'll leave it at that.  While there, he meets with a cousin in the art world, who sees potential in his work.  He also gets the ever-loyal support of his brother Theo (James Donald), with whom he lives with on and off and who supports him morally and financially.

Eventually, even Christine finds Vincent too poor to tolerate, especially when he spends what money they have on paint versus food.  Vincent does find some compatriots in the art scene, particularly Paul Gaugin (Anthony Quinn), whom the other artists admire.  They move in together in the south of France, but their relationship, like all of Vincent's, is an extremely tempestuous one.  After one violent clash, Vinnie slices off his ear (which makes the town mock him).  Vincent goes to a mental institution, comes out, and eventually shoots himself, believing he died a failure.

What I really found if not hilarious but overblown in Lust for Life was Douglas' Oscar-nominated performance as Vincent van Gogh.  It seemed there was one speed Douglas had: INTENSE with a Capital I.  Sometimes it looked like he was less acting than he was attempting to do his version of a Frank Gorshin impersonation of Douglas.  It was all one-note: uber-intense to where it is becomes almost parody.  This is a real shame because I thought that when Douglas showed a calmer side (as when he was gently wooing Kay before going all intense and out-of-control) we saw what would have made van Gogh a fascinating figure, someone whom people could live with and admire.

However, this wasn't what we got.  Instead, we got the worst traits of Kirk Douglas: an inability to tone things down, a chance to see him go over-the-top repeatedly, and constantly screaming and posing all over the place.

It's interesting that Anthony Quinn won his second Oscar for his supporting role as Paul Gaugin despite appearing halfway through Lust for Life and leaving long before this very long film is over.  Essentially, he is there just in the middle of the picture, but I see Quinn gave a solid performance.  Unlike Douglas, Quinn wasn't overacting or being big.  In fact, Quinn toned things down at times as Gaugin, his final scene when he leaves the injured van Gogh being quite subtle.

Anthony Quinn, not known as the most subtle actor working at the time, managed to make Douglas' broad interpretation more outlandish.  I personally would have preferred a shorter film about their troubled relationship (an early example of frenemies) and/or a film about Paul Gaugin himself.

I wasn't too thrilled with the voice-over by Donald as Theo, having never enjoyed voice-over myself.

Director Vincente Minnelli did have some beautiful imagery, bringing a lot of van Gogh's world to life in stunning and impressive cinematography.  There was one point when one could see it was obviously a set (the 'field' where Kay and Vincent go together), but apart from that the attention to detail was rendered quite well.

I never felt we really got to know Vincent van Gogh.  I think we got instead was Kirk Douglas going over-the-top, doing an impersonation of a Kirk Douglas performance.  I don't see why people think it is a brilliant performance.  When I wasn't struggling to stay awake I found myself at times laughing at Douglas (particularly when the townfolk come to mock van Gogh and he becomes predictably hysterical).  If I were to recommend something, it would be the MGM-produced documentary Darkness Into Light, which was created to promote Lust for Life.  I found that short film more involving, interesting, and informative about van Gogh than this biopic.

Still, it is very pretty, and Anthony Quinn is quite good in it.  Those are pluses, minor as they are.  If given the choice, however, I'd pick the song over the film.