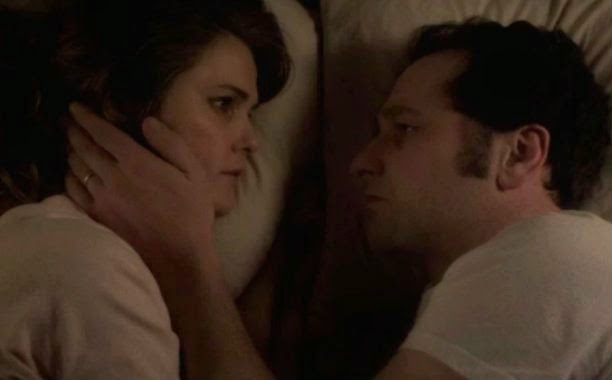 I jump back into The Americans, one of the best shows on television which I hope is (re)discovered now that Breaking Bad and Sons of Anarchy are no longer on the air.  For too long The Americans has lingered in the shadows, like the spies the show focuses on.  Now that school has ended, I go back to the twisted, sordid, sad lives of Philip and Elizabeth Jennings, seemingly normal, average Americans who are really Soviet spies determined to bring down America...while raising two kids.  Salang Pass was a bit of a breather for me, an episode that is setting up other stories that I figure will have shocking or sad conclusions.

Philip Jennings (Matthew Rhys) has major women trouble.  "Clark" is getting pushed by his wife, Martha (Alison Wright) to take on a foster child if he won't have children himself.  The Center wants him to become intimate with Kimberly (Julia Gardner), the fifteen year old not much older than his daughter Paige (Holly Taylor), whom the Center also is pushing him to get to join them in espionage for the Soviet Union against his determined wishes.  Paige, for her part, wants to get baptized, which doesn't thrill her atheist, Communist parents.

Philip's other wife, Elizabeth (Keri Russell) is determined to get Paige to turn against the country of her birth, but she has her own issues.  She needs to get Lisa (Karen Pitman) to start getting information from her employer, Northrup.  Of course, this means getting rid of innocents who are getting in the way of Lisa getting a promotion.  Meanwhile, across the street there's FBI Agent Stan Beeman (Noah Emmerich), still pining for Nina, the Soviet he turned and fell in love with.  In what can be called the strangest joining of East & West, Stan goes to Oleg Burov (Costa Ronin), Nina's Soviet lover/coworker to come up with a secret scheme to discover if an alleged defector is really a double agent.  Stan believes that if the FBI can confirm the defector's duplicity, they can make an exchange for Nina.

All these plans are slowly coming together, but at a very high price, particularly for Philip, who in the end flashes back to his KGB training of seduction.  He recalls having to have sex with young and old, women AND men, and now he finds himself struggling with his conscious about sleeping with a minor.  Their minder Gabriel (Frank Langella) gives him these words of wisdom, "Conscious can be dangerous". I think that Salang Pass, in fact, The Americans as a whole, could use that as their theme.  Philip and Elizabeth Jennings are actually good people.  Tragically, they are also good in their profession, which involves murder, deception, seduction, blackmail, and did I mention, murder?  Salang Pass is really Rhys' hour, and he does so well that one wants to shake the Emmy's collar and say, "ENOUGH WITH BRYAN CRANSTON AND JOHN HAMM...TAKE A LOOK AT THIS!"  In his regrets, in his fears, in his love for Paige, we see that Rhys brings all these complexities to the forefront.  It is a great performance, one of many that Rhys gives again and again.

Russell too excels as the more cold and committed Elizabeth, but we see that there are twinges of remorse in her actions.  When she kills a Northrup employee by removing the jack as he was fixing his car, it is a shocking sight, in the coldness and ruthlessness of it all.  However, we see a flicker of what could be horror at her own actions, how someone died to move the Directive's plans but who was totally innocent.

Garner too was a standout as Kimberly.  She had a great moment when she talks about her lost garden, one that she had as a child but which her stepmother removed.  Stephen Schiff's script gives her monologue about that lost garden a brilliant double meaning: both the literal loss but also the loss of her childhood, and when she talks about how she wouldn't be surprised if her parents had 'another family' somewhere, it must have hit Philip especially hard.  It's already bad enough that his conscience is gnawing at him over having sex with a girl who could be his daughter, but to hear that and imagine Paige could say that too must have been agonizing.

Schiff's script also gives us brilliant foreshadowing when Yousef (Rahul Khanna), the Pakistani intelligence officer they're blackmailing, tells Philip that the Soviets are fighting barbarians.  It will be a mere twenty years before the real Americans find themselves fighting the same antagonists that bedeviled the Soviets.

Salang Pass is really a brilliantly acted episode all around.  Perhaps because it is just setting up for the stories that are coming at us full force, which is why I don't rank it higher.  However, on the whole we see that the cast and crew can do so much with so little.

Next Episode: Born Again
Posted by Rick at 2:59 PM