Oscar Deals With His Drinking Problem


The 18th Academy Awards had drinking on its mind.  It was the first Academy Awards to take place in peacetime, and one would imagine winning the war and the Oscar would make anyone take to the bottle. The Lost Weekend, a message picture about the evils of Demon Rum, took home top prizes.  Oscar even went to bed with Joan Crawford (I leave it to you to make your own snide remark).

Again, we have far too many nominees to type out (14 Best Song nominees).  I'm far too lazy to work on them, but I can report that the winner, It Might as Well Be Spring from State Fair, was written by perhaps the greatest songwriting duo in history: Richard Rodgers and Oscar Hammerstein II.  Curiously, Hammerstein became I think one of the few people named Oscar to actually WIN an Oscar.  For my part, I think Rodgers and Hammerstein are brilliant.

All things being fair though, It Might as Well Be Spring is a wonderful song, and one that is somewhat well-remembered, but maybe not as some others from the Rodgers & Hammerstein songbook.   Personally, I think both It's a Grand Night for Singing and the title song to State Fair, their only musical made for the screen (versus a screen adaptation), are better.  There are at least two Best Original Song nominees that are the winner's equals, or at least one that is most definitely remembered.  Whittling it down to five nominees out of the 14, I give you my list, along with my winner...

It Might as Well Be Spring from State Fair
Aren't You Glad You're You from The Bells of St. Mary's
I Fall in Love Too Easily from Anchors Aweigh
Some Sunday Morning from San Antonio


From Here Come the Waves, Accentuate the Positive.  Music by Harold Arlen, lyrics by Johnny Mercer.

I think it's a safe bet that Here Come the Waves is not in your DVD collection.  I certainly hadn't heard of the film, and it would probably be forgotten completely save for Accentuate the Positive being written for the film.  This song, or at least its title, has become a saying people recognize, and the upbeat jolliness of the song goes with the optimistic message.

You also have two great songwriters who come close to Rodgers and Hammerstein: Harold Arlen and Johnny Mercer.  This number is now part of the American songbook (who had perhaps its best interpreter in Ella Fitzgerald).  I also think if you played Accentuate the Positive, they would recognize it, something I can't say about It Might as Well Be Spring.

I can't shake the idea that Billy Wilder's win for The Lost Weekend was a bit of a consolation prize for having lost the year previous for Double Indemnity.  It does put Wilder and Leo McCarey in odd positions of being people who both lost to the other and won over the other.  I don't know if we've had a case of two directors going up against each other two years running with one beating the other.  I don't know if anyone else was nominated for directing a sequel to a film that won Best Picture before (certainly since, as Francis Ford Coppola proved).  Be that as it may, Wilder's win cost Hitchcock an Oscar, and in what can be a sad irony, Wilder's second of his two Best Director wins in 1960...cost Hitchcock an Oscar.

Looking over the list of nominees, I'm surprised Michael Curtiz, one of my favorite directors, wasn't nominated for the noir masterwork Mildred Pierce.  I also see Fritz Lang, one of the true pioneers of cinema, got ignored.  Still, I'm going for Hitchcock for the psychological suspense of Spellbound, and despite my general Hitchcock love this is the first time I give him the Best Director prize.

Revere did an excellent job as the very understanding mother, but I'm pulling for the bitch of the bunch.  Arden was a quip-spouting machine in Mildred Pierce, and while I think Lansbury really pushes herself to being a potential upset I'm choosing Ann Blyth's turn as the monstrous Veda, the most corrupt and spoiled child in film history.  It isn't often that you literally want to hiss at a person, but Blyth's Veda is as evil as they come: thoroughly selfish, spoiled, emotionally bankrupt, and shameless in her greed.  I get the sense that in real life Ann Blyth is really a sweet lady, which makes the performance all the more brilliant.

Yep, this year the Academy certainly was fond of its drunks.  Apart from the biopic, having a chemical dependency is almost a sure-fire way to get at least a nomination (this year's winner, The Lost Weekend, then in the future Smash-Up: Story of a Woman and Leaving Las Vegas being fine examples).  For now, we go to Dunn's portrayal of the loving but flawed father in A Tree Grows in Brooklyn (by flawed, I mean 'on the sauce').  Given his real-life battle with alcoholism, there's more than a touch of irony that he won for playing an alcoholic.

Jack Carson was never given his due.  He tended to specialize in amiable fellows, the kind of guy you could have a laugh with.  Here was this guy, built like a linebacker, who could do a light soft-shoe and sing a little with the greatest of ease and/or charm.  He was comedic, which is where his forte lay, but Mildred Pierce I think is one of his best performances.  He still had that amiable nature to him, able to wisecrack with the best of them.  However, in Mildred Pierce, there was a darkness, a menace to him.  He was less a ham and more a wolf: sleazy, amoral, willing to take advantage of the situations presented to him (and perhaps, take advantage of Mildred herself).

Jack Carson really never got the credit he deserved as a serious actor or even as the light-hearted entertainer he was.  His death from cancer at age 52 robbed us of a great actor.  Yes, I'm a Jack Carson fan, and I wish there were more. 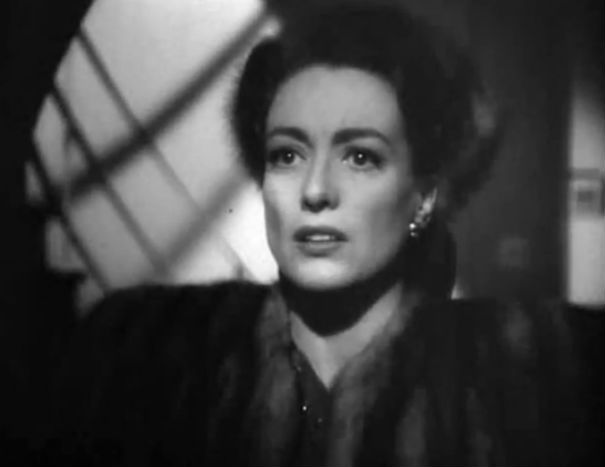 You have a curious thing among the five nominees for Best Actress.  Three of them are at this point, already Oscar winners (Garson for Mrs. Miniver, Jones for The Song of Bernadette, and last year's winner, Bergman for Gaslight).  The other two are both first-timers, which is particularly surprising given how long Joan Crawford had been around by the this time.  Never dismiss the power of a comeback role, which is what Mildred Pierce was.

Crawford, having moved to Warner Brothers after being dumped by her home at MGM for being "box office poison", was terrified that another flop would permanently kill off her career (which for her, WAS Joan Crawford).  She wasn't considered the first choice to play the long-suffering mother to the daughter from Hell.  Bette Davis, Queen of Warners (I think at one point, she was billed as The Fifth Warner Brother) had turned it down.  Curiously, so had Rosalind Russell.  Even more humiliating (at least to Crawford), she, this major star, had to audition for the role like anyone else.   Michael Curtiz, who had adamantly opposed Crawford, did a major turnaround, and guided Crawford to her signature role.

As a side note, I remember watching Mildred Pierce with my mother.  At the end, Mom got up in a dramatic fashion that would have made Crawford proud and declared, "THIS is MY life".

I guess that would make me Veda...

Tierney gives a bone-chilling, brilliant performance as the manipulative, murderous femme fatale.  I was also taken by both Taylor as the optimistic Velvet Brown and Garland's war wife in The Clock.  However, for the moment, I'm sticking with Crawford.

Bing Crosby makes history as the first person to receive Academy Award nominations for playing the same character, a rarity.  Off the top of my head I can think of Al Pacino as Michael Corleone and Cate Blanchett as Queen Elizabeth I as others who achieved this, but apart from that I can't think of anyone else.  I think Wilde is sadly pretty much forgotten, and Peck, well, something tells me I'm not a big Gregory Peck fan, or at least as I once was.

In what can be seen as clear-cut idiocy by the Academy, Anchors Aweigh would be Gene Kelly's ONLY Oscar nomination, period.  He would not be nominated again for anything: Best Actor, Best Director, nothing, with only an Honorary Award in 1952.

I live in a world where Gene Kelly never won an Oscar and got exactly one career nomination, but Crappie Redmayne wins one for his robotic Stephen Hawking.  Mad World...

Ah, Eddie.  Never got no respect.  Again playing against type, Robinson's meek painter/cashier bedazzled by a femme fatale and paying a heavy price, we see how good Robinson was at all his work.  He was typecast as a gangster, but his true genius broke through, allowing him to play all sorts of characters good and bad, brilliant and dim, wise and foolish. 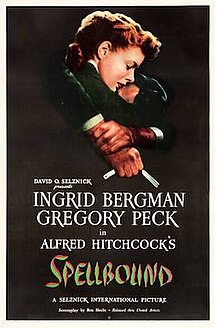 I really don't have anything against any of the nominees.  Each is a solid piece of filmmaking and does what it intended to do (laugh, cry, or create suspense).  The Bells of St. Mary's holds the honor of being the first sequel nominated for Best Picture, a rare feat that I think has been done twice more (The Godfather and Lord of the Rings Trilogies, along with Toy Story 3).  Therefore, one really is spoiled for choice.  Having said that, my heart and mind tell me that the mystery Spellbound, involving psycho-analysis and weird Salvador Dali-esque dream sequences (which sadly aren't as long as I would have wanted) is the one that stands the test of time.  The Lost Weekend is a very good film, perhaps undone by a forced happy ending, but as a study of a man controlled by alcohol, it's dramatic without being overly so.

Still, I hold on to being Spellbound...

For the moment, I'm sticking with my original choice, though I think both Leave Her to Heaven and National Velvet are fine pictures.