A Dip In The Bates Gene Pool...

I wonder when we'll have the Bates Motel episode called The Pendulum, so we can have a tie-in to Edgar Allan Poe.  The Pit is an episode that made me wonder whether the characters were actually rational.  Yes, Bates Motel couldn't survive without the crazy, but this is a time where I call Norma Louise Bates' ideas into question.  Still, more on that later as The Pit, while not as strong as some of the other episodes, still is a cut above the norm (or Norman).

True to his word, Bob Paris (Kevin Rahm) is digging a pool for the Bates Motel per his agreement with Norma Bates (Vera Farmiga).  However, she didn't count on Paris' duplicity, as the hole he's digging is way too deep for a pool (unless it's for skydiving).  As the hole gets bigger Norma attempts to get Paris to either make it smaller or put a stop to it altogether, but he's constantly unavailable.

He's too busy torturing poor Professor James Finnegan (Joshua Leonard), unwitting victim in Norma's web of deceit and deception.  Paris suspects the good doctor, whom he knows has slept with Norma (which is a violation of the code of conduct for his profession), knows about the USB and/or some of Norma's secrets.  A little torture produces the desired effects: he tells Paris about how Norman killed his father and Norma covered it up by claiming it was an accident.  As a way of getting back at his fierce nemesis, Sheriff Alex Romero (Nestor Carbonell), Paris maliciously tells all the sordid details he worked out of Finnegan.  Romero confronts Norma about this, but she insists she's an accidental widow.  Romero walks away.

Emma (Olivia Cooke) who may have turned to her boyfriend's brother Dylan (Max Thieriot), breaks up with Norman (Freddie Highmore).  Dylan for his part has agreed to take a gun-smuggling job from Chick (Ryan Hurst), with Dylan's dad Caleb (Kenny Johnson) insisting on going.  Caleb does not trust Chick, and once in Canada for the drop-off he finds his suspicions confirmed.  Chick was the one the smugglers wanted....to kill, but Dylan is good enough to send a message.  Caleb, suspicious, had planted a gun for emergencies, and used it to save his son's life.

Norma goes looking for James, whom she sees running for his life.  He tells her what Paris did to him, how he told them everything, and to never look for him again.  She tells Norman, who is outraged by her revelations to her tryst.  He blacks out again, and when he does rally he runs after his dog, only to find an old friend back in town: Bradley (Nicola Peltz). 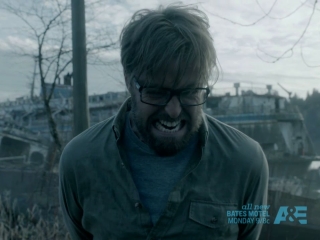 There were a couple things I wasn't thrilled about.  At the very top is the return of Bradley.  I think this was done to provide some kind of shock, but Peltz was always a bit of a weak link in Bates Motel, not a particularly good actress.  Given the show ends its third season in two episodes, I don't half fancy her chances and don't really care about her.

Second is the Chick subplot.  Not only have I never cared for the Mac Powell from Third Day lookalike, but the twist that he was the one the smugglers wanted to kill and that Chick betrayed them is nowhere near a shock.  I figured Chick was not to be trusted.

However, apart from that The Pit is a strong Bates Motel episode.  It's a shame to see Leonard's Finnegan go, and I was upset to see the innocent psychiatrist physically tortured, another victim caught up in the chaotic world of White Pine Bay.  In his final performance on the show, he gives it his all and succeeds in making the Professor a sympathetic and frightened man, who once loved Norma but like all the men entangled in her web finds she's simply too hot to handle.

Cooke and Thieriot continue to have great work together as Emma and Dylan, where a new term, Dylemma, now becoming the shipping of the season.  Cooke has her best work so far both with Thieriot and with Highmore, her breakup scene not big or overblown but quiet and natural.  Kenny Johnson too has great moments as Caleb, one who knows the darkness of man more than his son/nephew and who shows he can be heroic and shrewd.

Farmiga continues to shine, making Norma almost naïve and innocent in her way about how she sees she's been duped, apparently unaware as to why people would leave her.

However, she proves either Norma's blindness or her version of insanity when Norman tells her his fears about being sexually attracted to her.  Norma dismisses both Norman and James' concerns by rationalizing things, telling her son he's going through puberty.  Either Norma is completely unaware of just how dangerous her son is or she is willfully blind.  Norma knows her son killed at least one person and has probably killed others, but she continues to let her blind love for him blind her to the truth about Norman Bates.  In her way, she is contributing to his descent.

Just after telling him that he needn't worry about being sexually attracted to her, she has him cuddle with her.  "You are my whole world," she tells him, which is the worst thing she could tell a boy who just told her he was becoming obsessed with her sexually.

I'm not crazy about having Bradley back.  However, given the show, I don't think I have too much to worry about in that department.