The Americans: Do Mail Robots Dream of Electric Sheep? Review

THE AMERICANS: DO MAIL ROBOTS DREAM OF ELECTRIC SHEEP?

Obviously, Do Mail Robots Dream of Electric Sheep? is a rip-off of Philip Dick's novel Do Androids Dream of Electric Sheep?, which was the basis of the classic Blade Runner (and as a side note, I am on the record opposing a sequel).  Maybe that's why I thought it was a little too cute for my taste.  That, however, is the only 'cute' thing about DMRDOES, for it is a quiet episode, one that is haunting, dark, and has us see that the leads in The Americans can be quietly monstrous, even if it is duty to the State.  In short, DMRDOES reminds of the ugliness of their business, starting at the opening of the episode and ending with it.

Philip and Elizabeth Jennings (Matthew Rhys and Keri Russell) have been instructed to plant a bug on the mail bot that Agent Gaad smashed in a fit of fury.  They aren't convinced this is the best use of resources, but like all workers, they have to do what Upper Management tells them.  As the mail bot has been sent to repairs, they go to the repair shop to install the device.  They hear that someone may be in the building, so Elizabeth goes to investigate.  There, she discovers Betty Turner (Lois Smith), the widow of the family company's founder who checks the books at night, preferring the silence in the night she says puts her 'in tune').   Elizabeth holds her hostage while Philip continues working on the device, but both know that Betty cannot be allowed to live.  Accepting this, Betty soon starts talking about her late husband, his war record, and her son.  At least Betty knows that her son will not be targeted, so that puts her at some ease.  However, Elizabeth has to kill her, but in a perverse act of mercy, she allows Betty to overdose on her heart medication rather than flat-out shoot her.  In a way, Elizabeth gives her fellow Liz an honorable way out.  They keep talking as Betty takes more pills, eventually succumbing to the overdose.  While she doesn't say anything, Betty's slow death affects Elizabeth, while Philip remains unaware of what has gone on.

Meanwhile, Elizabeth had to dump her protégé Hans (Peter Mark Kendall) since she thinks Todd (Will Pullen) might have spotted him.  Hans takes care of things personally, in a brutal way...he finds Todd working at a storage facility and slaughters him (stabbing his eye at one point as Todd makes a desperate bid to escape).  Facing death is Zenaida (Svetlana Efremova), the defector FBI Agent Stan Beeman (Noah Emmerich) suspects of being a mole.  He cooks up a scheme with Rezidentura officer Oleg Burov (Costa Ronin): Burov, in disguise, will break into Zenaida's hotel room and threaten her for being a 'traitor', then 'attack' Stan as he comes in with her dinner.  Philip, for his part, confronts his minder Gabriel (Frank Langella), and the rage he has towards him for interfering with his family is barely contained. 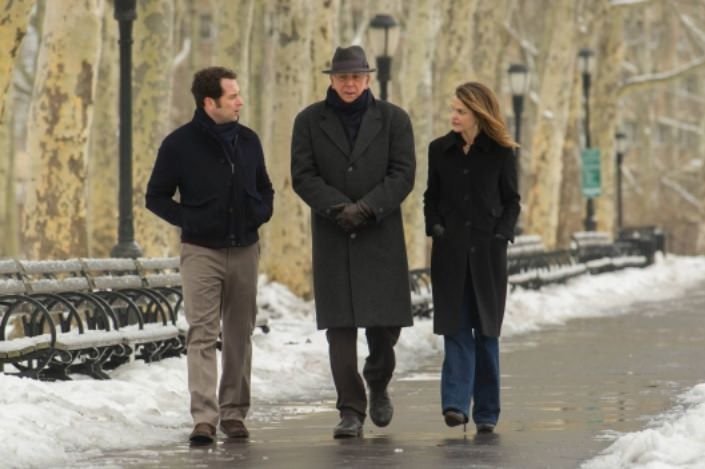 I think Do Mail Robots Dream of Electric Sheep? is a shocking and sad episode, one that forces us to deal with things we haven't, or at least haven't for a while.  The bulk of the episode is between Russell's Elizabeth and Smith's Betty.  For my part, I think Lois Smith should earn an Emmy nomination for Outstanding Guest Actress in a Drama for her performance.  It is simply pitch-perfect: heartbreaking in the fact she knows she will die, mournful as she remembers her family, and even brave when confronting the Soviet agent.  It's been about a week or so since I saw it, and it still haunts me, particularly her final moments.

Russell herself might consider submitting this episode for Emmy contention.  It is difficult to act quietly as you kill someone, to attempt not to show emotion when you know the character is herself tortured regarding her act.  As Betty slips away, we see that she doesn't want to react, doesn't want to feel, but she does, and for someone who is dispassionate about executing others (versus her more sensitive husband), at least this time we see Elizabeth can be just as overwhelmed by things as he can.

The subplots involving Hans and Zenaida are equally effective.  Hans' brutal act is shocking (and yes, graphic) and I figure it was done to keep Hans working, but I also wonder whether in the future Elizabeth doesn't put two and two together.  It would be extremely convenient if Todd just happened to die, and die in a particularly vicious way, and NOT have her wonder.  Will she approve?  Will she be angry that Hans overrode her promise to Todd to let him live?

Regarding Zenaida's story, it is interesting that Oleg managed to spout off revolutionary gibberish so easily, as if by rote.  It's as if even he doesn't believe it and knows it to be nonsense.  I like how well Ronin and Emmerich work together, forming the strangest double-act in espionage, all for the sake of saving Nina.

Perhaps my only dislike is how quickly Martha is dispensed with.  I felt so sad for her when she got a call from the foster agency and told them she wasn't going through with it.  Martha has wanted a child so badly, and knowing that she had to turn down perhaps her only chance must have been heartbreaking.  Yet that, and the fact that she is a bit of a ticking time bomb are kind of just hanging there.

Do Mail Robots Dream of Electric Sheep?, however, has brilliant acting all around (PLEASE GIVE LOIS SMITH AT LEAST A NOMINATION!) and some brutal bits of dialogue.

"You think doing this to me will make the world a better place?", a calm but slowly dying Betty asks Elizabeth.
"I'm sorry, but it will." is the reply
Betty isn't buying it.  She quietly tells her assassin,  "That's what evil people tell themselves when they do evil things."