Ronald Reagan, in my view, is one of the Greatest Presidents in History.  I admit to being prejudiced on the subject, given I am a Child of the 1980s and grew up with President Reagan.  He is a shadow over The Americans, given that he saw the defeat of the Soviet Union as not just a political but a moral crusade.  March 8, 1983 is the day on which President Reagan gave what has come to be known as "The Evil Empire" speech.  As the world of the Jennings is coming down all around them, to hear the leader of their enemy refer to their country and cause as evil has an impact on all of the Jennings and their circle, whether they know it or not.  March 8, 1983 is not just the season finale to The Americans, but it is a tumultuous day for the family, as so many things start emerging that could end up exploding all around them in ways none of them can foresee.

We do have to go a bit back, to when Elizabeth Jennings (Keri Russell) along with her daughter Paige (Holly Taylor) manage to get tickets to West Berlin,  Ostensibly a perk of being a travel agent, this is really a secret trip to see Elizabeth's mother, who is dying.  Gabriel (Frank Langella) is livid about this, but in the end he gives in. While in Germany, Elizabeth is on alert for anyone suspicious of them.  They do get to see Elizabeth's mother, smuggled in as she is in the last stages of cancer I believe.  Grandmamma knows about Paige, but this is not the happy reunion her granddaughter expected.  Instead, she's slightly traumatized: worried that Elizabeth could leave her like she left her mother, she prays for them both.

Philip (Matthew Rhys) meanwhile, has one particular young man in mind while plotting the newest mission with the Afghans with Yousaf (Rahul Khanna).  As part of their efforts to throw the FBI investigation off track regarding the bug, Philip kills Gene (Luke Robertson), the tech guy.  He frames it as a suicide to suggest that it was him who planted the bug, but Philip's conscience is getting at him.  He sees all the toys in Gene's apartment, and it brings to mind his son Henry (Keidrich Sellati), who has become obsessed with electronic toys.  Despite his excellent work, Philip is basically a broken man.

Stan Beeman (Noah Emmerich) gets the proof that Zenaida (Svetlana Efremova) is a double agent, but Agent Gaad (Richard Thomas) is livid that he created this operation with Oleg Burov (Costa Ronin) AND did it without authorization.  (There's a lot of livid higher-ups, aren't there?).  Gaad is convinced Beeman is finished, but an unexpected source of rescue comes from the assistant attorney general, who encourages Beeman to keep up his relationship with Burov.  However, Beeman's goal of rescuing Nina failed, as she will not be traded for Zenaida.

In the end, we see Philip and Elizabeth in their room as a news report details Ronald Reagan's speech to the National Evangelical Association.  As Paige is on the phone, revealing to Pastor Tim that her parents are Russian spies, Elizabeth becomes quietly enraged at Reagan, while Philip, defeated, is blubbering on, not caring about what the President has to say. 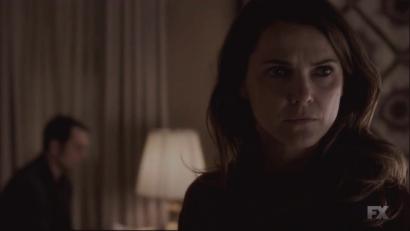 There really is nothing more to say other than The Americans is one of if not the best-acted television series so far.  I can't find a bad performance from any of the cast in this episode.  Certainly the trio of Russell, Rhys, and Taylor all score grand slams.

The scene with three generations as they reunite is so tender and heartbreaking and beautiful.
Philip's regret about killing Gene, down to when he types the 'suicide note'.  "I had no choice.  I'm sorry," is what he writes as Gene, but I think he was writing that about himself.  His quest for peace through EST, which he now finds a source of release and comfort.  Paige's fears about being left.  Elizabeth's quiet rage at Reagan.

On the whole though, March 8, 1983 isn't perfect. We get only the slightest glimpse of the storyline with Nina and Anton, and Martha has disappeared, both of which I find curious choices.  However, that does make Season Four a more fascinating affair.  That, and the idea that Paige has revealed the biggest family secret.

She should have gone Catholic: at least priests can't reveal what they learn in confession...