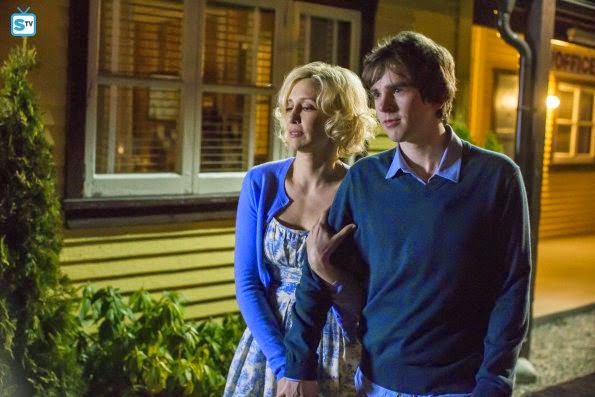 It's too easy to name a Bates Motel episode Crazy.  Pretty much everyone on the town is bonkers in one way or another.  About the only one who isn't is Dylan (and he's the criminal of the family, or rather, the criminal who hasn't murdered someone).  Crazy already has a negative, and that's Bradley Martin's return.  OK, so Bates Motel wanted to give us some sort of shock.

You gave us your shock.  Now do something unshocking about it.

Norman Bates (Freddie Highmore), shocked, perhaps thrilled to see Bradley (Nicola Peltz) again, agrees to shelter her in an empty hotel room.  She is disappointed to see how the world, particularly her family, has moved on after everyone thinks she's dead.  She is tempting him to leave with her, but he still feels the pull of Mother Bates, culminating in an inability to have sex with Bradley when he sees visions of the puritanical Mother Bates chiding him for letting that temptress come his way.  Whether he leaves or not is still up in the air.

Meanwhile, Norma Bates (Vera Farmiga) is still dealing with Bob Paris (Kevin Rahm), the most dangerous man she's dealt with (and that's saying a lot).  Finally admitting defeat, she agrees to get the flashdrive to Paris.  Only one hitch: Sheriff Alex Romero (Nestor Carbonell) refuses to give it to her.  In fact, he's handed it over to the DEA, despite the suspicions of Special Agent Liz Babbitt (Anika Noni Rose), who thinks Romero couldn't be that ignorant of all the corruption in town.  In a rage she breaks into his home, where that unspoken desire between them comes dangerously close to exploding but which still doesn't.

Chick (Ryan Hurst) for his part gets whooped by Caleb (Kenny Johnson), enraged that his son had been set up.  If it hadn't been for the fact that Caleb had insisted on going and had hidden a gun, Dylan (Max Thieriot) would have been killed.  He gets the money promised but knows he has to leave town.  Caleb has one more call to make, on his sister.  He is now the second person to tell Norma that Norman is quite ill mentally.  He recounts the events of Season Two's Check-Out, when Norman confronted Caleb, accusing him of "raping her".  It was clear that Norman thought he was Norma, and now Caleb has told his sister what their son Dylan told Norma earlier:  Norman Bates thought he was his mother.

There is this undercurrent of terrible tragedy in Bates Motel, of a woman who loves deeply but not too well.  She has been beaten up, repeatedly, and tries to play at their own game, but can't find it to work.  And that's of the things she knows about (for she knows nothing of Dylan's near-death experience, which honestly would have shattered her).    I think this is what makes Vera Farmiga's performance as Norma Bates so brilliant: she isn't afraid to make her into a selfish woman (her inability to let her younger son go a case in point), but she also is someone who really wants to do good.

I also think that some of the pairings give the actors some really good work.  Johnson and Farmiga are excellent as demented siblings Caleb and Norma, with both of them coming to terms with the twisted legacy of the family and of the taint that is infecting the next generation.  We also see Olivia Cooke's scenes with Thieriot are so wonderfully played.  Thieriot has a hesitancy with Cooke's Emma, as if afraid of approaching someone who is genuinely good (and about the only person not involved in any shady business which White Pine Bay wallows in).

The scenes with Carbonell and Farmiga are passionate and intense, Romero and Norma's suppressed desires for each other teetering on total eruption.  She at the very last minute pulls back, but these two seem destined to throw themselves into fits of ecstasy that cannot be denied forever.  Those were perhaps the most intense moments in Crazy.

That I don't think can be said for Peltz and Highmore as Bradley and Norman.  Perhaps it's me, but it does look like the Bradley subplot is A&E's oddest version of The Returned, the show that follows Bates Motel.  Here you have a character thought dead come back to life.  OK, we know she wasn't dead in the first place, but why bring her back?  I suppose I'm suppose to feel sorry for her when she walks into her old room and sees it's been turned into a gym rather than a shrine.

However, given I really didn't care for her, I wouldn't be mourning her long either.

Highmore, however, does have a great moment when Norma confronts him about having killed his father when in a panic she is getting rid of all the taxidermy he so loves.  "How do I know that YOU didn't kill Father?!" he yells, leaving her momentarily stunned.  Oh, snap!  You go, Normie!

I think Bradley brings it down a bit, as well as the side trip to crazy Mac Powell from Third Day's hopefully final appearance (never cared for Chick, and come to think of it I'm not that big a fan of Third Day either...Mac, get a damn haircut).  Apart from that though, Bates Motel still has enough to make me wonder how all this crazy will end.