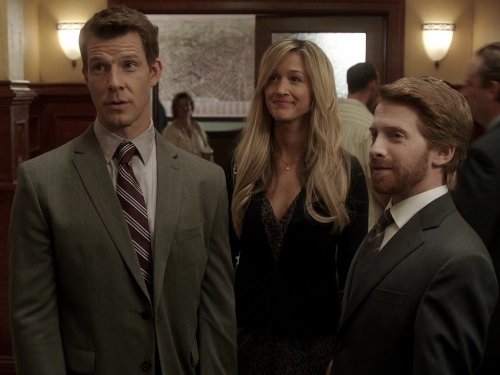 Jango & Rossi, the third episode from Season Two of Franklin & Bash, bumped up the sagging series.  It has the signature Franklin & Bash hijinks of odd cases, odd clients, and courtroom tricks to get the win.  However, it's not our fun-loving duo who are using these tricks.  Instead, it's a pair of lawyers we're being told are their doppelgangers.  However, minus the fact that one is really short and the other is really attractive, Jango and Rossi don't come off as low-rent versions of Franklin and Bash.  In fact, despite its best efforts, Jango & Rossi are almost irrelevant to Jango & Rossi.

At first, Jerod Franklin (Breckin Meyer) and Peter Bash (Mark-Paul Gosselaar) have a typically odd case courtesy of Pindar Singh (Kumail Nanjiani): Jim (Jack Kehler) has been caught on camera holding up a pizza joint which in the past has bought his cheese, and this video has gone viral.  Our boys are reluctant to take on this case, even after Jim presents them with an old coupon from their free-wheeling days and Pindar all but begs them to.  Fortunately, their Sue Sylvester, fellow attorney Damien Karp (Reed Diamond) offers an exchange.  Therefore, Karp now will defend the cheesemaker and Franklin & Bash will take Karp's case.

That involves Stanton Infeld's second/fourth ex-wife Evanthia (Cybill Shepherd)...they married twice.  She has 'rescued' a dog with whom she has grown fond of.  It soon becomes clear that she basically stole her pup from Carrie Dutton (Katie Walder), though the former Mrs. Infeld she insists it was a form of rescue operation.  The owner of our pup has hired her own pair of attorneys: one Mr. Jango (Seth Green) and one Mr. Rossi (Eric Mabius), who on the surface appear to be versions of Franklin & Bash but who are still scrappy underdogs versus the slightly more posh Jerod and Peter.

Now we have our two cases: Karp and Pindar (TOGETHER AGAIN!) defend our cheesemaker, and at first it looks like he can get away with probation given that his gun was made out of cheese.  However, the pizza joint owner, Lucky Louie (Jon Polito) is going for prison against our feeble Jim.  Meanwhile, the case of the dog pits Jango & Rossi against Franklin & Bash.  Jango and Rossi (besides technically being in the right since Evanthia took the dog from Carrie) pull some Franklin & Bash-type stunts (such as 'accidentally' releasing the dog who runs to Carrie), and are held in contempt (which prompts Franklin to say, "But I didn't do...oh, sorry, force of habit").  Franklin & Bash (who also have the law on their hand being that possession is nine-tenths of the law) are starting to feel stymied.

Well, the resolutions present themselves remarkably well: with Karp & Singh, the realization that Jim wasn't the brains of the operation and that the video has gone viral (providing publicity) proves key.  With Franklin & Bash, we get a surprise witness: one Andre Carson (Rick Fox, formerly of the NBA) who basically bails our boys out from their almost intractible situation.  While Stanton Infeld himself (Malcolm McDowell) still harbors feelings for his ex, nothing doing.  Jango & Rossi then ends with something we haven't seen for a long time: our boys Franklin & Bash enjoying some repartee at the diner which they used to frequent, deciding they after all, haven't sold out but are still the rebels with a cause.

All things being fair, I opted to do what Jango & Rossi did: do a superficial and cursory comparison between our leads and guest stars.  Seth Green: 38, 5'4".  Breckin Meyer: 38, 5'5".  Eric Mabius: 42, 5'10".  Mark-Paul Gosselaar: 38, 6'.  Co-creator Kevin Falls and Franklin himself, Breckin Meyer, co-wrote Jango & Rossi, and truth be told the story is far and away the best one of a series that, like the lead characters, have somewhat lost their way.  That doesn't make it good, just better than what's come before.

The best moments involved the interplay between the hyper-traumatised Pindar and the hyper-arrogant Damien.  The interplay between Nanjiani and Diamond is gold (and Pindar's outfit for court seemed like a nice nod to Doctor Who with his bow tie).   It also gives us a chance to see that Karp is by no means stupid or even uncaring.  He does care, not just about winning, but he does try to have his client's best interest at heart.  Karp, unlike Pindar, appears to enjoy Jim's cheese, and Karp does realize that Jim is a weak-willed man manipulated to a foolish action.

Personally, I think Pindar and Damian would make for a great spin-off, seeing how this completely odd couple do manage to work so splendidly.  Singh & Karp, anyone?

However, just like in Doctor Who, we have a quick solution to our problems that doesn't come from anything they do, but something that comes up to save them.  Just like The Doctor has his sonic screwdriver, Franklin & Bash has the Fox character acting as a deus ex machina.  They didn't have to prove that Evanthia was the dog's owner (which she clearly wasn't).  Instead, someone else came in to prove that neither of them was the dog's owner.

To me, that appears to be cheating.  What Franklin & Bash does best when it does it is have our hip lawyers think of a way out of their situation, usually via some rather outrageous courtroom stunt that proves their case.  In Jango & Rossi, we didn't have that.  Instead, Fox came in and basically solved their problems for them.

That, my friends, is the very embodiment of a Deus Ex Machina: something or someone coming in to solve the problem almost as if by magic.

The more I think on it the more I keep thinking that Falls and Meyer lost a golden opportunity for character growth (no, that isn't a Meyer or Green joke).  I thought it might have been fascinating to have switched the cases again.  I wonder what would have happened if KARP had taken the dog case and Franklin & Bash taken the cheese case.

Think on it: what would be Damien's worst nightmare?  Going up against Franklin & Bash in court.  What would be worse for him than to have to find himself defending an ex-aunt he doesn't particularly care about, with a highly neurotic second chair, and facing an even worse version of his hated rivals?  What if to beat Jango & Rossi, he had to do what he would hate the most: turn INTO Franklin & Bash?  All that would have driven him insane, and perhaps allowed Karp to see that his adversaries weren't as stupid as he thinks.

Meanwhile, by giving our heroes the cheese case, we could have them pull their own stunts, whatever they might be.

However, this WASN'T the point of Jango & Rossi.  The point was to have Franklin & Bash come up against those who are similar to them, and there was simply no way that Jerod and Peter were going to lose.  Perhaps that is why I found Jango & Rossi to be a slight disappointment: they had no legal way out of their predicament, so something else had to come along to bail them out.

Wouldn't it have been interesting to see Jango & Rossi actually WIN the case, at least at first?  Perhaps something could have been done at the last minute to show that Franklin & Bash were actually highly competent lawyers...when they wanted to be.  That wasn't what we got: what we got was an easy way out to secure yet another victory.

As a digression, this is the third case where something comes up that allows Jerod and Peter to get out of something.  First, a client's sudden change of heart allowed them to escape dealing with a difficult situation.  Next, a fortuitous twist got the fanboys to get their client off a murder charge despite finding it easier to let said client accept that he wasn't living in reality.  Now, Rick Fox comes to take the dog.

Curiously, for supposedly being the low-end versions of Franklin & Bash, we never saw much from Jango and Rossi to justify a comparison.  The main victim of this short-changing (no pun intended) was Mabius, who was mostly relegated to being the silent (and taller) partner.  Most of the good moments were between buddies Green and Meyer, with Gosselaar jumping in every so often.  Green and Meyer worked well together, one gives them that, but because they spent most of their time dueling with each other there really wasn't room for anyone else (I swear I'm not aiming for short jokes).

This is particularly sad for Mabius' part because he is one of the better actors around: a man who can play villain (The O.C.) and comic (Ugly Betty) with equal grace and believability.  By opting to make this a showcase for Green and Meyer, Gosselaar and especially Mabius lost out.

Of course, that ISN'T to say there weren't things about Jango & Rossi.  Shepherd had surprisingly tender moments with McDowell (especially at the end) along with her goofy oblivious ex, and he in turn sharpened his comic bits with typically bizarre statements about a woman's "K Spot" (which in his addled mind, trumps the G-Spot").  When Lucky Louie's testimony is going south he snipes at Franklin, "Watch it, Atticus," which is a clever line.   There was also a borderline-Tarantino repartee between Franklin and Bash about a VILF, a Villain I'd Like to...I think Peter picked Cruella DeVil.

That I admit was clever.  Other things, well..

One thing that did take me by total surprise was when the Fantastic Four were in the judge's chambers.  To their surprise, Franklin & Bash lost the argument, and they begin taking shots at Jango & Rossi (though truth be told, it was the Napoleon Complex-afflicted Jango and Franklin who did most of the backbiting).  Franklin mocked the fact that Jango had cats, "You LOOK like a cat," to which Jango replied, "Meow, mother..." before the screen went black.

I rewound that three times to be sure I had seen what I had seen.  Falls and Meyer skated dangerously close to being censored, and I imagine they would have thought themselves witty, but I think it would have been far cleverer to have had a little Shaft reference:

Jango: Meow, mother...
Bash: Shut your mouth.
Rossi: But we're talking about Maxie (the dog's name).
Franklin & Bash (in unison): We can dig it.

Jango & Rossi was a step in the right direction.  However, it's unfortunate that the episode's title characters were only superficially similar to the show's title characters.  If one hadn't been short and the other good-looking, Jango and Rossi wouldn't have been close to the Franklin and Bash doppelgangers Falls and Meyer were trying to pass them off as.  I liked the interplay between Diamond and Nanjiani (of which I hope there will be more of in the future).   I might have raised the score for Jango & Rossi based on the performances, but that damn deus ex machina...

Next Episode: For Those About to Rock
Posted by Rick at 9:05 PM