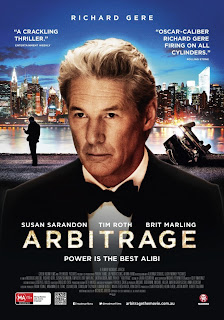 The evil businessman is not new.  Therefore, knowing that Arbitrage involved an evil businessman (since there really are no other types of businessmen) I started it thinking it was going to be about shady dealings.  In a sense, I was right: there is greed and corruption galore.  What did take me by surprise was that the story takes twists and turns that I wasn't expecting, leading me to imagine our main character was more lucky than smart.  Arbitrage is a well-structured film in where it leads us, even though it takes us where we expect to end up in due to it taking different routes than we expected.

Robert Miller (Richard Gere), our evil businessman, has just turned 60.  He has a still-hot wife, Ellen (Susan Sarandon), a bright and loyal daughter who works for him, Brooke (Brit Marling), and unbeknown to both, a requisite mistress, French artist Julie (Laetitia Casta).  Robert, despite all appearances, is close to financial ruin.  He's taken $400 million (more or less) loan to cover up a loss that has yet to be recovered, and now the lender wants his money back.  The lender is threatening to pull out his money, just as Miller is thisclose to selling his company and thus avoiding both financial ruin and discovery of his duplicity.

As any man with a high-strung mistress knows, you have to keep them happy.  After arriving late for a showing due to work issues, Robert whisks Julie off to a cabin somewhere outside New York City.  At least that is the plan, which goes wildly wrong.  He nods off, causing a crash that instantly kills her and leaves him visibly injured.  As he leaves the scene of the accident, the car explodes.  Now he gets in contact with his former driver's son, Jimmy (Nate Parker), who drives all the way from Harlem to pick up and drop off our villain.

The accident is being investigated by Detective Michael Bryer (Tim Roth), who soon zeroes in on Miller as being the actual driver.  Bryer is not fond of the One Percent, convinced they always get away with anything.

So far, so traditional in our story.  However, soon Arbitrage starts taking turns we don't quite expect: doctored evidence, lucky escapes and even witting collaborators help Robert Miller escape both prosecution for murder and for fraud.  Arbitrage ends with Miller receiving an award with his wife angered that his actions have put their daughter at risk professionally (though she presents a price for her silence), and Brooke icily awarding her corrupt father and no-longer hero.

It's the twists that save Arbitrage from being a cliched "Evil Businessman Gets Away With It All" story.  We start getting our first step towards a different style of story when we get a conflicting story.  Jimmy insists that he didn't take the toll road, but there is a photo of his licence plates going through the toll.  Therefore, which is the truth, and how do we have these discrepancies?

It is the moral choices the characters must make (Jimmy, Brooke, certainly Robert, and even Bryer and Ellen) that is the real mystery in Arbitrage.  Each of them has compromised themselves in some way, all of which leads to terrible consequences or choices.

Writer/director Nicholas Jarecki shows great promise in crafting a story that doesn't overwhelm you.  Instead, Arbitrage allows you to see the characters either try to get out of situations or come to terms with them.  At the heart of all the moral and financial corruption is Gere.  His RObert Miller is a man who fights to maintain his calm as situations he can't control start swamping him.

Gere allows Miller to have a few moments of moral questioning.  Perhaps Miller has some morality (at times he comes close to turning himself in) but by and large he looks to get out of things.  His scene with Mayfield (Graydon Carter), the man who is on the verge of buying his company, is one of calm, even chutzpah, while all the time knowing he has no cards to play except his own bluster.  It's a cool and calm performance.

In his few scenes, Roth reminds us how good an actor he is.  I did wonder whether he was trying too hard to be a Nuw Yawker in boht speech and manner, but I give him an A for going all in.  I also thought well of Marling as the conflicted daughter.  Her determination to sort out the mystery of hte missing millions is done with a confidence of someone who is used to fixing things.

One thing that I was wildly impressed with was Cliff Martinez's score.  By now I can say that I am a Martinez fan (having loved his work in Contagion and Drive) and in Arbitrage, he goes for the same minimalist style that he has perfected.  Martinez is rising as a film scorer, and I hope to hear more of his work in other feature films.

Arbitrage is a well-crafted film on how someone can, by a combination of luck and planning, some of his work, some from others, get away with if not murder at least the killing of someone who loved him.  Will he eventually get caught?  It doesn't look like it, with Arbitrage ending on a note of uncertainty.  It is up to us to figure out whether Robert Miller will eventually pay for his crimes, legal and moral.