Now I have to start with a statement of truth: I never saw Knocked Up (not even in the almost daily rotation it gets on the E! Channel...wonder why it plays so often there?).  This is why I don't know how well it measures up as a follow-up to that film, taking two secondary characters and basing a film around them.  In a sense, This Is 40 sounds like what on television would be called a 'spin-off': take characters that appeared in one show and build a new show around them.  That is an accurate description of This Is 40: a bad sitcom pilot with only more self-centeredness and more vulgarity that would make HBO blush.

We encounter our Knocked Up couple of Pete (Paul Rudd) and Debbie (Leslie Mann) as both approach their 40th birthdays.  Well, Pete is turning 40, Debbie is still debating whether to turn her actual age of 40 or continue being 38.  Since their birthdays fall on the same week, we get to see them go through their lives in this most tumultuous seven days.

Pete is henpecked to within an inch of his life.  He can't have his cupcakes.  He hides his finances from Debbie, neither telling her of how his independent record company is losing money or how despite denials he still keeps giving his father Larry (Albert Brooks) money despite Larry having a new wife and toddler triplets of his own (making pre-schoolers the uncles to a teenager).  Pete is also not thought of highly by his two employees, Ronnie (Chris O'Dowd) and Cat (Lena Dunham...whom I'm told is a genius but never having seen Girls I cannot vouch for that.  Actually, I once had a nightmare where a group of women forced me to watch Girls when I wanted to watch football, but I digress).

Debbie has her own problems.  First, she keeps denying she is forty unless she is forced to, then someone is stealing from her store: either the hot salesgirls Desi (Megan Fox) or the more frumpy Jodi (Charlyne Yi).  Furthermore, she seems incapable of handling negative comments about her older daughter Sadie (Maude Apatow) online.  Debbie actually goes and confronts the sort-of cyberbully Joseph (Ryan Lee) and curses him out.  Let's remember this is a 40-year-old woman threatening to run a teen over with her car (and making him cry in the process).  Add to that her generally soft bullying and belittling of Pete, her strained relationship with her own father Oliver (John Lithgow) who ALSO has a teenage son of his own, and the big surprise that she is preggers herself.

Sadie is a Lost-obsessed perpetually shouty bitch while her little sister Charlotte (Iris Apatow) is a bit annoying.

Finally, despite all the problems these two face, Debbie and Pete somehow remain married, perhaps not in love but highly comfortable with each other. 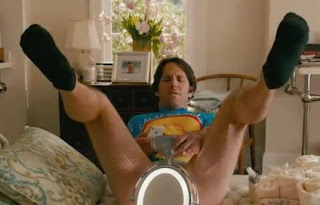 This Is 40 veers wildly between forced comedy and excessively serious drama, and neither worked.  Again and again I kept thinking this played like a sitcom, a particularly bad one where everyone appears to think they are being clever and funny when they really are sad.  Sad, sad, sad.  In the course of a week, we get Pete and Debbie come across not as people who we care about but as people we'd run away from.  They never trust each other (he hides his finances, she her pregnancy) even though it is obvious that both will be revealed.  Their reactions and actions to various things, such as Pete's inability to see what he has up his ass (thus requiring him to get all twisted up) or Debbie's verbal abuse and threats to a minor make them look insane.

Moreover, when Jason's mother Catherine (Melissa McCarthy) confronts an unsuspecting Pete, somehow Catherine's behavior is even more irrational, allowing our two rather hateful people to get away with threatening to kill a child.

Everything in This Is 40 is so forced, everyone behaving as if they know this is 'funny' when it ain't.   It's not just what they say but in their delivery, as if we have to have a beat between lines so as to allow the laughter to subside.  This isn't to say I didn't actually laugh in This Is 40: there were two scenes where I did laugh.  One was a montage of Pete and Debbie getting a battery of medical exams, and the other when an either drugged or insane Jodi is confronted with her being the thief.

However, let's remember that for a comedy, that is only two times I laughed.  Most of the time, I kept wondering when their long nightmare of a film would be over.  Debbie's pregnancy news and her inability to tell Pete sounds like they stole that subplot from The Simpsons when Marge upsets Homer's life by getting pregnant with Maggie.

Again and again the 'humor' in This Is 40 is in humiliating or putting Pete and Debbie in embarrassing situations (case in point: when an obviously high couple puts a resort bellboy in an uncomfortable position by running around sticking things in their underwear).  You look at the people that Pete and Debbie surround themselves with, from their family to their co-workers, and you wonder how any of them function.

As good as O'Dowd is (and I suppose that genius Dunham as well), their scenes with Rudd again always look forced, as if they ARE in a sitcom trying to push the envelope but getting nothing from keeping their barely concealed contempt for their boss at the center of the comedy. There is really nothing funny in how This Is 40 goes out of its way to emasculate Pete or in his stupidity or deceit.  When he flees his Mary Richards-esque birthday party he ends up crashing into a door on his bike.

First, this isn't set up to be funny.  It looks painful.  Funny is if he were riding with confidence and joy.  Painful is when Pete's already suffering some kind of emotional malaise.  Then, the driver of the car does something irrational: he ends up punching Pete.  A natural reaction would be to see if the person who just crashed into their door is alive and all right.  Instead, the driver becomes hostile and angry, cursing out the person on the ground.

And OH the cursing.  One might have thought Quentin Tarantino had written the screenplay rather than Judd Apatow because of all the F-This and F-That, even coming from Sadie (who is there only because Daddums put her in there, not for any actual acting talent...a bit like Jaden and Willow Smith).  Both Apatow Girls were terrible in the film: Maude is every cliched angry teenage girl (and frankly a bit of a bitch towards everyone).  Maude Apatow's reaction to being told there will be limits to her computer usage is to shout and flail all about (her method of acting is to scream and swing her arms like a propeller) and this seemed again like a sitcom not real life.

Certainly from my own experience with teens, most are actually good and respectful kids.  Why then celebrate boorish behavior like that of Sadie?

Curiously, the best performance in This Is 40 is from Megan Fox, who is able to spoof her own persona of 'the hot girl' and showed an unexpected flair for comedy, at least if it comes at her expense.  At least to her credit she is able to laugh at herself (something that not even the highly-regarded Mann was able to do).

This Is 40 thinks it's funny (and there are some moments of laughter, and not forgetting Green Day's Billy Joe Armstrong's cameo was amusing as well) but just like weak Pete's fixation on Graham Parker, This Is 40 is out of touch with what makes a good comedy: characters we care about.

This Is 40 is the River Song of Comedies: when you give a secondary character the starring role, you end up with a disaster.