Elementary: One Way to Get Off Review ELEMENTARY: ONE WAY TO GET OFF

One Way to Get Off is perhaps the weakest Elementary episode so far.  It's not that the mystery involved is bad (although to be fair, one that I solved pretty quickly).  It certainly isn't that the dual investigations (Holmes of the murder cases, Watson of Holmes' past) don't work.  It isn't even the slightly distasteful aspects of the crime (though I wasn't too keen on them).  I would say that while One Way to Get Off had many pluses in regards to the characters and their own stories, the mystery itself was almost forgotten and despite the gruesome nature of it, basically unimportant.

I should also note that I had technical difficulties while watching One Way to Get Off (the picture and sound sometimes disappeared), so that will affect my review.  However, I do have that in the back of my mind so I will cut the episode some slack with regards to it.

We first come across a brutal home invasion, which leads to the killing of two people.  Meanwhile,
Sherlock Holmes (Jonny Lee Miller) is still upset over the mentioning of Irene, this mysterious woman from his past, by the not-mysterious woman from his present, his Sober Companion Dr. Joan Watson (Lucy Liu). Holmes is not amused to see his past, in particular, The Woman, brought back to his life.  Still, despite this we do have a mystery to solve...

The shocking crime is similar to that from Gregson's past.  In fact, solving it was what brought Gregson to becoming Captain.  Now we are faced with a dilemma: either there is a copycat, or the man arrested for the crimes is really innocent.  Gregson is understandably angry at the suggestion that he got the wrong man, and even angrier that Holmes intimates that perhaps Gregson might have willingly/wittingly set up Wade Crewes (Keith Szarabajka).

Holmes continues to avoid Watson at every turn (even making the music from the shower scene in Psycho his cell phone ringtone for her).  He simply won't deal with her or with the mention of The Woman, so now they basically split up.  Watson goes to Holmes' rehab center, where she appears to get nowhere with anyone knowing about any Irene.  That is, until she notices the gardener, who has a fondness for bees...

Meanwhile, Holmes and Gregson continue trying to find a connection between the past crimes and the new ones.  Perhaps Crewes' dismissed alibi, one Carla Figueroa, can provide new information.  Alas, Mrs. Figueroa, who had been Crewes' lover, has passed away a few years back.  This was told to them by her son, Sean Figueroa (Juan Castano).  Another suspect has the strangest alibi: he was with his Russian sex slave at the time.

There are things in this business that no one likes.  Holmes is put off by how Crewes, who went into prison as an illiterate, can now quote Tolstoy and Wilde with the greatest of ease.  Gregson is upset to find that his former partner Terri D'Amico (Callie Thorne) did manage to basically plant some evidence against Crewes (although Gregson did not know, though perhaps suspected such things, and the confession helped).  Watson does not like having Holmes continuously rebuff all inquiries about The Woman and cannot bring herself to open the letters Watson got from the gardener, all from Irene ADLER.

Eventually, one last suspect (whom Holmes and Watson find and who has the actual murder weapon) is dismissed because the last crime got a bit sloppy and the eyes don't match.  In fact, it's the eyes that give the whole game away.  How does a son of two Mexican parents end up with blue eyes?  It helps that said person volunteers at a prison library.  Well, with that mystery solved, Gregson's reputation preserved, Holmes finally opens up, slightly, about Irene Adler, claiming she is dead.

Or is she?  With Holmes, one never knows whether he is telling the truth about such matters.  In fact, I don't believe Irene Adler is no longer among the living (as my science teacher would say).  If anything, I think we will see our vixen make a physical appearance.  I personally hope she remains an American actress as she was in A Scandal in Bohemia, but we'll see.

In regards to Christopher Silber's screenplay, I think the biggest flaw is that the actual mystery isn't all that mysterious.  It should be clear who the killer is (I figured it out almost as soon as he appeared).  Once that came into the picture, everything else then became a waiting game. 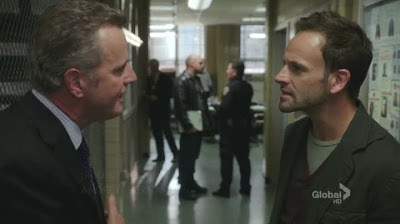 That isn't to say that One Way to Get Off was all bad.  This episode was more about the characters: Holmes' hesitancy to reveal more about himself, Watson's ability to use her growing detective skills, Gregson's fight to save his integrity, Holmes & Gregson's struggle over whether there was any deception.  THOSE were the aspects we paid attention to.  The actual crime was almost secondary.

Perhaps part of my reluctance to embrace One Way to Get Off involves the crimes themselves, which I felt were rather gruesome.  The addition of a Russian sex slave almost seemed to put a stopper on how seedy One Way to Get Off was.

What the episode does better is in keeping the balance between the dual investigations.  This is a rare time when Watson and Holmes aren't working in tandem.  In fact, it's almost a dual mystery: Holmes and the murders, Watson and Holmes.  I thought giving Watson a growing ability to solve parts of his story showcased both her growing abilities and a chance for Liu to in a sense strike out on her own.

I also thought the Gregson story was expertly handled.  Quinn made Gregson an honest cop, and Holmes' intimations that perhaps he wasn't as straight as Gregson presented himself allows Quinn a chance to show growing anger at his frenemy (at least for this one episode).

If there is one thing I would ask of both director Seith Mann and creator Robert Doherty is to drop the quick showing of clues we are not privy to (especially in that green light).  However, One Way to Get Off does have some genuinely amusing bits, in particular the Psycho moment interrupting Gregson's meeting with his special squad of investigators.  It not only punctures a tense moment with chuckles, but also shows that at that moment Holmes has nothing but contempt for Watson (why else have Psycho playing when she's calling?).

The actual crime in One Way to Get Off I felt was a hiccup to what is turning out to be a fantastic opening season to a wonderful series.   When it comes to the first season of Elementary, it's becoming clear that the biggest mystery is Sherlock Holmes himself.

Next story: The Long Fuse
Posted by Rick at 1:30 PM