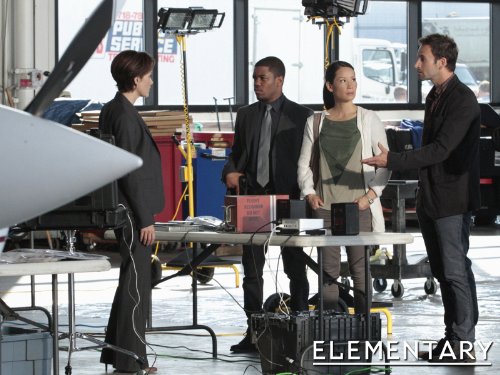 Sherlock Your Safety Belts While The Lights Remain On

In Flight Risk, Elementary's sixth episode of its premiere season, Dr. Joan Watson (Lucy Liu) asks a remarkably mundane yet insightful question.  We learn that Sherlock Holmes (Jonny Lee Miller) is afraid of flying via his over-enthusiasm bordering on mania (even for him) in a case that involves a crash.  Watson asks if he's so afraid of flying how did he get from London to New York.  Holmes doesn't answer, and I think that reflects the subplot of Flight Risk: Holmes' inability or unwillingness to answer anything about himself.  That a master detective like Sherlock Holmes wishes to keep everything involving him a mystery is ironic.  That in the end a major factor of his life is discovered by an ever-growing in deduction Watson adds to both the series and its future.

Holmes appears bored.  He also doesn't believe that his as-yet-to-be-seen father is actually going to come to see him and Watson for dinner.  Watson still believes Mr. Holmes, Sr. (since we've yet to learn Daddy Holmes' first name) will come despite Sherlock's protests to the contrary.  However, something has caught Holmes' attention: a plane crash on the beach, especially since his friend/connection Captain Gregson (Aidan Quinn) is there too.  While at the small aircraft crash site, Holmes makes some curious deductions: one, the sand there is different from the one from the rest of the beach, and two, one of the crash victims was already dead before they hit the ground.  In other words, murder (or to quote from Agatha Christie, one of Arthur Conan Doyle's few rivals in popularity, Death in the Air).

At first the idea is that one of the passengers must have done it, but then the investigation shows they weren't aware his body was even on board.  Then it's suspected that the crash occurred because the body in the cargo hold affected the weight of the craft, and with the turbulence or an on-board fight the shifting weight forced it down.  It's also thought that the victims, all lawyers, were killed over a lawsuit involving a toxic food product.  That angle is investigated and we find its a dead end.

Which brings us to the sand.  Holmes can't keep wondering about why the sand at the crash site is different from that of the rest of the beach.  It then comes to him: there was intentional sabotage of the plane by loading up the tank with sand.  In other words, that plane was going to crash no matter who or what was on board.  The questions now are: who killed the passenger and why.

While Holmes keeps batting away at this crime, aided more by Detective Bell  (Jon Michael Hill), Watson continues on her dinner date with Mr. Holmes, Sr.  At first he appears to be a rational, intelligent, even elegant man, telling Watson stories of Holmes' early days, including an old injury he suffered as a child.  It isn't until Mr. Holmes, Sr. asks about the sex between Watson and Sherlock that she realizes she's been set up.  "Mr. Holmes, Sr." turns out to be an actor friend of Holmes', and Watson is not thrilled shes been made a fool out of.

Holmes happily continues his investigation, now turned to the pilots.  He confronts one, wondering why there was always a 66 pound difference in weight on all flights from New York to Miami and back.  The reason is clear: 66 pounds equals 30 kilos, and that's 30 kilos of cocaine.  At first, the pilot denies these charges, but then this pilot turns up dead, the murder weapon from the first crime found there.  He apparently has killed himself, leaving a shocked airline company head in shock.  However, the owner appears rather nervous.  Watson realizes it's because he is ill, not nervous (accounting for the large amounts of water he's been guzzling).  She also realizes something about Holmes from her memories of when she and the faux-Holmes met. 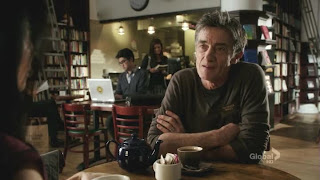 She tracks down Alistair (Roger Reese) in a logical way: the receipt she saw when she first bumped into the faux-Holmes had a twenty percent discount, signaling he was an employee. She also confirms that Holmes did have an injury which only an intimate would have been aware of.If he'd been just some random actor he wouldn't have bothered with such intimate details.  Alistair tells her he knew Holmes from London, serving as his drama coach.  He also saw him at his very worst, when the addiction overwhelmed him.  Alistair then whispers a name to her, as being at the heart of Holmes' issues.

Now we find that the airline president not only knew of the smuggling but was the brains of the operation.  The original plan was to kill off the other pilot, who discovered this and wanted no part of it, by making it look like an accident.  The murder victim had unfortunately stumbled on him when he was filling the tank with sand, so he was forced to kill him.  Since the plane was going to go down anyway, everyone would figure he had been killed in the crash.

The case is solved, but Watson now confronts Holmes with the name, She Who Must Not Be Spoken Of, The Woman named Irene...

I won't lie: while I didn't exactly do a "Happy Dance" at the mention of Irene (or at least admit to it), I was thrilled that a name from the Holmes mythology that I long suspected had been at the center of Holmes' addiction did come to pass.   It's a curious thing about our Irene: she appeared in only one story (A Scandal In Bohemia), but she has become now a strong part of the Holmes story.  Whole books have been written with her as a lead, sometimes married to Sherlock, sometimes on her own. The Guy Ritchie Sherlock Holmes films make her out to be Holmes' femme fatale, and A Scandal in Belgravia (the Sherlock update of the story) has her as this dominatrix who can bewitch Holmes.

This American actress has captured the imagination of Holmesians and casual readers to where she is seen as part of a larger story, in the same way Professor James Moriarty has impacted the popular idea of Sherlock Holmes.  Like Adler, he was in only one story, but now they are seen as intertwined in an epic tale.

Irene, or as Holmes would always refer to her, The Woman, is now going to play a major part in Elementary.  Whether it is just as a shadow or actually making an appearance in the flesh (interpret that however you like) is yet to be seen, but Flight Risk pays homage to the Canon, which we haven't seen much of in some other Elementary stories.

Corrine Brinkerhoff's screenplay has many twists and turns, which is both good and bad.  On the one hand, perhaps being led in so many directions (the lawyer was the target, the whole gaggle of lawyers is the target, the pilot is the target) is what all good mysteries do.  On the other hand, it can be frustrating when the roads you're led not only don't lead anywhere, they prove irrelevant to the story. It's in the emotional and character aspects of Flight Risk that the story soars (pun intended).  Watson is now shown as being fully capable of playing detective herself (coming up with the identity of Alistair from putting the things placed before her--though not strictly us--together).  We also see that Irene casts a strong shadow over Holmes which he is either unable or unwilling to deal with (an out-of-sight, out-of-mind idea that might not be panning out for him).   Flight Risk is a story where we do have a good, solid (albeit cluttered) mystery, but one which also starts developing aspects of The Canon into Elementary that will have repercussions in the future.  David Platt leads his cast to say so much without making grand announcements, particularly whenever Miller's Holmes has to confront the less-positive aspects of his personality.

As a side note, this episode seems to be more Bell-oriented than Gregson-oriented.  I don't know whether it's to build up Hill's part or because Quinn has already had brilliant moments with Miller in other episodes, but I did find that curious.

One thing I didn't care for was the sudden and inexplicable loss of the opening titles.  Instead, we just get Elementary on the screen.  I for one hope this was just a one-off flub, seeing that the opening titles give Elementary a bit of class and elegance, and a touch of mystery.  I'd hate for them to do that again.

In a curious turn I think Reese would have been great as Mr. Holmes, Sr., but he also shows a strong performance as Holmes' 'friend'/drama coach.  One does wonder whether he will return to Elementary, and I'm glad the door is being left open for Reese to do so.  I enjoyed both interplays between Reese and Liu: comic in the first, dramatic in the second.  It shows both can play light and serious with equal grace and ability.

Finally, I think it is wise to keep allowing Watson's medical abilities to show Holmes the right direction.  It was she that noticed the whistleblower at the food company was diabetic when Holmes took longer to figure that out, and it was she, not Holmes, who realized the excessive water drinking was connected to the pilot's killing, not nerves.  I hope her character continues to grow.

Still, minus the loss of the titles and the false leads we're led on, Flight Risk continues to make Elementary work both as a procedural and an expansion of the Sherlock Holmes myth as transplanted to present-day New York.

Next Story: One Way to Get Off