Despite the drama that airline stories provide, flying is still a more reliable and safer mode of travel than all others.  However, we can't have great dramas surrounding a mass group of people being driven by an alcoholic and addict like you can with Flight.  You certainly couldn't have the drama and tension of an airplane desperately trying to avoid crashing.  Flight isn't really the story of one brave man avoiding near disaster due to his intelligence and self-control.  Quite the opposite: Flight is the story of a weak man who has little to no self-control, bringing misery to himself and everyone around him.  Minus one or two implausibilities Flight is a character study of a man long in denial who through a series of destructive circumstances is forced to admit to himself what everyone around him already knows: through excessive use of alcohol and drugs he is a danger to himself and others.

Whip Whitaker (Denzel Washington) has an ex-wife and a career as an airline pilot.  He also has a highly undisciplined life: he boozes, snorts cocaine and is fooling around with a stewardess, Katerina Marquez (Nadine Velasquez).  It's suppose to be a routine flight from Miami to Atlanta, not a long flight.  His co-pilot Ken Evans (Brian Geraghty) is still new and Whip's more casual manner worries him.  Still, Whip is a professional who knows his job.  Evans, however, as well as stewardess Margaret (Tamara Tunie), a woman of faith, also know or suspect that Whip is under the influence.  While in flight, Whip has more to drink, surreptitiously, at the same time that the turbulence prevented the drinks tray from being rolled out to the passengers.

Then during the flight, the weather and the plane itself unleash chaos aboard the plane.  Whip is the only one that can take control of a situation spinning (literally and metaphorically) out of control.  The plane, not near enough to the airport, makes an emergency crash landing in a field by a church.  Whip does survive, albeit with injuries, but six people out of the 102 passengers and crew are killed.  Among them, Katerina, whom whip last saw saving a child who had fallen out of their seat.

As Whip is held up as a hero, he slowly starts recovering from his physical injuries. At first he tries quitting cold turkey but then soon falls spectacularly off the wagon.  He also meets Nicole (Kellie Rielly), a heroin addict we've met earlier as we cut between Whip's story and her own.  Fortuitous encounters bring them together, and they soon start an affair fueled by booze and drugs.

However, the investigation into the crash reveals that Whip had a high content of alcohol and cocaine in his system.  The pilot union's attorney Hugh Lang (Don Cheadle) soon starts working to get Whip off from taking blame for the crash and the deaths, a difficult task given Whip's self-destructive ways.  Nicole eventually starts putting her own life together with a steady job and AA meetings, but Whip still insists that he has no problem.  Still, his conscious troubles him, especially when Evans emerges from his medically-induced coma and Whip learns from Evans that his dream of being a pilot is gone because Evans will never walk again.

Eventually a hearing will be held to find the cause of the accident.  All appears to be going well: Whip finally starts sobering up and the blood tests were removed via a technicality.  However, despite all their best efforts on the actual day of his testimony Whip is hammered big-time. A little coke, provided by "friend" Harling Mays (John Goodman) puts him together enough to be coherent, but at the end, even after mechanical failure was found to be A cause, will he smear the memory of Katerina to save himself? 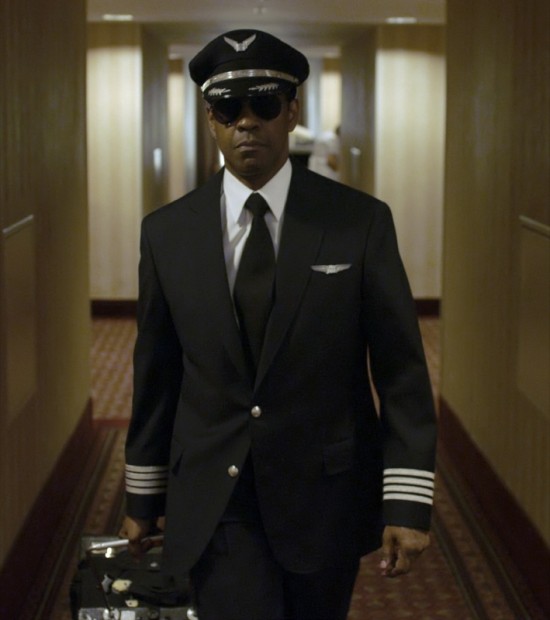 Flight is misrepresented in ads as this action-film about the heroics of Whitaker and the questioning of said heroics.  It really is the portrait of a neither a hero or a villain but of a highly flawed, even  frightened man.  Robert Zemekis has taken a break from his quixotic efforts to make computer generated figures lifelike (which have resulted at times in almost frightening-looking things) and directed his first live-action feature in over a decade.  Surprisingly, he brings a great deal of humanity into Flight, where the plane crash is just the beginning to one man's life spinning out of control.

In fact, while I doubt John Gatins' screenplay was intended to be symbolic, Flight works on two levels.  You have the actual story of the crash and its aftermath.  On the other, you have the metaphorical crash and fall of Whip, someone whose swagger hides a total lack of control.  Whip, like the airplane, takes off but simply can't come down without the damage already there.

Flight rests almost entirely on Denzel Washington, who turns in a simply brilliant performance.  At turns both infuriating and crushing, Whip is someone who is highly flawed but who also appears to be a good man.  Washington never makes Whip either someone to be scorned or someone to look up to.  When he takes control of the faltering plane, his command and steady thinking makes one admire him, yet whenever we see him drink and drive he infuriates us.  That balance between the man who kept a calm head at his job but cannot be honest with himself at work is the dichotomy that Washington keeps in steady balance.

Washington, Zemekis, and Gatins never allow us an easy way of categorizing Whitaker.  He isn't heroic in how he treats Nicole or dismisses almost everyone who tries to help him personally or professionally.  However, in those few moments when he is faced with Katerina's smiling face, deciding between saving himself and destroying her reputation, the agony is heartbreaking.

In regards to other aspects of Flight while the screenplay worked well when it came to our very flawed protagonists, at times certain situations and people were a touch far-fetched.  When Whip meets Evans his wife keeps bursting out "Praise Jesus" in a clearly cartoonish "all people who believe in Jesus are insane" style.  Certain incidents, in particular when the adjoining hotel room door, with a suite filled with liquor, happened to be conveniently unlocked, seemed more like a plot device than something that would really have happened.

Side note: I do wonder if having With A Little Help From My Friends playing in the elevator as Whitaker and company descend after he took a large amount of cocaine to revive him (provided by Mays with Lang's silent acquiescence) seemed like a bad joke than anything else.

Also, the coming together of Nicole's story with Whip's seemed at times forced and something that appeared a bit cliched: two addicts coming together.

However, on the whole Flight is less about the plane crash (that when shown on what is suppose to be a home/cell video is surprisingly sharp and steady) than it is about Whitaker's own crash.  Denzel Washington gives a brilliant performance of an addict who is forced, slowly, painfully, to see that what he dismisses has terrible ramifications for himself and others.  We both care for him and want to kill him.  Flight doesn't try to make Whip Whitaker a hero but again, he's not a villain either.

It's in that duality that Flight excels in, less about the plane and more about the man.