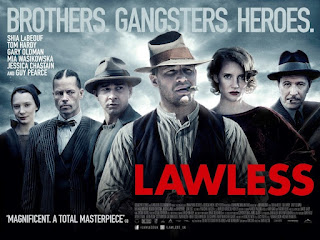 If I were asked about Lawless, I'd say that the film is long, bloody, and boring.  That is simply a terrible combination that takes Lawless from what it wants so desperately to be (a fun gangster-meets-hillbilly picture) and instead makes it into a slow, lumbering 'character' piece where you frankly don't care whether any of our heroes make it out alive because you wouldn't want to be around them.

Lawless is 'based on a true story', that of the Bondurant boys: Howard (Jason Clarke), Forrest (Tom Hardy) and little Jack (Shia LaBeouf).  In Jack's voice-over (how I wish we had a moratorium on voice-overs), we're told that the Bondurants are seen by their mountain neighbors as immortal, that nothing can kill the Bondurant boys.  Being the Depression it isn't surprising that the Bondurants are bootleggers and moonshiners.  Their home, Franklin County, Virginia, is known as the Wettest County in the World thanks to all the illegal alcohol activity going on in their neck of the woods.

Things are basically going well in their enterprise, until Special Deputy Rakes (Guy Pierce) comes to town.  He's not there to enforce the law; he's there to get his cut.  The Bondurants don't cotten to nobody, so he starts putting the squeeze on them.  Among his acts are to have Forrest's throat slashed.  Of course, he doesn't know that the Bondurants can't be killed.

From there, Jack becomes more involved in the business, including making up his own moonshine with his little buddy Cricket (Dane DeHaan).  Eventually, Rakes and the Bondurants have a final confrontation after Rakes uses the law to not only take out the Bondurant's mill but poor Cricket as well.

Oh yes, we also get two women involved in all this: the beautiful Maggie Beauford (Jessica Chastain) who is attracted to the taciturn Forrest, and preacher's daughter Bertha (Mia Wasikowska) who appears to be a member of a sect whom Jack has taken a moonshine to.

Lawless somehow has a great subject matter but so many things damn it to be a sluggish film.   Most of Lawless' problems come from John Hillcoat's painfully slow pacing.  Things amble on in a glacial manner, and while that already causes problems, Hillcoat opts to keep all our characters at a distance.

We don't know anything about Forrest, except that he talks slow (giving Hardy a chance to show how 'actory' he can be).  Even after having his throat slashed (and more on that later) he really doesn't seem all that emotional.  There is taciturn, and then there is Forrest Bondurant's near-zombie like way.  Other than the fact that it's big, muscular Tom Hardy, one is puzzled what Margaret sees in him that would attract her sexually to him, let alone be in love with him.

Same goes for Clarke, the forgotten Brother Bondurant.  Since he isn't the star (that would be LaBeouf and Hardy) he has the least to do in anything.  As for Shia, at least he is still trying to be this serious actor but Jack comes off as nothing more than whiny, the little brother trying to show he was a big shot.

Pierce dove into a hammy performance with gusto, playing up the cartoonish Rakes with gusto.  The two women, Chastain and Wasikowska, are among my favorite actresses (I all but worship the latter) but they seemed almost an afterthought, like suggesting there had to be a couple of girls to suggest the Bondurants weren't sexless.

Turning to the violence in Lawless, I was aghast at how graphic it turned out to be.  Forrest's throat slashing was particularly grotesque and frankly it was off-putting to me. I'm not opposed to violence on screen, but when it cant find a subtle way to express something rather horrifying then I take issue with it.

In short, what was worse about Lawless was just how BORING it all was.  One doesn't care about the Bondurants and their 'legend of immortality'.  One doesn't care about their actions (though in fairness, DeHaan's Cricket is the only one you care about: a credit to his performance that he could stand out more than the stars).  One can't get excited about the people in Lawless, even if the style of the film tries to compensate for how dull the leads are.