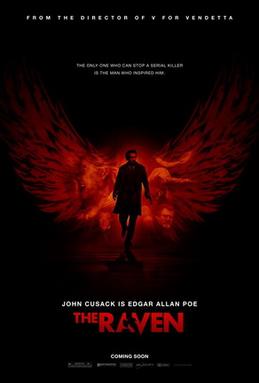 Once Upon A Film So Dreary...

I love the works of Edgar Allan Poe.  I even love the Vincent Price films based (loosely) on Poe's writings.  The Tell-Tale Heart, The Raven, The Pit and the Pendulum, The Masque of the Red Death: Poe was the original Master of the Macabre.  The Raven is a highly fictionalized film involving Edgar Allan Poe: part mystery, part horror story, all mess.  I say 'involving' deliberately, because frankly the major part missing from this Edgar Allan Poe-based film is...Edgar Allan Poe himself.

Baltimore, 1849.  Our poet Edgar (John Cusack) can't get a drink, even after they know who he is (he's a bit like the literary Lindsay Lohan).  Unbeknown to him, a series of murders are taking place, all based on his works.  At first, Detective Fields (Luke Evans) suspects Poe of being the murderer, but then accepts that the killer is merely ripping Poe's works for his more-and-more elaborate crimes.  With that, Fields gets Poe to help him track down the killer.

The serial killer gets more outrageous and elaborate.  At a 'conviniently-taking-place-by-chance ball that could match The Masque of the Red Death given by Poe's fiancee's father' (Brendan Gleeson), the killer strikes, and spirits away Poe's true love Emily (Alice Eve).  Now the killer is keeping Emily alive while he matches wits with our writer.  Poe and Fields come across clues, crimes, and corpses until the actual killer is unmasked.  I'd give it away, but frankly The Raven never gives us a chance to find out who the killer is so his identity appears rather random, but I digress.

Our killer has managed to poison Poe while announcing his admiration for the author, telling Poe that the killer now has found a new favorite author, one Jules Verne. (At this point I kept wondering what our killer would do: try to send Verne into space).  The poison kills Poe, but not before he gives a cryptic clue, with a quick scene of Fields in Paris, taking care of our killer.

As I said, Ben Livingston and Hannah Shakespeare (no relation to William) have a script that would make for an interesting film, if they had bothered to include the central character in the story itself.  The Raven might have worked if A.) it were set in present-day (certainly there is a vague Seven influence in our feature), B.) it had made Fields, not Poe, the central character, and/or C.) if it had not taken place near Poe's final days.

That of course is me being generous.  The Raven is full of atmosphere if nothing else, with its dark cinematography (courtesy of Danny Ruhlmann) and Gothic sets.  However, atmosphere only goes so far.  Everything else in The Raven is either convoluted or ridiculous.  We're used to gruesome and elaborate murders, but sometimes the stories from which the killings are inspired by are a bit opaque that perhaps a Poe scholar or one who has read EVERY story would know.  The closest analogy I could find is if a serial killer were using Shakespeare and he selected King John or Henry VIII.   In this case, perhaps sticking to the more well-known Poe works would have served to help the audience figure out what is going on.

The revelation of the killer is patently unfair.  One thing that a mystery cannot have is a minor character that we've come across once or twice turn out to be the killer.  This isn't a sign of cleverness, it's a cheat.  One can't solve a mystery when the actual killer barely registers.

If that isn't enough to sink The Raven, our lead is not someone who plays well with others.  As portrayed by Cusack, Edgar Allan Poe is egoistic and almost insane.  Yes, the real Poe may have been egoistic and almost insane, but Cusack behaves as though he had been asked to parrot Nicolas Cage's more outlandish roles.  Shouting to a group of bar patrons that they should know who he is by quoting lines from The Raven is not convincing.  It makes him look unhinged, hardly the person one would look to at helping track down a killer.

Even worse is Eve's performance as Emily, who comes across as bland, even a bit vapid.  She has a blank expression on her face throughout The Raven, looking confused as to what exactly she is suppose to be doing in the film.

Of all the performances, only Evans appears close to interesting.  Again and again I kept wondering why he wasn't the central character, namely because he seemed to be the only one who appeared to be taking any of it seriously.  Evans' performance might have made for a compelling film if he had been the central character (a man smart enough to figure out the method in the madness).  However, he was short-changed by both the script and director James McTeigue's slavish devotion to the look of The Raven as opposed to the performances within The Raven.

The Raven looks to copy other, better films (say, Shakespeare in Love, Naked Lunch, Il Postino or Capote/Infamous) where a literary or historic figure becomes part of a fictional/fictionalized story.  Sadly, one imagines that The Raven might have been better if it had bothered to include Edgar Allan Poe within its story.   It be far too easy to quoth the raven, nevermind.  Let's just say The Raven is a horror film but all the wrong reasons.