Franklin & Bash: For Those About To Rock Review

FRANKLIN & BASH:
FOR THOSE ABOUT TO ROCK

That might have been a good title for For Those About to Rock, our fourth Franklin & Bash episode of the sophomore season.  Another title might have been I Never Sang For My Father, given the importance of the pater familias in the story.  While For Those About to Rock starts going back to what made Franklin & Bash such a fun and clever show (juvenile antics mixed with intelligent legal maneuverings), the actual resolution to the case again proves mindbogglingly easy, almost insultingly so.

As punishment for doing something that irritates a judge, Jared Franklin (Breckin Meyer) (and can I digress to say how often I've misspelled Jared as Jarod, Jered, Jerod and other variations) has been sentenced to community service.  What IS this community service?  It's to serve as a small claims court judge of course!  As is typical of Franklin, he takes NONE of this seriously.  He takes the various cases as jokes and gets carried away with the small amount of power he has to say and do as he pleases with no one to argue with him.

That is, until he meets Dennis Mazzani (Joel David Moore), owner of an eponymous club that's a cross between CBGB's and The Whisky A Go-Go.  He's fallen behind on his rent and the new owner wants him out, unlike the previous owner who would let him slide for a month or two so long as he managed to get all the money later.  At first Franklin wants to postpone things, but the prosecutor forces his hands, and Franklin has no choice but to rule for the plaintiff.

As it happens, Mazzani has a very silent partner in Mazzani's, his Brian Wilson-esque recluse of a father.  The theme of fathers and sons is interwoven in For Those About to Rock, since the plaintiff's lawyer is none other than Leonard Franklin (Beau Bridges), Jared's very estranged father, against whom Peter is highly antagonistic.  The feeling appears to be mutual, but now I'm jumping ahead.

Peter Bash (Mark-Paul Gosselaar), a giant rock n' roll fan, is highly upset his friend ordered that Mazanni's close.  Franklin isn't thrilled to see himself, the coolest guy he knows, referred to as the judge that killed rock n' roll.  With that, Franklin & Bash approach Dennis to help him keep the club open, even if it means having to contact Dennis' own estranged (and just strange) father: the technicality being that since both have their name on the lease, the developer was in the wrong because only Dennis was contacted.

The second case is a rarity indeed.  Pindar Singh (Kumail Nanjiani) has been slowly coming around from his various neuroses thanks to Stanton Infeld's life coach, Dr. Lee (Tom Wilson).  Just as Pindar is about to go to another session, Pindar's lady-friend/fellow neurotic Megan (Megan Stevenson) gives him shocking news: Dr. Lee has been arrested for fraud. In a rare turn, Infeld himself (Malcolm McDowell) will handle this case, aided by Hanna (Garcelle Beauvais)...and Pindar himself.

The Mazzani case is proving harder, given how reclusive Bert Mazzani is (somehow the idea of serving a subpoena never occurs to anyone).  Peter wants to win this case to justify his own sense of rock 'n roll wisdom, perhaps to find out who the "Belinda" in Bert's cult classic Belinda's Town is.  While there are suggestions that Richard Kohl (Richard Portnow) has been working to undermine the club so as to take it, nothing solid.  As their frustrations grow (Peter's inability to win, Jerod's inability to deal with his father), Peter unleashes his anger, but then comes upon a major piece of evidence that solves their problem.  Mostly.

We still have to get Bert Mazzani to testify, no easy task.

As for the Dr. Lee case, Pindar, as highly neurotic as ever, is angry at being hoodwinked, even angrier when the case reveals that Dr. Lee has been schtupping his female patients.  One guess as to what lady was among them...However, Hanna and Infeld put Pindar himself on the stand (much to his horror), where he must admit that despite being a charlatan, Dr. Lee has helped Pindy.  Alas, they do lose the case, but Infeld suggests that he put Pindar through all this so as to help him take a step towards recovery.

The Mazzani case has that big twist: the identity of Belinda along with Kohl's relationship with Belinda and Mazzani is revealed, first via a benefit vinyl album photo and then with the testimony of Bert himself (Peter Weller), which includes mumbling a few lines of Belinda's Town, which the judge admits as testimony.  While the boys win the case, Leonard Franklin still gets his revenge: Kohl now will open his mall a few blocks away from Leonard's son's home.  As Jerod keeps speaking his barely concealed anger, Leonard walks away, waving to his son by opening and closing his hand behind his back. 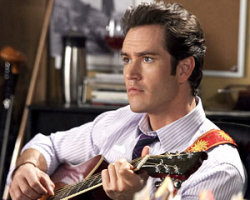 The big thing in co-creator Bill Chais' script that bothered me to no end is that the resolution to the Mazzani case is so idiotic.  We're led to think that the 'Belinda' in Belinda's Town is this great mystery, somewhere between who the Leyla that Eric Clapton sang about and the narcissist in Carly Simon's You're So Vain.  However, when Peter and Jared take a look at the benefit album, we see Bert holding a woman named Belinda Schwartz, and nearby is a young Richard Kohl.

Here's what I'm asking: didn't anyone else own said album?  If they did, wouldn't they have speculated that the 'Belinda' in Belinda's Town could be...a woman the singer/songwriter named Belinda?  It would have been more believable if Belinda Carlyle had been the subject of the song (and a chance to see her again...how I miss her).  Also, the connection between Kohl and Mazzani should have been something that Leonard should have known, otherwise he is a poor or deceived attorney.  The Hollies were more subtle with Carrie Anne, merely changing a letter to hide that the song was about Marianne Faithfull.  If indeed Belinda Schwartz IS the Belinda in Belinda's Town, I'm sorry but that's not much of a mystery.

It's painfully obvious that this 'epic' mystery could have been solved in less than a day (and I suspect I'm being generous), so the building up of Belinda's Town to this unfathomable rock legend is just insulting to the audience.

As for the second case, I couldn't help think of the horrendous Michael Douglas film The Game (which inexplicably received a Criterion Collection release...one of the dumbest films I've seen).  The plot of The Game was that the Douglas character was put through some sort of elaborate joke where he was pushed to the edge of sanity and which apparently every person on Earth was in on merely for his own betterment.  Similarly, Dr. Lee's trial was merely a way for Pindy to come to terms with his own hyper-fears.  Never mind that Infeld lost his case, or that Dr. Lee will be going to prison, or that Megan was screwed/screwing Dr. Lee (thus putting the already unstable Pindar in a bind).  No, it's all good, because Pindar has come through this traumatic experience with flying colors.

Given how neurotic Pindar is, I'm surprised he took Megan back so quickly, but then again given he probably doesn't get much chance for a little bit of nookie he isn't going to let a little thing like infidelity get in the way.

It isn't that For Those About to Rock again, doesn't have good things in it.  There are the usual clever lines; when Dennis complains how the music industry is today when to book the Chili Peppers they had to take N*Sync, Peter replies, "Second album was good, before Timberlake got a big head".  Portnow's evil businessman (is there really any other kind) at least was given some motivation for his seething desire to bring Mazzani's down (although I would have thought that perhaps genuine tragedy, such as the loss of a son via a drug overdose at the club, might have made for a stronger motivation...and not having him in the picture would have helped tremendously to bring more pathos to the situation.  Then again, this is suppose to be a comedy).  The animosity between Franklin pere et fils still has that great tension and near-mutual loathing, thanks to the interplay between Meyer and Bridges.

However, I found more to question and dislike that admire about For Those About to Rock.  I questioned why Infeld and Hanna, highly experienced attorneys, would allow a witness like Pindar on the stand without knowing what he would say (something I understood no lawyer would dare do).  I questioned whether Infeld had Dr. Lee's best interest at heart when he figured his case was more for Pindy's benefit than Dr. Lee's.

In terms of acting (particularly between guest star Bridges and regular Nanjiani) For Those About to Rock proved a great showcase.  For nearly everyone else (especially Meyer's Franklin, who came off more as a silly little man incapable of taking anything except his hatred for his father seriously than a brilliant lawyer...please, a little restraint por favor), we are not ready to rock.

Next Episode: L'Affaire De La Couer
Posted by Rick at 9:13 AM