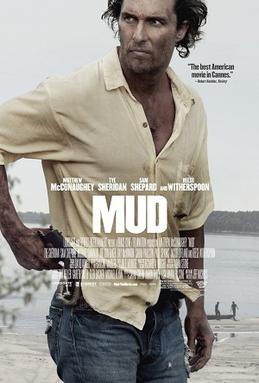 Mud made me think that certain elements of Great Expectations in that the youth help a fugitive and how adults use children for their own selfish ends.  What I found at the end of Mud was that it was a strong tale of human frailty and corruption, if one that was a.) a bit too long and b.) a little overt in its symbolism and parallel between adults and children.

Two boys in semi-rural Arkansas, Ellis (Tye Sheridan), and Neckbone (Jacob Lofland) live by the river, Ellis making a living from the fish he sells with and for his father Senior (Ray McKinnon).  There is family tension: Senior and Mary Lee (Sarah Paulson), Ellis' mother, are in the middle of a struggle over the family's future.  This is going on under the radar for Ellis.  Neckbone, who lives with his Uncle Galen (Michael Shannon), a sex addict, gets Ellis to see a strange sight.  Going downriver, they encounter a boat caught up in the trees.  They decide they will make this their own, until they realize someone is actually living there.

They find this strange character, who calls himself Mud (Matthew McConaughey).  He says he comes from their hometown, and that he is waiting on a woman (to quote a song).  In exchange for food, Mud will give them rights to the boat (and his gun, at Neckbone's insistence).  Mud soon gives up more information: the woman he is waiting for is one he killed for, defending her against a man who knocked her up and was abusing her.  That woman, the boys find, is indeed nearby.  She is Juniper (Reese Witherspoon),  However, she too is being followed, by the vengeful King Carver (Joe Don Baker), the father of the murdered man, who brings his other son and bounty hunters to find Mud.  Ellis has fallen in love with an older high school student, but this is short-lived, with his temper flaring at the rejection.

Eventually, the boys find that Juniper may not be the best woman for Mud, and even Mud's mentor, Tom (Sam Shepard), who lives across the river from Ellis' family, can persuade Mud from trying to get back to her.  Ellis and Neckbone steal parts to help Mud put the boat back together, but Senior discovers his son's thievery.  A hurt Ellis accuses Mud of manipulating them both to get away, and in his anger falls into a pit with poisonous snakes.  Mud risks everything to save Ellis, but this alerts King.  Mud wants to see Ellis is all right, so he gets Neckbone to guide him to Ellis' riverboat home.  King and his mercenaries are waiting for him, and a battle ensues.  Tom uses his talents as a sharpshooter to help Mud, and while Ellis, who now no longer lives by the river, does not know if Mud survived, we find that he did, Tom helping him escape down the Mississippi.

I think the problem I had with Mud, if I can call it a problem, is how writer/director Jeff Nichols is a bit heavy-handed with the symbolism and parallels he is trying to showcase.  There is a lot of 'snake' within Mud, but figurative and literal. There are snake tattoos, snakes in the river, people being 'snakes' to others.  There is also how Ellis' love life is mirroring Mud's, with the woman who does not share his enthusiasm for the man.

Still, like I said, these are not impediments to me seeing Mud as a strong film, where we see good performances from the cast all around.  Of particular note are the boys.  Sheridan in particular as Ellis shows that with good parts and steady direction he has a strong future in film.  He makes the admiration and disillusionment of Ellis believable and natural.  Lofland and Neckbone also shines, though he is a supporting character to Ellis.  Mud, despite the title, is really Ellis' story from boy to man, understanding the duplicitous and dark nature of the adults.

Speaking of adults, it is incredible to find that somewhere buried in the bare chest and drawl there is an actual actor in McConaughey.  For too long he's been letting his lackadaisical manner and swagger get in the way, and here he makes it possible to believe that someone like Mud could charm the kids into taking his side, while keeping something of a child's belief in the purity of the love for Juniper true.  Witherspoon also does some of her best work as Juniper, who is a good girl gone bad or maybe a bad girl who keeps hoodwinking Mud to be her protector because she knows he always will (even when it is not warranted).  I was also impressed by McKinnon, an actor who really should work more.

Mud has a lot of stories to tell, particularly with Ellis: his family, his girl, Mud, but while the story buckles at times by all that it does not break.  As I said, sometimes the symbolism and parallel lives of Mud and Ellis are laid on a little thick, but on the whole Mud does a fine job of detailing how sometimes the ones we love and/or admire are not worthy of such things, and that it takes more than a gun to be a man.