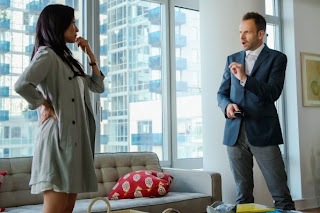 Blood Is Thicker keeps a pretty strong balance between the mystery and the interpersonal entanglements of the characters.  We also get a wonderful ending that leaves us wondering where Elementary Season Two will end up.

Sherlock Holmes (Jonny Lee Miller) and his brother Mycroft (Rhys Ifans) appear to be building rapport with each other after years of estrangement.  Things are going so well for the Holmes Brothers that Mycroft suggests that Sherlock might want to return to London, permanently.  Sherlock is momentarily flummoxed by all this.  In another part of town, a delivery man is driving around with a corpse on top of his truck, unaware that a dead woman is literally being taken for a ride.  Joan Watson (Lucy Liu) and Sherlock now come to investigate this bizarre crime.

We find that the victim is Hailey Tyler (Kersti Bryan), the illegitimate daughter of Ian Gale (William Sadler), an inventor and high-tech tycoon.  This Steve Jobs-like figure has more in common with the late Apple founder than just that: Ian also happens to be dying.  While this information is top-secret (knowledge would plunge company stock) that instantly removes him from a suspect.  We then move on to two other suspects, Ian's wife Natalie (Margaret Colin) whose prior medical knowledge gives her a leg-up in how Hailey was killed, and Hailey's violent boyfriend Ray (Kieran Campion).

In the end we discover that Hailey was in no condition to help her biological father in his health issues.  Far from it: she was ill to two weeks prior to her murder, so with some fake lab work we find that maybe it isn't Hailey's murder they should be investigating.  Maybe it's Gale's.  Once we find who the actual victim is, we find the killer of father AND daughter.  We also find that Sherlock and Joan decline Mycroft's request to return to London.  At Mycroft's Diogenes Restaurant, he calls a mysterious number, telling the person on the other end that he couldn't persuade Sherlock to return, and that they will have to find another way to get him to come back.

Oh, there it is: that big tease, that little nugget of future stories where we are left to wonder what is going to happen and how it will all play out.  Blood is Thicker ends with a big tease, and what a tease it is.  We are left with so many questions about what Mycroft is up to, whether this 'let's be friends' business was a shameless rouse, or again, is there something more, something deeper.  Ifans plays it all so beautifully: the sincerity of Mycroft's motives to rebuild a relationship with Sherlock, the mysterious nature of his motives to bring his little bro back to London.  I don't think Mycroft's motives can be thoroughly guessed at now.  We can guess that there is something nefarious behind this duplicitous act of Mycroft.  However, can we say that for certain?

This is the great thing about Ifans' performance: so much can be read within it without giving anything away.  It truly allows us to take guesses, to figure where this tantalizing story is going but Ifans and Mycroft won't tell us anything.  In many ways, it is Ifans who is the showcase in Blood is Thicker.  He is proving to be an excellent Mycroft, shadowy figure in the Holmes Family.

I liked the fact that Liu's Joan Watson is showing her skills in detecting.  She is the one who thinks that maybe the crime in question is not the crime presented.  It is also good to see that it is her medical knowledge that leads her to put things together.  So often in Canon adaptations Watson's medical background and experience is either underused or not used at all, for Watson is too often made the bumbling nitwit/stooge (NO thank you, Nigel Bruce).  Here, I'm glad that her expertise is what lead to solving the crime(s).  Miller still does well as the difficult Holmes, but to his credit he does allow moments of humanity to creep in.  Would he really go back to London?  The fact that he appears to have some détente with Mycroft shows that despite himself, there is a beating heart within Sherlock.  Whether he wants to admit it or not is another thing entirely.

In terms of the crime, there were good twists and turns, though the parallel between Gale and Jobs is a bit too much to imagine that Bob Goodman's screenplay didn't draw inspiration from Jobs' life (a dying tech genius with an illegitimate child unknown to the world).  We do, however, get good ways of getting clues, along with some clever quips.  The way Sherlock finds where Ray may be is due to the DVR programming.  "Televisions are idiot boxes.  DVRs are idiot helpers.  We are the idiots," he states.  After Ray is arrested, he remarks at the station that his horse finally, literally, comes in, and they arrest him.

I found that on the whole Blood is Thicker has some great moments of humor and a truly fascinating cliffhanger that HAS to pay off big-time or it will be disastrous.  So far I have high hopes for this plot thread: it worked well with Moriarty.  With a great performance from Rhys Ifans, I think Blood is Thicker keeps us wondering about when the other shoe will drop...and thus, makes us want to watch to see what happens in the future.

For full disclosure, I have Elementary set on my DVR.  Read into that what you will.

Next Episode: On the Line