No Bodies At Holmes...

Ancient History has some good twists and turns within it, and a subplot that allows for more odd comedy to seep through.  I don't mean offbeat, I mean odd.  While the actual case ends up a bit of a letdown for me, the subplot has in it more recognition that the two main characters can have some fun at each other's expenses.

A man is found dead on the side of the road, victim of a motorcycle accident.  For once, this was the actual cause of death, but Sherlock Holmes (Jonny Lee Miller) suspects that the victim had done a little murder prior to his unfortunate end.

This case of trying to find who the dead man killed is to Sherlock more important than the case poor Joan Watson (Lucy Liu) takes up.  Her friend Jennifer (Danielle Nicolet) asks Joan to help her find this guy with whom she had a one-night stand.  His name is Tony, a photojournalist with whom she shared an incredible night of sex and whom Jennifer would like to meet again.  Holmes is pretty dismissive of Joan's case, but she presses on while helping with Holmes' search for whomever the dead man killed.

It turns out that this Leo Banin was a pseudonym, and that he was really a Polish hitman recently retired after running from the Russian Mafia and encouraged by his wife Lara (Mia Barron) to turn to the Catholic faith for absolution and a new start (since they're Polish, I'm making the conclusion they are Catholic, but have no firm proof of that, but it is a more religious-centered home to be sure).  Lara knows of his past, but she is convinced they were making a new start, putting up their life savings to start a senior health care center.  One of the people whom Leo was working with, Travis Hardwick (Wass Stevens) curiously did not either send flowers or attend the funeral, so ergo we have a potential victim.

Pity that when Holmes and Watson go to the construction site, they find a sleazy motel where Travis is very much alive, with hookers and coke to boot.  So since he's not the victim, we are forced to move on...after Holmes takes the money Travis had taken from Leo.

There is the loan shark that Leo got the money from to build the senior care center.  Moving on from Travis, we find Russell Gertz (Mike Starr), equally alive.  Holmes is very frustrated by all the living people popping up all over, but this visit is not in vain: we find that the Russian Mob is back.  The Mob's hitman appears to be a strong suspect for forcing Leo to swerve (what caused the accident, which also killed another driver), but as it turns out, THIS guy is the one who's dead.

The dead man (finally), Grigori, was seeing a psychiatrist.  While that therapist, Dr. Glassman (Tibor Feldman) is equally very much alive, he does provide a clue: the name Marko Zukov kept coming up. At last, we find Marko Zukov...alive.  Worse, he's got a great alibi: he was stabbed in the leg during a mugging, and this is verified by the police.  However, Sherlock notices something curious about the bandaging Marko's leg got the night of the stabbing.  With that, he finds who made Leo swerve and crash when the perpetrator shot at him.  This person was not a sharp-shooter, but in order to keep secret an adult film past which shocked Leo, the killer decided he had to die.

As for the Tony case, well, Sherlock admits that HE was Tony.  Early during her days as a sober companion, Sherlock had followed Joan to a bar and hooked up with Jennifer.  Making matters worse, when Joan meets with Jennifer again, she tells Joan that Sherlock had come over to apologize.  Joan is not fooled: she immediately realizes they had sex again!  When Joan comes back to the brownstone, she tells Sherlock she isn't upset.  Far from it, she is thankful that he is helping Jennifer out in her efforts to get pregnant.  For a moment, Sherlock Holmes is left stunned and silent, until he finds Joan is just playing him.  "I almost had you," Joan says, to which he agrees. 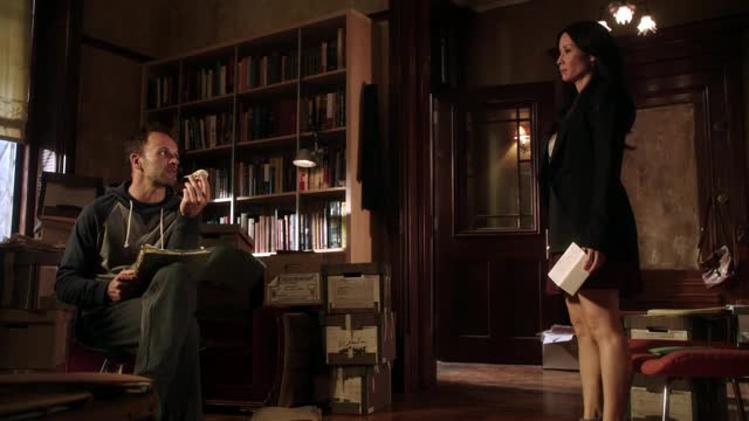 It's good to see Elementary taking more risks and grow in confidence with this tale that starts with a body but where murder wasn't the actual cause of death.  Moreover, there is a more humorous subplot that doesn't overwhelm the main story and allows for the interplay between Holmes and Watson to be on more friendly terms.  In fact, the Tony storyline was in many ways reflective of Ancient History, where the tone was lighter apart from Leo's death.

There was the aforementioned search for Tony, where Joan is the one doing most of the investigating until Sherlock pulls the rug from under her.  If it hadn't been for this twist, it would have been nice to see Joan handle a case completely on her own without Sherlock's help.  For most of Ancient History, I thought it was nice to see them split cases, and despite the revelation of Tony's true identity this storyline on the whole allows for that lightness to appear.  There is also Holmes' real frustration that no matter where he turns, everyone he expects to be dead is alive and vice-versa.

Miller handles that aspect of Sherlock quite well, where his unflappability regarding corpses keeps getting frustrated.  At the conclusion of the episode, where he looks genuinely taken aback at the prospect that he may actually be a father, Miller has a great moment where he is clearly able to be, even for a moment, the brunt of a joke.  Liu matches him in this scene, where she says this rather outrageous thing with such a straight face that it shows she has learned a few tricks from her partner.

As for the cases themselves, it is an interesting take on the investigations to see that it isn't strictly murder that was the primary case, though the resolution does seem a little disappointing.  Not terrible, just not overwhelming (the divorce angle didn't quite make sense for me given that this was all in the past: I'd put being a hitman as worse than being in pornographic films in my morality scale).  Still, seeing a rarity like a generally nice loan shark (Russell lent Leo the money in gratitude for his care of his ill mother some time earlier).

The guest stars did well.  Of particular note was Starr as Russell, who looked both insecure and genuinely pleasant.  Also, Barron captured a convincing Polish accent and while everyone apparently pinned her right away, I was taken in by her kind demeanor.  They do say it's the quiet ones you should watch out for.

On the whole, Ancient History was a pleasant romp where there was more lightness than grittiness.  It wasn't a flat-out comedy, but there was a wry humor to most of the proceedings that I enjoyed.

Next Episode: An Unnatural Arrangement