It is a strange twist in film history that biopics of two ex-spouses are released within the same year.  Then again, the late former President of South Africa Nelson Mandela and his second wife Winnie are not ordinary people.  They were and are highly important to the history of their nation and the world, though their legacies are wildly divergent.  Winnie Mandela, the first of these two films on the Mandelas, is not a dreadful film.  It is at times a bit too reverential and skims over the more controversial aspects of Mrs. Mandela's public life.  It also has some curious choices in terms of acting that frankly make it look like a made-for-television movie rather than a feature film.  However, within it there are some good things that, if just for a few better choices, might have made Winnie Mandela a more insightful feature.

The film attempts to cover virtually the whole of Nomzano Winifred Madikizela's life, beginning with her birth as the sixth daughter of one of the first black schoolteachers, who himself was the son of a chief.  Being the sixth daughter when her father wanted a son did not sit too well with him, but she perseveres, attempting to be the 'son' he wanted by taking on the boys.  Eventually, her brains take her from her remote village to the sprawling metropolis of Johannesburg, where in a total shock to me Winnie goes to school and is friends with girls of all races; in fact, I think we had a representative of all the various groups the apartheid government had (White, Black, Colored or mixed race, and Indian).   Winnie attracts the attention of both a photographer and a Black lawyer, one Nelson Mandela (Terrence Howard).  A quick courtship and marriage follow, but because of Mr. Mandela's work against the apartheid system and insistence of 'one man, one vote' where the white minority did not rule against the black majority's will, he was harassed often.  Eventually, the African National Congress' struggle for peaceful change was met with indifference, so it became an armed struggle.

Eventually, Mr. Mandela was caught, arrested, and tried for treason.  His sentence: life.  Mrs. Mandela takes up the mantle, and in turn faces harassment of her own, including a particularly grueling 18 months imprisonment, most of that in solitary where she was constantly being told not to talk, even to the ants that became her only companions.  The stress of this took their toll on her mental state, and after her release she continued to struggle with herself and against apartheid.  However, things took turns for both the better and the worse.  Sent into virtual exile, a white doctor who comes to offer her a job is basically assassinated by the whites keeping tabs on her.  Even more horrifying is the Mandela United Football Club.

Ostensibly a volunteer bodyguard group, the MUFC grew to shameless hooliganism and brutal thugs (with perhaps Mrs. Mandela's tacit support).  This group and Mrs. Mandela herself reached its lowest point with regards to how they treated opponents.  Winnie, in military garb, suggested that they would take the nation armed with 'our boxes of matches and our necklaces we shall liberate this country'.  "Necklacing", as we find out, is the horrific practice of forcing a tire around someone, then lighting said tire on fire (hence, the reference to boxes of matches).  If that wasn't already quite horrifying (and going against her still-imprisoned husband's more conciliatory methods), the MUFC believes one of their own, a fourteen year old named Stompie Seipei, was an informant.  Despite his taking refuge at a church hostel, he was dragged at gunpoint and murdered.  Winnie Mandela never quite answers exactly what the depth of Mrs. Mandela's involvement was in this shocking act.

Finally, after 27 years imprisoned, Nelson Mandela is released, with Winnie by his side.  However, despite his repeated warnings about her violent words, the MUFC, and suggestions of an affair with her MUFC main bodyguard, they now must separate.  Winnie Mandela ends with her appearance at a Truth and Reconciliation Commission hearing, and her reflections of her wedding to Nelson. 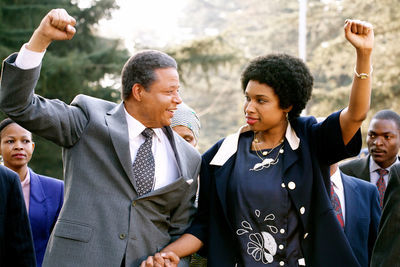 As I said, in many ways Winnie Mandela is not terrible.  One thing going for it is Howard, who does his best to create a believable Nelson Mandela, speaking with Mandela's distinctive cadence and capturing his unique voice as well as any American actor can.  I also think well of Jennifer Hudson's performance on the whole.  I am one of those people who thinks Hudson should not have won an Oscar for Dreamgirls.  Just like I didn't think Anne Hathaway should have won for singing one song, I think Hudson won for belting out And I'm Telling You I'm Not Going with all the gusto of the diva she was on American Idol.  However, with Winnie Mandela I think Hudson shows that she has grown as an actress, and I think she like Howard did the best to try to capture a South African accent (with varying degrees of success).

One thing that IS odd is how Hudson as Winnie doesn't appear to age all that much if at all, while Howard as Nelson ages considerably.  Just a thought.

A highlight (if it can be called that) is when we see the solitary confinement of Mrs. Mandela.  Hudson was excellent as this woman being psychologically tortured.  Pity that a.) the symbolism of her leading the ants (somehow, South African musician Dave Matthews' Ants Marching came to mind) and the evil (a bit comically evil) female guard stomping all over the ants while screaming at Winnie to be quiet was a bit heavy-handed.

This heavy-handedness is another aspect of Winnie Mandela that does the film in.  We see only one evil Afrikaans in their lives, DeVries (Elias Koteas).  I appreciate that this was done to keep a sense of continuity, but for the longest time I wasn't exactly sure why HE, out of all the Afrikaans in South Africa, was particularly obsessed with the Mandelas.  Even when we're suppose to think him truly evil, it can come off as unintentionally hilarious (like when he eats her wedding cake...the bastard!).  All that was left for him to do at this particular point was twirl a mustache.

Another Winnie Mandela misstep is Andre Pieterse and director Darrell Roodt's screenplay (from a biography by Anne Marie du Preez Bezdrob).  It puts elements in that are never fully explored, such as the idea that Winnie becomes the woman she did because her father wanted a strong male or how her school friends didn't appear to mind she was Black (and oddly, they disappear rather quickly).  Even worse, the screenplay does something I loath in films: after showing us her early days with her stick-fighting with boys to prove her strength, the film has Winnie TELL Nelson the same thing.

The screenplay has another problem: it is not bold enough to address the most controversial aspect of Mrs. Mandela's life (the MUFC murder).  If we go by Winnie Mandela alone, at the very least she was oblivious to how the football club went about its business.  Worse, it almost makes it look like the murder of Stompie Sensie was just a minor blip in an otherwise illustrious and noble life.   It comes dangerously close to try to whitewash Mrs. Mandela's role in this affair, down to her not saying anything definitive at the T & R Commission hearing.  Winnie Mandela dances around what her role if any was in this sordid and gruesome affair, and it also as mentioned early go a bit overboard with the symbolism.

One last aspect that was a weak decision was Lauren Eyquem's music.  It was overdone, being lush or romantic or militant, it could never do anything other than draw attention to itself.

In the end, I think Winnie Mandela certainly has its heart in the right place, and Hudson and Howard are both better than the material they were handed.  If it were not for that the film tries too hard to be laudatory and never giving us more than a skimmed view of the subject (not to mention plays coy with her rule in the Stompie Seipei affair), it would have been better.  However, Winnie Mandela is a production that appears more from television than film and that would have done better to have found its courage to be a complete portrait, not an unfinished one.