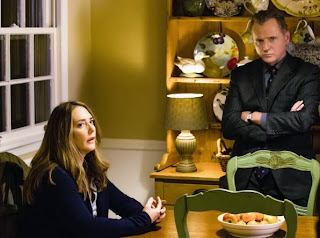 This Case Hits Too Close To Holmes...

An Unnatural Arrangement has an interesting case within it, but on the whole it is more a character study.  However, that character in this Elementary episode is NOT either Sherlock Holmes (Jonny Lee Miller) or Dr. Joan Watson (Lucy Liu).  It is instead Captain Gregson (Aidan Quinn), as well as an exploration of the concept of 'partnership'.

There is a home invasion.  A masked man is waiting for a woman, demanding to know where her husband is.  This woman, however, is no victim.  She packs heat and knows how to use it.  She immediately calls the police after shooting the intruder, and it is clear that Mrs. Cheryl Gregson (Talia Balsam) can take care of herself.  Captain Tobias/Thomas Gregson rushes to the home, where Sherlock, Joan, and Detective Marcus Bell (Jon Michael Hill) make the unfortunate discovery that the Captain and his wife have been separated for a month.

There is a witness to the assailant running off into the dark.  That is James Monroe (Ted King), like the President (5th, in case you were curious), the neighbor and former Marine.  A suspect emerges: Dustin Bishop, someone who has become obsessed with Captain Gregson.  However, this is not the actual attacker, since his blood does not match the one from the Gregson home.  This is confirmed when another man is found dead with the same weapon that was used against Mrs. Gregson.

The victim, Sam Clennon, had a stab wound unrelated to his murder.  There is a new suspect, Jacob Esparza (Armando Riesco).  Clennon's mother confirms that her son had served with Esparza and another man, one Lieutenant James Monroe, the Gregson's next-door neighbor.  Instantly everyone recognizes that the home invasion of the Gregson home was due to mistaken identity.  In short, the killer went to the wrong house.  However, by this time the killer realized that and they find Monroe dead. 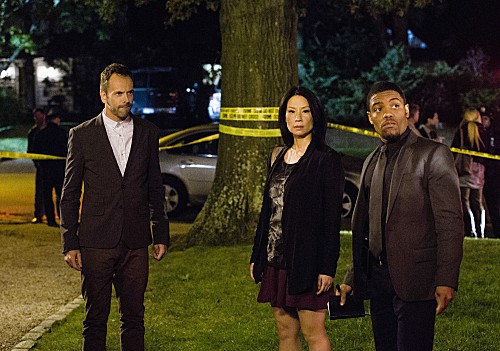 Knowing that Esparza, Monroe, and Clennon all served together in Afghanistan, what else connects them?  Esparza is exonerated because he has no bullet wounds, so we turn to Elizabeth Roney.  Esparza believed he was targeted by Monroe and Clennon because Sam Clennon had an affair with Roney when serving as security detail for her archaeological expedition in Afghanistan, but she denies they were ever lovers.  More to the point, she and her husband Cameron were going through a divorce when she was with Sam and James when they (not including Jacob) were guarding her.

However, there are a couple of questions.  One involves the Buddhist temple of Mezainak, the archaeological site being excavated.  It seems that here all sorts of ancient artifacts were discovered, and in each section a rare bowl was unearthed, except in the last dig, the one where Sam, James, and Elizabeth were all working together.  Curious that.  Then there is 'the curious incident of the dog barking at night'.  Elizabeth's dog, who barks at all men, didn't bark in the night.

That, as they say, is the curious incident.

While in the end the killer is unmasked, and we find that antiquities smuggling is not only the stuff for The Blind Banker, we also find that Sherlock Holmes, while still being opposed to marriage (particularly for detectives, especially good ones like Gregson and Bell), does believe in partnership.  With this, we see that Captain Toby/Tommy Gregson and Cheryl will try to make it work.  They've had 28 years together, and some things one just shouldn't throw away.


I call three major flaws in An Unnatural Arrangement, and they are pretty big.  The first is the whole 'Captain Gregson stalker' business.  It isn't that I object to having a red herring in a mystery.  It's that I object to having a red herring that not only is deliberately misleading but that is forgotten as soon as we are pointed in the right direction.  This Dustin Bishop character has pictures of Gregson in his house, along with clippings of articles on him.  We should know he isn't the guy because he is found far too early in the episode, but once he's caught I don't think we ever learn a.) why he was so fixated on him, and b.) whatever happened to him. I was just not pleased at how this storyline in Cathryn Humphris' screenplay was put in then all but tossed out.

The second is what could have been a potentially good subplot involving Joan and Detective Craig Baskin (Peter Hermann).  Detective Baskin asks Joan for help in solving a case of a string of robberies on falafel stands (New York really is cosmopolitan, ain't it?), but Joan alone, not Sherlock.  She agrees (and whether it involves a potential relationship for Joan is up to the viewer).  However, Joan is angered when Sherlock tells her he already solved the case for Baskin.

It was amusing to see how Holmes blocks out everyone except those in his circle.  "What's a Baskin?" he asks when Joan confronts him on the matter.  Upon getting an explanation, he dismisses it all with the retort that as far as he's concerned, Sherlock knows the other detectives as "Not Bell".  Granted, it is amusing to see that Sherlock a.) seems uninterested in other police officers and b.) he appears to hold Detective Bell to a higher standard than everyone else save Joan and Gregson, but it would have been nice for Joan to venture on her own on this case (no matter how trivial).  This is the second case in as many weeks where Joan starts an investigation only to have Sherlock solve it rather quickly (though in fairness, HE was the culprit in the first one, so he had inside information).  I'll grant that it gives insight into their relationship and how Sherlock sees the world, but I wish Elementary would let Joan break out on her own a bit more.

The third is my biggest objection: a name change.  At Elementary's premiere, we saw quite clearly that Captain Gregson was going to stay within Canon as Tobias or Toby Gregson.  However, by now it looks like Tobias was such a strange name for Americans that it has been changed to Thomas or Tommie Gregson.  I call MAJOR FOUL on this.  You can't expect a loyal viewer of Elementary (and a Holmesian) to not notice this.  I am extremely disappointed that Captain Gregson has gone through a subtle name change (would that the baseball team in my hometown, the El Paso Chihuahuas, undergo that transition).

Honestly, what was wrong with TOBY?

Despite these flaws (although they are rather unfortunate), An Unnatural Arrangement is set up more to showcase Captain Gregson (whatever his first name actually is).  Quinn sometimes gets lost in all the goings-on, but here he does a wonderful job of showing the interior side of the police captain.  His scenes with Balsam are so well-acted on both sides, and it is nice to see the private lives of the characters.  Instead of just focusing on the cases themselves, we see how the job affects those around the characters.

It's an interesting parallel between Toby/Tommy-Cheryl and Sherlock-Joan.  Both partners feel betrayed by the other in that they let work trump what should be a solid relationship.  Let me be clear: I'm not speaking romantic on both sides.  However, the concept of partnership, the equality between both sides, is something that should be important to all sides.  Toby/Tommy has sometimes let his work dominate his private life, and Sherlock has no problem not taking Joan's feelings into account.  She is his protégé, but he is also unaware that she might want to try her hand at things.  Eventually, both sides will have to work together but also recognize they need to do things their own way.

In regards to the crime, again I thought it took the long way round, and was disappointed that 'the curious incident of the dog barking at night' was not actually mentioned (though it's a nice, subtle nod to Canon).  However, in this instance I don't think the actual crime was the central focus of An Unnatural Arrangement.  Rather, it is a springboard for the relationships between Joan, Sherlock, Toby/Tommy, and Cheryl.  In that regard, things went well and I think An Unnatural Arrangement did a good job.  Mind you, not a great job, but a good one.

Next Episode: The Marchioness
Posted by Rick at 1:05 AM