Elementary: On the Line Review 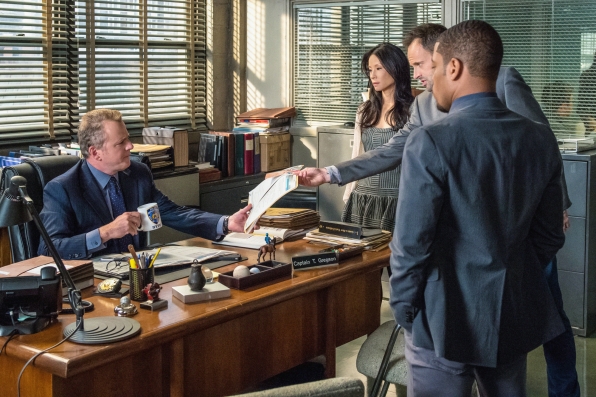 ELEMENTARY: ON THE LINE

Cops Have No Holmes...

Sherlock Holmes, in his various guises, has rarely had much regard for police officers.  Plodders and half-wits who bumble and stumble to success, coppers are not the heroes in the Canon.  Those Sherlock does think somewhat well of (Inspectors Lestrade and Gregson) are 'the best of a bad lot'.  Low praise indeed from the world's greatest consulting detective.  Elementary continues that proud tradition of Sherlock Holmes regarding most police officers with contempt.  We've seen this in An Unnatural Arrangement, where a genuinely puzzled Holmes wonders who Detective Baskin, who has asked Joan Watson for help in his own case, is.  "What's a Baskin?" he asks his protégé, adding that when it comes to the rest of the precinct, all other officers fall under the moniker "Not Bell" (a reference to Detective Marcus Bell, with whom Sherlock and Joan work with).  In On the Line, that conflict between Captain Gregson's reliance on Holmes and the precinct's dislike for him comes to fruition, and we also get a fascinating case with an exceptionally strong guest star performance.

Sherlock Holmes (Jonny Lee Miller) has been working as a consultant for the NYPD for some time, and while Captain Gregson (Aidan Quinn) has total faith in his work, the other officers do not.  This comes to a head with the apparent murder of Samantha Wabash.  She was found dead by a bridge, shot in the head.  Holmes quickly puts it together that it was not murder but suicide (which isn't a surprise since we saw it all happen), but we then discover that this whole situation emerged due to a cold case.  Samantha's sister Allie was murdered years ago, and Samantha knows who did it.  It was Lucas Bundsch (Troy Garity), but she has never been able to prove it.  With a mixture of desperation and turmoil, Samantha's attempts to frame Bundsch for her own 'murder' flopped, but now Holmes suspects that there is more to the Wabash murder than first thought.

He decides this cold case deserves to be opened, and Detective Coventry (Chris Bauer) is extremely unhappy about this.  In reality, Coventry reflects the views of most of the precinct, who think Holmes is an interloper and an arrogant prick to boot (their views on Watson, though not specifically addressed, I figure are a mix of general indifference, slight annoyance that she's with Holmes, and an object of desire).  Holmes really has no time to hold the precinct's collective hands, nor to go into a charm offensive with them.  He has work to do, and do it he will, his way. 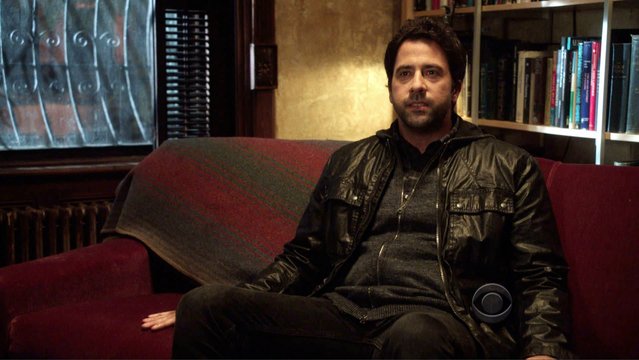 Bundsch however, has taken things to a new level.  He now begins to taunt Holmes, who suspects that he is a serial killer.  Again, there is no solid proof, but Holmes is on to him.  Holmes and Watson now come upon the link between Allie and other victims: it isn't similarity but geography that places him as a suspect in more crimes.  One of them is that of the disappearance of Kathy Spaulding.  Her husband Tim (Eric Sheffer Stevens) has joined an online support group, and there he has made contact with another potential victim's mother, Cynthia Tilden.  Making contact, Holmes and Watson go to Syracuse, but soon discover that this was all a rouse, for the woman they find is not the actual victim's mother.

An enraged Sherlock knows he's been hoodwinked, and in his anger finds Bundsch and strikes him, despite being taken off this case.  The anger Holmes has makes him contemplate framing Bundsch (which is what Samantha tried to do in the beginning), and it takes all of Watson's persuading to stop him from following on this.  However, Bundsch actually made one mistake (apart from taunting Holmes with news of a new potential victim), one involving the size of his recording studio, and this is the key to not only save newest abductee but also Mrs. Spaulding, traumatized but still alive.

Holmes tells Watson he is not a nice man and knows it, so Joan is going to have to live with it.  Captain Gregson tells his men that while he knows they are all good officers, Holmes is here to stay, so anyone who has a problem with it, well, the door's that'away.

This is an interesting case in that Holmes finds that getting at the solutions is easy, getting to the motives is hard.  Behind the cold exterior that finds the death on the bridge amazingly easy to solve, Holmes discovers that it is not just a case of getting to the truth, but to "the truth".  It is also wonderful to see Holmes come across an adversary who, while not as brilliant as him, still manages to push his buttons.  I wondered whether Sherlock Holmes was losing focus on solving the case, letting his ego get in the way.  It might have been that in another time he would have framed Bundsch (and successfully so), but now he has something he probably wouldn't admit he needs but has come to rely on: a support system of I daresay 'friends' who are just as valuable at getting to the conclusion as his own intellectual prowess.

Despite himself Sherlock Holmes has evolved this season of Elementary, and that is a credit to both Jonny Lee Miller's performance, the writing (in this case, Jason Tracey), and series showrunner/creator Robert Doherty.  With Miller, he allows those little cracks of humanity, compassion, and even vulnerability to creep through: his rage at Bundsch's manipulation, his reluctant admission that Watson has a tempering effect on him, while maintaining that somewhat high regard for himself (and low regard for officers not named Gregson or Bell).

Elementary is turning into a strong show that is slipping out of other Sherlock Holmes adaptations' shadows, Miller as the head and Watson as the heart.   In many ways, this is the way it has always been in the Canon, but I digress.

Garity does a good turn as the manipulative Bundsch.  Did it veer a bit towards the 'I'm evil and I know it' school of villainy?  Perhaps, but now after seeing Jim Moriarty from Sherlock, I'd say Garity was an exercise in restraint.   I also thought well of Tracey's screenplay addressing something that had not been covered: how the precinct itself thinks of Holmes.  Most of these brash New York cops aren't happy (and I imagine most in Scotland Yard weren't thrilled either), but at least they were not painted as all villains or just jealous.  They were seen more as aggravated at this man who has 'bewitched' their Captain than just hateful for hate's sake.  On the Line also gives Quinn a chance to show that Gregson is both loyal and appreciative of Holmes' skills.

I thought the twists worked well and was highly impressed by them, and felt it was positive that we were allowed to have Mrs. Spaulding live to be reunited with her husband.  So often in police procedurals we get there too late, so to see a happy reunion is a nice touch.

I was impressed with the case, with the twists and turns to get to the resolution, and with the continuing exploration of Sherlock Holmes as a person, not just as a cold, logical thinking machine.  I was highly impressed with On the Line, and think Elementary has done some of its best work in this episodes, with hopefully more like it in the future.

Next Episode: Tremors
Posted by Rick at 8:05 AM