Sherlock Holmes is not seen as a man with much warmth or 'the personal touch'.  Poison Pen continues what seems to be the theme of Elementary Season Two: a personal exploration of the main character, one who finds that not only does he need people in his life but that his actions affect others in emotional ways and not just intellectually.  Poison Pen has moments of humor, but on the whole it is built around the idea that the past truly is prologue.

Well, that was a false lead, so Sherlock Holmes (Jonny Lee Miller) and Joan Watson (Lucy Liu) turn to the Delancey family.  There's his widow Perry (Noelle Beck) and the nanny, Anne Barker.  However, Holmes recognizes Anne as Abigail Spencer (Laura Benanti).  Abigail, back in 1991, was accused of murdering her father, creating a media frenzy.  During and after the trial, a 15-year-old Sherlock under the name Sean Holmes contacted Abigail and they began a correspondence.  He suspected Abigail, and wanted to probe her mind.  However, they had another connection: Sherlock was himself bullied at his boarding school. 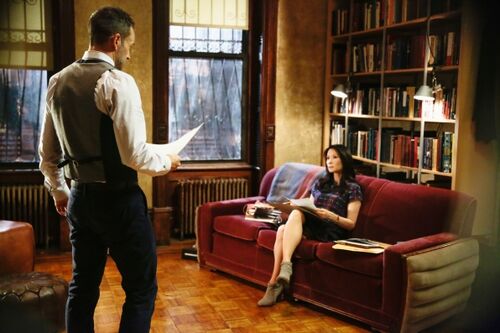 As the case starts expanding, we get a few good twists.  One is that just about everyone wanted to kill Titus.  His widow's alibi was that she couldn't have killed him because she was off buying the medicine she planned to use to kill said husband.  Perry had put a detective on "Anne", suspecting her and Titus of having an affair.  When she discovered Anne's real identity, she plotted to use it to her advantage.

Two is that Abigail's identity has both been exposed and she discovers who Sean really is.  Three is that Abigail is now a strong suspect, thanks to older son Graham (Samuel H. Levine), who caught an argument between Abigail and Titus on his phone.  Four is that Titus kept his own rather sick secrets involving his sons, and worse, those secrets were recorded on an tablet.  Titus' killer is exposed, but we see that Abigail steps up to the plate.  She confesses to the murder rather than a.) allow the real killer's life to be more ruined that it already was, and b.) she had indeed murdered her father all those years ago.  Sherlock, with a mixture of anger and regret, contacts the real killer and tells him two things.  Sherlock will be watching him closely to make sure he does not strike again, and that should he need to talk to someone, he's available.  Poison Pen ends basically where it begins: Sherlock at the gym, but this time as he punches a bag rather than a sparring partner, we see Sherlock silently releasing his anger and daresay pain, with every punch.

Poison Pen has much going for him, primarily in terms of character development.  Liz Freidman's screenplay allows for great character development without using dialogue.  We see this in Liu and Miller's performances.  Liu's Watson is allowed to do some investigating on her own, and she comes up to being a strong and competent detective on her own.  She is the one who notices Sherlock knows more about Anne than he at first lets on.  She is also the one who finds that the tablet has a secret hiding place.  In fact, her methods are so similar to Holmes' that Detective Bell (Jon Michael Hill) cracks that she's beginning to sound like Holmes.

Miller is equally adept at how he communicates a lot without saying much.  He's still the wiry Sherlock of the past, determined to solve this puzzle for himself.  However, in his scenes with Benanti, he shows vulnerability and hesitancy, as if approaching her means approaching the difficult past he'd rather not revisit.  Further, we see at the end of Poison Pen how much Holmes has evolved in the two years he's been in New York and in recovery.  The anger he has towards the murderer (probably because it meant a person innocent of this crime is taking the fall) is mixed with a sense of compassion towards the physical and emotional pain the killer endured.  All these conflicting emotions, and the fact that he has emotions in the first place, gives Miller a chance to act just with his face, and in those few moments he says so much.

The guest performances were equally great. Benanti is torn and conflicted as Anne/Abigail.  Whether you want to see it as a mirror of the Adler/Moriarty situation where a person Holmes cares about/piqued his intellect is also a murderer I don't think was the intent.  She was excellent whenever she had to show the conflict within Abigail, defending herself against charges old and new.  A particular highlight was Samuel H. Levine as Graham Delancey, Titus' elder son.  He went from angry witness to hurt victim to future potential returning guest star so well.  His final scene with Miller showcased two great performances that were believable and genuine, as if one really were catching Graham and Sherlock in the middle of a conversation.  This is early in his career, but with Poison Pen as a calling card he may have a bright future.

If I were to have something to criticize in Poison Pen it would be the first act with the S&M bondage gear.  Not only was this thrown in to make the case appear more sordid than it really was, but it also led to a totally false clue, one that just put in nothing to the story.  It wasn't only that the S&M business really had no business being there, it makes it more illogical.  There really was no reason for Jeffries to slip on the gear, and there really is very little motive for any of this.  This subplot seemed there only to stretch the story and to throw everyone off the track.

Still, while this S&M business makes the episode weaker than it should have been, the performances and the twists that did make sense (not the S&M one), made Poison Pen into another strong episode in Elementary's second season, showing that there will be a small chance for a sophomore slump.

Next Episode: Ancient History
Posted by Rick at 5:40 AM