Elementary: The Hound of the Cancer Cells Review 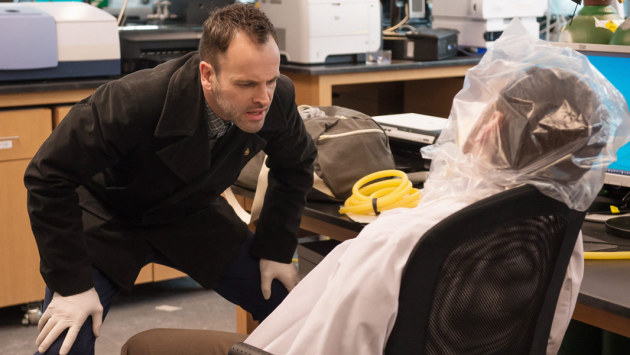 ELEMENTARY: THE HOUND OF
THE CANCER CELLS

Sherlock Holmes' most famous story gets a nod with The Hound of the Cancer Cells, but it's a nod in name only.  No demon dogs in this Elementary tale.  We get a medical mystery, with some great twists and turns and that patented Elementary exploration into the characters lives and emotions thrown in.  The Hound of the Cancer Cells is a strong mystery and a welcome return to our favorite Junior Detective.

That's right, Detective Marcus Bell (Jon Michael Hill) is finally back on the force, having passed his medical and able to shoot straight.  Joan Watson (Lucy Liu) is thrilled at this, and is surprised that the party the precinct is throwing for him later that week, Bell not only invites her but asks that her partner, Sherlock Holmes (Jonny Lee Miller) come too.  Watson is surprised given that it was Holmes that put Bell's career in danger in the first place, but Bell seems to be over that (or has come to understand in one of Elementary's best running arcs that Holmes and Bell are more alike and closer than either wishes to admit).  Bell has his own case as well: a young witness in a shooting, Nicole Watkins (Christina Jackson) has gone into hiding, and he asks if Holmes and Watson can serve as an extra pair of eyes.

This is the secondary case, more with Bell than with Holmes and Watson.  The main case involves one Barry Granger (Jason Danieley), whom as Captain Gregson (Aidan Quinn) wryly observes in a rare moment of quipping from the usual business-like Precinct head, is "M.D., Ph.D., D.O.A.".  He is found dead of an apparent suicide via helium, along with a suicide note stating that 'it's all true'.  This "It's All True" relates to The Hound, a device that Granger was working on, which would be able to detect cancer cells based on breath, operating the same way a breathalyzer detects alcohol.  The company's founder and president, Hank Prince (Mather Zinkel) is shocked that a mysterious figure known as Adam Peer (or A. Peer), a professional whistleblower has targeted his device.  He isn't a suspect because he has an alibi...his mistress.

Granger was seen arguing with a girl on tape, and Holmes tracks her down to a travel agency.  In a surprising turn, the agency is closed within hours of Holmes' visit, and we learn the truth.  The girl in the video, identified as Dalit Zirin (Shiri Appleby) is not a former lover of Granger.  She just happens to be a Mossad agent.   The Israeli intelligence agency has no interest in Granger or The Hound, but Dalit was Granger's college friend whom he had asked to investigate A. Peer, whom she thinks killed him.  Granger was fully aware of Dalit's real job and had hoped she would use her resources to track down A. Peer.  She refused, but now with his death she wants Holmes to find his killer.


Meanwhile, Watson manages to find Nicole, who is being sheltered by her old teacher, Manny Rose (Ron Canada).  The scared and pregnant teen doesn't want to testify, and Watson understands her reasoning.  She does get Bell the message, who uses the opportunity to meet Mr. Rose.  Rose is a legend in the neighborhood for having stood up to bullies and drug dealers, being a force for good in a troubled area.  While Bell doesn't see Nicole, he tells Mr. Rose that he too understands if she won't testify.  Mr. Rose, for his part, hates how these thugs are getting away with things.

Marcus' party is a subject that Holmes is avoiding at all costs.  Watson figures its guilt for his role in Bell's predicament, something to which Holmes doesn't exactly cop to but doesn't quite deny either.  Holmes would rather look for A. Peer, and find him they do.

Rather, I should say 'them', for A. Peer is two people, one of whom is Granger himself.  Therefore, if A. Peer is Granger, and if A. Peer killed Granger, but Granger didn't commit suicide (let alone accuse himself of fraud), and if A. Peer's partner didn't kill Granger, then who did?  The A. Peer who charged Granger with falsifying his results (and would ruin both his career and Prince's company) was a fake.

We then get the curious case of the soon-to-be-ex-Mrs. Prince, found shot in her home.  Prince has the same alibi, a most convenient mistress.  Holmes, however, manages to ferret out both the Granger and Mrs. Prince cases, which all tie together in an extraordinary twist.

Bell's party is in full swing, but he stands outside, cautious.  He has just come from the morgue.  Mr. Rose decided that sometimes one has to take the law into your own hands.  He had gone up to the thug kingpin and killed him, but the thug's henchmen had returned fire, with both of them dead.  Holmes walks up to him, finally having broken down to go to the party.  Both see that being detectives carry heavy burdens, and while one figures they would go to the party in a while, they walk off together to a coffee shop round the corner, the beginning of a beautiful friendship.

The Hound of the Cancer Cells I think does some things extremely well.  Bob Goodman's script gives us a story that basically twists in on itself.  The opening murder is both surprising and almost comical (hearing a man's final words spoken through a helium-filled voice makes it all so surreal).  It shows Captain Gregson is a sharp detective in his own right: he was the one who suspected Granger was not a suicide in the first place, but not how it was done.  I think that how the resolution all played out worked exceedingly well, except for the second murder, which seems almost thrown in there.

I even enjoyed the True Romantix.com bit thrown in, that pernicious website that Joan still uses to find a date and which provides a valuable clue in solving a case.  I wonder if anyone actually has used TrueRomantix.com? 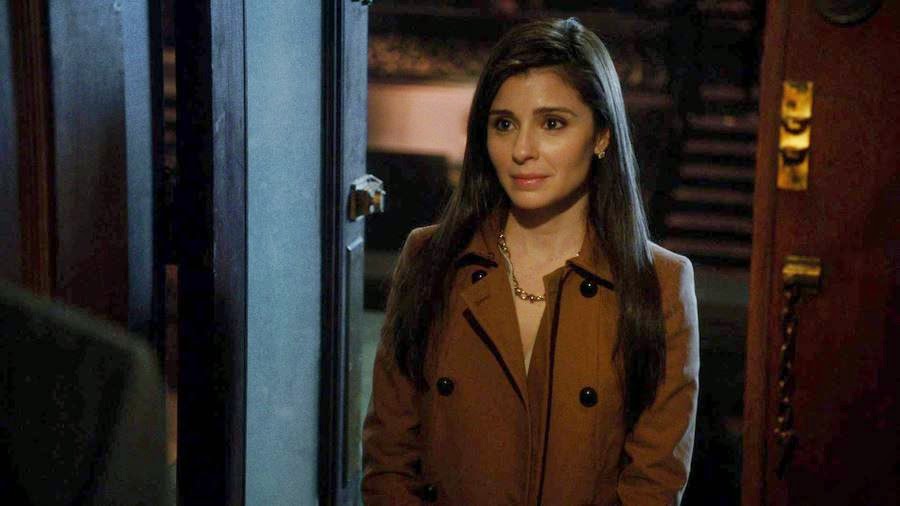 I also enjoyed how the various elements of A. Peer and even the Mossad got thrown in without looking too far-fetched. We get some great guest stars in the story.  Zinkel's Prince in retrospect was the obvious suspect, but he played it all so well that I was thrown for a loop in the end.  I've also been in love with Appleby since Roswell (can I say I was in love without making it sound nutty) and while her role was small (and oddly reminiscent of Keri Russell's character in The Americans), I think her character has great potential.  The Israelis, perhaps?  I'd be very happy to see Holmes work with Dalit again, if only to explore more of both her character (having a spy would be so helpful in cases) and Appleby as an actress.

The Hound of the Cancer Cells also has great quips and lines, of which Miller is among the best at delivering.  Miller seemed to be in top form here: sharp, sarcastic, highly adept at making even the most simple comment tinged with cutting cynicism.  When Watson brings in the framed target that got Bell back on the force, Holmes just looks at it.  "Bullet-riddled man.  Is the décor in here not American enough for you?  We could get some Rockwells, deep-fat fryer," emphasizing the last word to add a coda on his disdain for both American culture and its violence.  He's equally sharp and sarcastic with both Prince and Dalit, finding the Mossad's work in its strongest ally amusing.  However, he also shows how much Sherlock Holmes has changed since we met him a year ago.

We know he's avoiding any talk of Bell's party and can even figure out why.  When he verbalizes it however, it still impacts us.  "Misanthropy was so easy, Watson," he tells her.  "Elegant.  I miss it sometimes."  I would disagree that Sherlock Holmes (at least the Elementary version) was thoroughly misanthropic, instead I would say aloof and remote, but I digress.  His feelings of guilt about Bell, coupled with his shocking admission that a.) he thinks of Bell as a friend, and b.) he thinks highly of Bell's detective skills (having referred to all the other detectives in the precinct as "Not Bell", show that despite himself he likes Marcus, and finds that his actions have consequences on those he cares for.  This is something Sherlock Holmes struggles with: the conflict between his cold, logical nature and his developing human side.  It has been fascinating to watch and one hopes Elementary continues to chronicle his struggle as a major part of its story.

Hill similarly had great moments realizing that being back on the force has consequences.  He too sees the man he once dismissed as "Harry Potter" as I daresay an equal in the concern to solve crimes and make their worlds better.  They've reached a different level of trust and camaraderie that neither will admit openly, but that is still there.  They've learned to respect each other, appreciate the other's abilities, and understand that they are not that different.

They may even be friends.

I enjoyed The Hound of the Cancer Cells; though not perfect by any means, the wild twists (even if not strictly logical) to the case and the continuing development of the characters still made it one of the best Elementary episodes so far.  And, with any luck, Demon Dogs may still appear in New York...


Not from this episode, but I couldn't resist...

Next Episode: The Many Mouths of Andrew Colville