In terms of Oscars, this was my best year prediction-wise.  Out of 24 nominations, I scored a fantastic personal best of 22 correct.  I beat out Entertainment Weekly's predictions (they got 19 right) and beat out fellow OFCS member Tim Brayton by one (thank you, Documentary Feature).

In what is a bitter pill for me to swallow, the only ones I got wrong were the short film categories: Live-Action and Animated.  It's extremely bitter because last year, I got to see the nominees and predicted the winners in those categories accurately.

After the debacle of Seth MacFarlane, the Academy went to America's favorite non-threatening comedienne: Ellen DeGeneres, a woman so sweet that even her lesbianism is seen as almost endearing and surprisingly non-controversial.  And safe she was...extremely safe.  So safe that she made the long show (it went over by about half-an-hour) boring.  MacFarlane hid behind 'edgy' bits (We Saw Your Boobs) but to me he seemed desperate to get people's approval, even love.  DeGeneres on the other hand, went out of her way to show that she wasn't going to do anything to upset anyone.  We got cute moments (the world's most Tweeted selfie...take that, Pope Frankie!), the pizza schtick.  Then we got some moments that were a bit odd (at one point, DeGeneres is sitting on stage with a guitar that she never plays...a nod to The Moon Song's a cappella performance perhaps?), and even slightly and surprisingly nasty (DeGeneres speaking more loudly at 84-year-old nominee June Squibb to 'help her hear', calling Liza Minnelli a great female impersonator).  To be fair, that was as edgy as DeGeneres got, but at times her 'endearingly nervous' mannerisms dragged the show.  Ironically, just as MacFarlane turned the Oscars into a Family Guy episode, DeGeneres might have just thought of the Oscars as her daytime chat show in primetime.

Fortunately, our favorite naked bongo-playing hick got the 'really weird Oscar moment prize', but not without some serious competition.

But more on that later. In terms of winners there were no surprises.  The glut of pre-Oscar awards had all but made the actual recipients known for months.  The good news is that three of the four acting winners were all first-time nominees.  That speaks to the idea that people were being rewarded for their work rather than their longevity.  Same goes for the director (the first Latin American winner and only second non-English world winner).

Is it good that the Oscars provided no surprises?  Sometimes the fun in watching was seeing a totally unexpected name: from The Greatest Show on Earth beating out High Noon and The Quiet Man at the first televised Oscars to Christoph Waltz (which DeGeneres managed to mangle by calling him 'Christopher' before immediately correcting herself) stunning the audience when his Django Unchained beat out Tommy Lee Jones' prohibitive win for Lincoln, we need some twists.  This year, however, everything pretty much went as expected.  The real twists weren't in the winners, but in their acceptances and the presenters.

DeGeneres was not the only person who got a name wrong, but at least she realized her error immediately.  For a man who constantly fights gay rumors, John Travolta isn't up on his Broadway.  He misidentified the singer of the Oscar-winning Let it Go, changing her name from Idina Menzel to Adele Dazeem.  Fortunately, she was too nervous to really say anything about how she turned into I guess a Cockney Arab.  Bless his heart: he managed to give McConaughey a run for his money in the 'wackadoo' department.

In other presentations, Chris Hemsworth's Aussie accent and baritone were so strong that subtitles would have been appreciated, and Harrison Ford looked slightly deranged when presenting the first of the three Best Picture nominees.  I confess also to chuckling when I heard this intro, "Please welcome the talented Chris Evans" when he introduced one of the many clip reels for the theme of Heroes in the Movies.  We had Ordinary Heroes, Superheroes, Animated Heroes, Historic and Literary Heroes...but I don't remember much emphasis on people such as doctors, nurses, military, police, firemen, ambulance, teachers... I DID note that the clips were heavily geared towards newer versions.  In the Superheroes clips, we had lots of footage of Henry Cavill, Christian Bale, and Andrew Garfield as Superman, Batman, and Spider-Man respectively, but I don't think they had any clips of Christopher Reeve, Michael Keaton, or Tobey Maguire in their versions.  Similarly, the Animated Heroes had a lot of Shrek, Hiccup from How to Train Your Dragon, and Toy Story, but little in terms of films made before 2000.  Yes, there was Dumbo and Snow White, but by and large even the clip reels were more youth-oriented.

There are two presenting groups that appeared to be the strangest pairings of the night.  What connection Matthew McConaughey and Kim Novak have is still a mystery (apart from the fact that they get the opposite sex excited).  We had a cougar and a stripper, but their banter was veering into 'you got me excited' riffs that were in turns creepy and...well, creepier.

There is also a sad perversity in having Novak utter the word, "Frozen" given her appearance.

The other presenting group was Amy Adams and Bill Murray.  Both are legends in my book, but the general consensus is that Murray looked shockingly old, haggard, and a little (more) bonkers than he usually is.  One of my friends made a comment about that maybe Murray was still in Zombieland.  Still, despite everything (including the appearance that he was hitting on Adams, matching McConaughey's efforts with Novak), give him credit: his shout-out to Harold Ramis was touching and clever.

In one last bit, Goldie Hawn looks like she and Kim Novak have been hanging out together.  The term 'Catwoman' came to me, and it was surprising to say the least to see two beautiful women not look their best.

Let's move on to the winners and acceptance speeches.  We have two great moments. 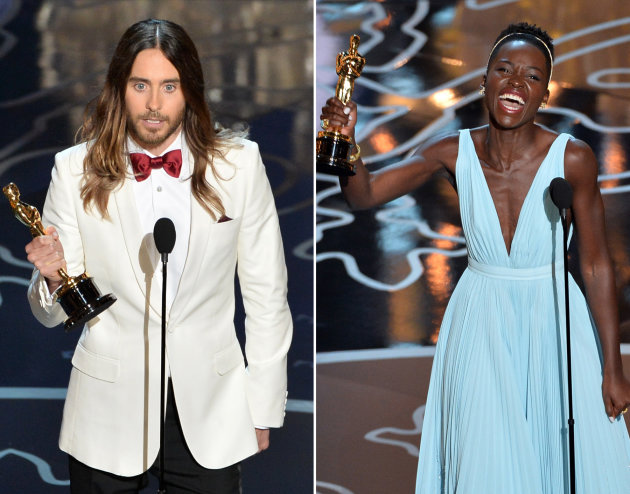 The best speeches were from the Supporting winners.  You couldn't pay me to go to a 30 Seconds to Mars concert, but in his tribute to his single mom, to those who have died of AIDS, and even those in Ukraine and Venezuela, Jared Leto was classy and dignified.  He was topped though by Lupita Nyong'o, who acknowledged that her great joy came at the cost of someone else's misery.  She was graceful, generous, and so beautiful in her eloquence.

Cate Blanchett was also a great moment, when she tells the crowd that women on screen can sell tickets.  In a male-dominated world like Hollywood, Blanchett was able to tell it like she sees it.

We did have some great unscripted moments, and my favorite was Darlene Love, one of the subjects of the background singers documentary 20 Feet From Stardom.  An impromptu snippet of His Eye is On the Sparrow brought down the house, showing why sometimes the backup singers can actually outsing the main performers.  Seeing Pharrell Williams perform Happy and get Nyong'o, Meryl Streep, and Adams to shake their groove things was similarly fun.  When Kevin Spacey threw in a little House of Cards at us was similarly wonderful. 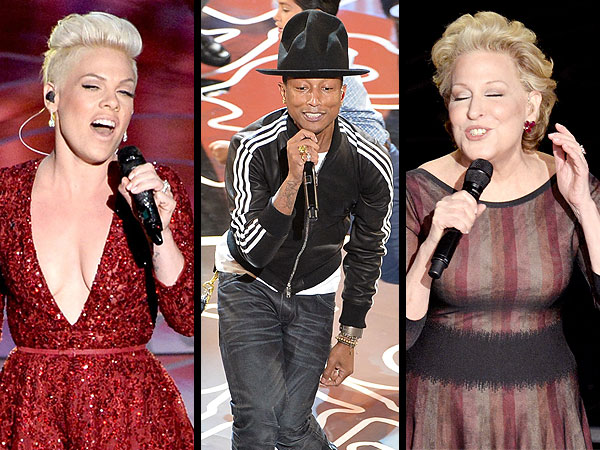 For me, perhaps the worst moment was the In Memoriam tribute.  We had a repeat of last year when Barbra Streisand sang The Way We Were.  This year, we had Bette Midler sing The Wind Beneath My Wings (which I still think is a strange song to sing, out of place as to how people like Shirley Temple or Peter O'Toole supported HER).  However, at least The Way We Were was connected to the presentation last year since it ended with its composer, Marvin Hamslich.

Not only was this song out of place, but Midler's performance was weak.  On second viewing it wasn't as terrible as I thought it, but it still wasn't good.  Midler couldn't hit the high notes we know from the song, and her flapping her arms like wings was equally nutty.  Pink's performance of Over the Rainbow by comparison was sublime and classy (things you don't associate with Pink often).  I still was puzzled as to why a.) The Wizard of Oz was singled out for salute when 1939 was the Greatest Year in Film history and b.) why Whoopi Goldberg introduced the song when I thought Judy Garland's three children were going to (and perhaps should have). 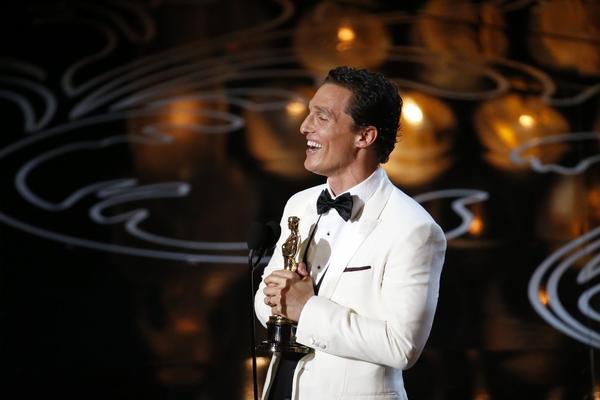 Finally, let's move on to our fellow Texan.   I expect some backlash against McConaughey...he's playing a TEXAN!  This isn't a stretch for him.  When has he played a role where his distinct drawl has ever been masked?  Yes, it was a great performance, but we still can't get past some of his lesser films (the majority of his body...of work) to put him up there with the never-won O'Toole, Burton, Grant, or Powell.  In turns loopy and respectful (nods to God and his mother in that order followed by a declaration that his late father was dancing in his underwear with a Miller Lite in Heaven), it was vintage McConaughey.  So he's his own hero, or his future self is his hero?

What's so nutty about THAT?!

Seriously, would we want Matt to be anything other than slightly bonkers?

In the end, the 86th Annual Academy Awards were pleasant, harmless, a little dull and above all predictable...right down to the speeches.