Addiction can be a source for intense drama or wry amusement.  Thanks For Sharing attempts to have it both ways, and it suffers slightly because it wants it both ways: to be funny AND to be serious.  However, the tonal shifts don't alter a mild enjoyment of the film itself, even if the whole is less than the sum of its parts.

Mike (the second story) has his own problems.  A sex addict as well as alcoholic, he does not trust his son Danny (Patrick Fugit), who himself is a drug addict who dismisses AA-style meetings.  His wife Katie (Joely Richardson) is thrilled to have Danny back, and father-and-son do appear to be building rapport with each other.  His wife's disappearance of her pills, however, puts an end to that, as Mike accuses Danny of taking them.  Danny denies, they have a physical fight, and he disappears. 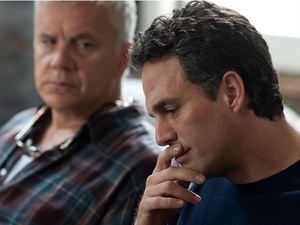 Adam reluctantly begins to sponsor Neil (Josh Gad), a doctor who jokes his way through meetings.  He grinds up against random women, and has been ordered to meetings by the courts.  However, he is discovered 'upskirting' (videotaping up women's skirts), and is promptly fired from his job.  He continues to struggle between his insatiable desires and his dreams of medicine.  Curiously, he finds a friend in Dede (Alecia Moore, better known as pop star Pink), one of the few women in the sex addicts group.  Though not officially sponsoring each other, they build their first non-sexual relationship with someone of the opposite sex.

Adam, Neil, and Mike all reach crisis points: Adam falls off the wagon big time after he and Phoebe break up, Mike discovers his son didn't take the pills and finally apologizes to a bitter Danny, and after attempting to hook up with an old (and I daresay psychotic ex), Adam turns to Neil's medical training to save her life.  In the end, Phoebe and Adam get back together, Mike and Danny reconnect and start rebuilding their relationship, and Neil begins to take firm steps to be fully sober, with Dede as moral support.

What I found quite good about Thanks for Sharing is the performances.  I don't think we got one really bad performance all around (well, mostly).   Ruffalo is still one of our best actors around, and his Adam is someone who we see firmly committed to his sobriety and who genuinely struggles between keeping his demons in check and his growing love for Phoebe.  Robbins similarly does great work handling the drama of Mike: the elder statesman of the sobriety group who hasn't gotten to Step Nine with his own son.

I also thought well of Paltrow, who made the relationship with Adam seem natural and real.  I do wonder whether the fact that her character was a breast cancer survivor could have been put out there for greater emphasis (it seemed to just hang there) and never understood her lack of understanding that for Adam, sex was a dangerous thing.  I know she says she is an extremely sexual person, but I did wonder why she couldn't understand this was a major issue for Adam until it was nearly too late.

However, to their credit both Paltrow and Rufallo work so well together, having great rapport and making the Phoebe/Adam relationship seem natural and real.

Gad had a curious trick to pull off.  In some ways he was the 'comic relief', his struggles being played almost for laughs (as when his chubby character had to ride bicycles to avoid the temptation of grinding on women in the subway or worse, being forced to run blocks to help Dede through her crisis).  Sometimes, though, he had to play it perfectly straight, making his crumbling into something to empathize with.  Gad, to his credit, managed to do both (though I would argue this was part of the problem the film had in its ever shifting tones from comedy to drama).

The biggest and most pleasant surprise was Pink/Moore as Dede.   Moore is starting out in films, branching off a very successful music career, and in Thanks for Sharing she does such a marvelous job.  Moore shows a depth and range not associated with other singers trying for movie careers.  Her opening scene where she talks about how promiscuous she has been until now is touching and beautiful, making us truly care about her.  She handles the comic moments her character is given with equal grace (a free-form dance session with Neil that is a bit trippy), but in her scenes with Gad, we never get the sense that either wants to have sex with the other.  Instead, we see the growth of a genuine friendship.

I believe that with roles as good as that of  Dede, along with strong direction and a genuine commitment on her part, Pink can turn into a serious and respectable actress.  I don't know if she will be her generation's Meryl Streep, but I think Pink has a solid career as a good actress and is someone who should work in movies more.  The fact that she could more than hold her own against veterans like Paltrow and Robbins (both Oscar winners) and professionals like Ruffalo and Gad show that Alecia Moore can do wonders on film.

However, it is near the end, particularly with Emily Meade's Becky (Adam's ex) where the film really goes haywire.  First, her S&M type requests freak everyone out, and then her reaction to Adam's refusal to slap her make the whole film look deranged.  That, however, is perhaps the coda on Matt Winston and co-writer/director Stuart Blumberg's missteps on Thanks for Sharing.

The movie goes from broad comedy to serious drama at the drop of a pin, and I figure it is trying to be both funny and deep.  However, the shifts don't always work and one wonders if they weren't sure they were going for one and threw in the other (or if they knew WHICH one they wanted).  There could be comedy in a serious film, but perhaps they could have toned that down.  There could be drama in a comedy, but when it comes to addiction, just how much comedy to put into serious situations is something that could have been thought out a bit more.

Minus that, Thanks for Sharing is a showcase for good acting (especially from Pink) even if what the actors are asked to do doesn't quite hold up story-wise.   It is not a bad film, but it could have been better.  In the end, we thank you for sharing, but perhaps they could have shared something a little more cohesive.