Sherlock and His Lestrade Shadow...

One of my great complaints about Elementary is that great guest stars and guest characters get dropped, never to be seen again.  There have been cases where we meet someone with great potential, who do not return.  Ms. Hudson hasn't come back.  Watson's potential boyfriend(s) has not returned.  Even suspects and victims who may lend the show something extra just disappear.  Out of all the characters who may play a good role in the series, the only one who has returned has been Sherlock Holmes' pet turtle, Clyde (who is a personal, and I believe, fan favorite).  Perhaps Elementary is just focusing on the obvious characters from the Canon: Adler, Moriarty, Gregson, and in The One-Percent Solution, Lestrade, the Scotland Yard detective who took credit for Holmes' work through mutual agreement.  We have these two frenemies clashing, collaborating, and coming to some sort of rapport, and a strong case with humor and twists that work.

A bombing at a hotel has Sherlock Holmes (Jonny Lee Miller) and Joan Watson (Lucy Liu) investigating, but foisted upon them is a self-proclaimed 'security czar'.  This security czar is none other than Gareth Lestrade (Sean Pertwee), last seen in the season opener Step Nine.   Between then and now Lestrade has become (in his mind) a Great Detective.  He even has an aide, one Miss Truepenny (Sarah Goldberg), whom he is training to follow in his footsteps.  Holmes is entirely dismissive of Lestrade's manners and his abilities, seeing him more as an irritant than a help.

Lestrade, however, sees himself as his own man (even if in every step of the way Holmes constantly outwits him).  The bombing at first may be the handiwork of a Unabomber-type called Aurelius, but while Lestrade follows this line Holmes is not convinced, nor is he fully sold on the idea that Occupy-minded waiter John Bowden (Parker Pogue), who left shortly before the table he was serving was bombed, was himself directly connected.

Instead, Holmes thinks that someone connected to a Jacques St. Titan was.  This was the name of a person who booked a room prior to the bombing at the hotel who has yet to be accounted for.  When security footage is viewed, it is none other than Gareth Lestrade!  As the investigation itself continues, Holmes keeps finding more and more information that Lestrade is turning into a suspect.

We learn the truth: rather than being a suspect, Lestrade has become the virtual pimp to Richard Balsille (Bill Irwin), the head of the firm who had two of its employees killed in the bombing.  Balsille, who worked in the Grand Tetons, is voracious sexually, buying people with the greatest of ease to get what he wants.  One of the people killed was planning to lead a coup against Balsille, so he has a strong motive.

However, we do go back to the Aurelius aspect, yielding a most sincerely dead Unabomber.  Once more to Bowden, and finally full circle to uncover that Balsille was involved, but not in the way one would think.

As for Lestrade, he won't go along with Balsille anymore, so he now finds himself unemployed and homeless.  Where, oh where, could he crash for a while?

The One-Percent Solution was smart and highly witty, particularly in a strange subplot.  Holmes has managed to rescue two cocks from cockfighting (and for the record, as someone of Hispanic heritage who saw cockfights, I personally am not offended by either cockfighting or bullfighting, but can understand the American objection to such practices, even if I don't share them).   Craig Sweeny's screenplay makes full use of all meanings to 'cocks', which might have come off as idiotic but here comes off as completely funny and natural.

When Watson comes across the two birds, which Holmes names Romulus and Remus, he tells her, "You seem upset.  You have an aversion to cocks?"  Miller's delivery is so good one is never sure if he understands the double entendre, or merely pretends not to, or just finds the puns too rich to resist.  His face, a mixture of naïve innocence and shrewd amusement, don't give anything away.  Liu's Watson, not finding either the situation or the suggestive talk amusing, similarly does not give what she is thinking away.  "Not as a species," she retorts.

Later, when she is awakened by Remus, she brings the caged bird downstairs.  Holmes says he put him there as an alarm clock.  "I don't care which cock I'm holding,  I just want to know how it got there."  Holmes' face is brilliant, and Watson, finding she has basically been duped, congratulates him.  "You got me to say it," she admits.  Adding a final hilarious coda to all this, she asks, "Why is there a chicken outside my door?"  "To wake you, of course!"

I defy even Sherlockians not to laugh at this exchange, one of the most self-aware I have seen. 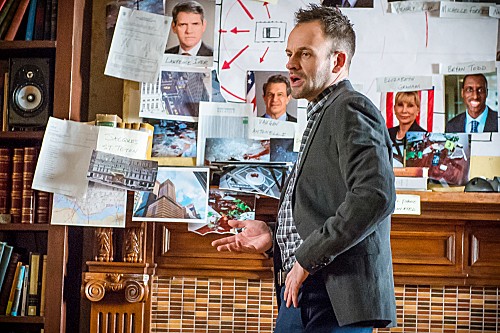 As amusing as all this cock-and-bull show is, in truth it also serves a more clever service.  Romulus and Remus obviously are parallel to Sherlock and Lestrade.  These two cocks are also fighting, not for power or territory or even superiority but for respect: one for the profession, the other for the professional.  At the end, Romulus and Remus are able to live together, and this symbolically is exactly what Lestrade and Holmes are able to do.


In terms of performances it is so great to have Pertwee back.  His Lestrade is a brilliantly formed character: as egoistic as Holmes but without the ability to back it up.  Pertwee makes Lestrade less of a bumbler than what one may remember (I don't think in the Canon he was ever hopeless idiotic) but he also brings a fragile manner to him.  This Lestrade wants to be like Holmes in every way, but while he might be able to he finds the path of least resistance to get the respect he wants.   He even has moments of comedy, as when he tells Holmes that he has managed to track down Bowden (a good bit of detective work, I think).  He tells him he had that Captain Gregson and "that little fellow" go get him.  Given how Holmes has just repaired his relationship with Detective Bell, one wonders what he would think of hearing Lestrade refer to his friend as "that little fellow".

The most telling scene is when Lestrade joins Holmes and Watson as the NYPD are about to bust Aurelius.  Holmes points out the difference between Lestrade and Watson: the former resents Holmes' abilities, while Watson spends her time developing her own.

In short, Pertwee has done wonders with the story and I am glad he has not only returned, but looks like he'll stick around a bit.  The other guest stars are equally great.  Though her role is small I thought Goldberg's Miss Truepenny (wonder where they got that name) lent a touch of humor to things.  I have never been a fan of Irwin (always finding his magic and humor grating) but here he was unrecognizable as the villainous Barsille.  Parker Pogue too, though with a small role, was effective as the radical waiter (though I wondered who his father who bailed him out was...a one-percenter, perhaps?).

The solving of the crime, the twists the story took, the performances from the guest stars, even the moments of comedy and drama, all melded to create a really fun and clever Elementary episode.  Despite the ringtone Sherlock Holmes set for Lestrades' calls, one can never have a Bad Day after watching The One-Percent Solution.

Next Episode: Ears to You
Posted by Rick at 3:28 AM