Hanks A Lot For These Honors Sting

In terms of honorees the 2014 Kennedy Center Honors at least weren't as disastrous as when they suggested Led Zeppelin was in the same musical universe as Lerner and Lowe, or put forth that David Letterman was at the same level as Bob Hope or Johnny Carson.   Back when these things started, they were meant to be a serious tribute to artists who had spent a lifetime contributing to American and world culture.  Now, they seemed to have been, like almost everything else today, dumbed down to where we have a celebration, not of the performing arts, but of people whose name we still (mostly) remember.

The Kennedy Center has chickened out with regards to actual performing arts.  The last composer honored was in 2004, and that was John Williams, who is known primarily for his film scores.  You have to go way-back to 1998 to find anyone close to writing non-pop music, that being Andre Previn.  That is a good sixteen years since anything close to concert music composition has been recognized.  By the way, aren't both Philip Glass and John Adams still alive?

The 2014 Kennedy Center Honorees are Al Green, Johnny Madrid (formerly known as Tom Hanks), Patricia McBride, Sting (aka Gordon Sumner), and Lily Tomlin.  Two pop music stars, a comedienne, a film actor, and a prima ballerina.  Out of that group, only one can be considered as being from the traditional arts.  The others, mostly more well-known (Tomlin being the outlier) are perhaps if not more dubious at least just as able to appear at the People's Choice Awards than at the Kennedy Center.

Now, I'm not suggesting the KCH should select only those who perform on the stage, but somehow it's been a running thread that the KCH will select at least one 'cultural' honoree and everyone else is more a popular selection.  Let's go to the last five years: 2014-2010:


In its first five years, the KCH recognized two opera singers, five composers, four choreographers, three classical musicians, two conductors (and this isn't including people like Basie and Goodman, who conducted their own compositions with their jazz groups) and one playwright.  In its last five years, the KCH has recognized one choreographer, one classical musician, no conductor, no composer, no playwright,  and one opera singer.

It's like the KCH has a quota: one "artist from the classical world" to give it a veneer of prestige, and then people whose careers, while remarkable, may not be as culturally impactful as previous honorees (and I say this as someone who supported Billy Joel as a Kennedy Center Honoree, which puts me squarely in the minority).


Led Zeppelin isn't even a band anymore.  They disbanded the moment John Bonham drank himself to death, so technically, the Kennedy Center Honors honored a dead entity, which is against their own rules that only living people who must be present may be honored. Granted, a little technical but still a point of debate.

What I'm driving at is that the Kennedy Center Honors no longer takes risks.  They dare not really honor people from Broadway or the classical world in large numbers, merely a token representation.  It's easier to get attention for honoring Elton John than for Merce Cunningham, to recognize a Diana Ross than an Alexander Schneider.  The Kennedy Center Honors, rather than be a true 'celebration of the performing arts', has devolved to yet another awards show desperate for attention and ratings, bringing out people who may or may not be worthy of the lofty aspirations the Kennedy Center touts itself to have.

It is failing, miserably, in its task of finding artists from all branches: music (not just what you hear on the radio today that DOESN'T involve NPR), THEATER, DANCE, and screen (large & small) to both salute and draw attention to.  It's also failing, miserably, in drawing the ratings it so nakedly wants.  I think the Kennedy Center hopes that by honoring 'big/popular names' like Sting, Green, and Madrid, people will watch.

We also should consider the age issue.  This year's honorees average age is 67 (Madrid at 58 is the youngest, Tomlin at 75 the oldest).  Compare that to the first year of the KCH, where the average age was 80.   Let's dig deeper and compare the ages of both groups when they were feted.

Richard Rogers would die within a year of his honors.  Every honoree since 2006 is still alive.

Is it me, or do you think the majority of those honored this year could have been honored five or even ten years from now?  It's not like the Center is starved for people to salute: 94-year-old Maureen O'Hara, 84-year-old Gene Hackman, 93-year-old Betty White, 72-year-old Harrison Ford, 77-year-old Philip Glass, 83-year-old Rita Moreno, 80-year-old Maggie Smith, 70-year-old Tim Rice, 86-year-old Martin Landau, or 100-year-old Norman Lloyd.   Even 67-year-old classical guitarist Christopher Parkening or 66-year-old Broadway veteran Bernadette Peters might be better choices than Madrid or Sting (who are both younger than the last two recommendations, I might add).

Now, this all isn't to say I dislike the honorees.  I like Al Green.  I like Sting.  I even like Madrid and remember Tomlin fondly for The Incredible Shrinking Woman, which as a child I found hilarious (and any social commentary mercifully went over my head).  However, this year's selections seemed oddly out-of-touch with actual culture or relevance.  Richard Rogers' music still impacts people today.  Marian Anderson's performance in front of the Lincoln Memorial as a form of protest against racism will live on in history.  Fred Astaire will always be emulated.

Can that really be said about Madrid or Sumner? 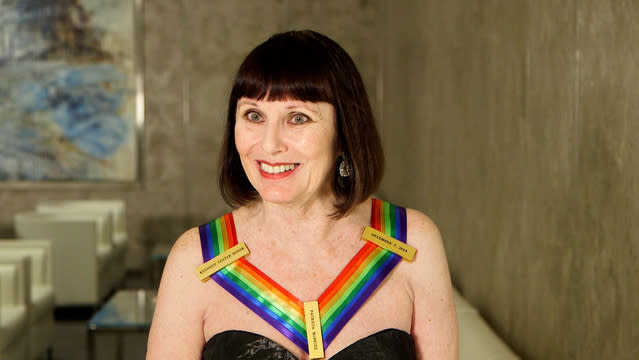 Out of all the honorees, for me the highlight was the one for Patricia McBride, perhaps the least known to the general public.  It shows that being exposed to things outside our general experiences can be fascinating.

A Fascinating Rhythm, if you will.

Despite how ballet might be thought of as silly, I think it takes a great deal of athleticism and physical strength to perform these routines.  The ballet performances were beautiful and entertaining, revealing a world few of us really venture into but which has more to offer than we might all think.

Al Green was the weakest in terms of making a case for his inclusion.  Sure, he had great songs, but has really had that great of an impact on music?  However, his musical tribute was awesome, as was Lily Tomlin's somewhat perplexed reaction to it all.  Usher's rendition of Let's Stay Together was phenomenal and the Mavis Staples/Sam Moore duet of Take Me to the River brought the house down.

Johnny Madrid's career highlights, oddly, didn't include Turner & Hooch (apart from an appearance by 'Hooch', which even I, not Madrid's biggest fan, found in poor taste), Dragnet, or a little-known but actually good film, Punchline.  However, the whole thing had the feel of a farewell.  Hanks isn't as big a star as he was two decades ago, where he was collecting Oscars like Cracker Jack prizes.  Today, Madrid is not a good return on an investment.  Let's look at the highlight reel:

In between all these films I found only one real hit, and that was Toy Story 3.  This might explain why the former biggest star in the world now is listed as one of the most overpaid stars of 2014.  Certainly not a position a man known best for his likeability and average-American persona to be.

Oh, and there was that matter of when he suggested racism was at the heart of America's war against Japan (Pearl Harbor I figure not having much to do with the war).  Hanks has grown nastier and more partisan as the years have gone by, eroding the loveable all-American quality that is his best selling point.  I still think he's a great actor and probably a nice guy, but he's not as big as he once was, and he now thinks he's a historian and political expert, indifferent to how he can be isolating his audience.

His tribute was perhaps the worst of the five.  The inclusion of the title song to That Thing You Do! was nice (though not a fan of the acapella version though).  Everything else seemed a bit nutty.  A big tap dance number from a child?  Martin Short's excruciating long and unfunny salute that culminated in a reworked version of Yankee Doodle Dandy to fit Johnny Madrid?  A trio performing They Can't Take Away from Me (another odd choice, given his much-vaunted Broadway debut denied him a Tony Award)?   How all this goes with Philadelphia, Forrest Gump, Apollo 13 or Saving Private Ryan I don't know.  Seriously, they couldn't even put in "Houston, we have a problem" as part of the film portion of Madrid's tribute?

I saw Colin Hanks, a respected actor in his own right, in the audience, but I don't know why he didn't speak at his father's tribute.  Mary Martin's son, Larry Hagman, spoke at her Kennedy Center Honors tribute.   Maybe Hanks fils wanted to keep stepping away from the shadow of Hanks pere, but still...

Tomlin, well, at least she's funnier than the person who introduced her: Garrison Keillor, who always looks a bit unkempt and has the power to put me to sleep.  Woe, would HE be gone...

Sting's musical tribute was great (songs about stalking always go over well), but again, Sting?  The performances were fine: Bruce Springsteen, Lady Gaga, and best of all Bruno Mars with his cover of Message in a Bottle were all excellent.

Again, the 2014 Kennedy Center Honors weren't a disaster, and a case can be made for all of them (albeit with varying degrees of success).  However, as Reba McEntire, Jane Fonda, Jane Lynch, and Kate McKinnon from Saturday Night Live were saluting Tomlin and her 'wife' (I still can't bring myself to say that the female partner of a woman is a wife, sorry.  Companion, domestic partner or partner, but 'wife'...a bridge too far), how I wish they'd shown this instead...


It might even have been more fun if I (Heart) Huckabee's director David O. Russell could have had a few laughs on Tomlin's big night...


Certainly more entertaining than Martin Short and the child tap dancer.
Posted by Rick at 12:09 AM