Of the two Jennings, Philip is the more comfortable in America.  He likes it here.  It doesn't mean he is disloyal to the Soviet Union or that he will defect anytime soon.  However, unlike Elizabeth, Philip is more work-oriented than spiritually motivated.  Being a Soviet agent is his job, but his life is his family and in being 'American', unlike his wife who is totally devoted to Stalin and Socialism.  He isn't above the creature comforts America provides.  New Car is one where we see the dynamic of this atypical marriage, and see that sometimes being a parent is actually harder than being a spy.

Philip (Matthew Rhys), being above all else, a man, is enraptured by his new car: a Camero Z-28.  The purchase thrills son Henry (Keidrich Sellati) but horrifies Elizabeth (Keri Russell).  Whether she sees it as a sign of Philip's indulgence in Western decadence or just irresponsible spending we don't know.  However, work is interrupting the new car smell.

Elizabeth's protégé Lucia (Aimee Carrero) breaks into the home of Captain Andrew Larrick (Lee Tergesen), their closeted mole at the Navy, determined to avenge her family.  Lucia, either foolishly or recklessly, decides to take on an experienced Navy captain on her own.  Perhaps she thought that because Larrick is gay, he would be an easy target.  Not on her life: Larrick is able to take her down and furious, contacts Elizabeth (though he is unaware of who she really is).  Infuriated at being nearly taken down, he demands that he be released from working for the KGB in exchange for Lucia's life.  Elizabeth makes the on-sight decision to agree to his terms on condition that Larrick get them into Martial Eagle, then he will be left alone forever.  It looks like a done deal, but Lucia, when untied, becomes unhinged and takes another stab at trying to avenge her countrymen.  Holding her in a chokehold, Larrick tells Elizabeth, her life or his.   Elizabeth cannot shoot at either of them, and allows Larrick to strangle Lucia.  With that, he is done with betraying his country for the security of the closet.

Philip, for his part, is shocked, saddened, horrified, and even angered to discover that the secret naval plans he and Elizabeth stole were fakes planted by the Americans, and that 160 Soviet sailors died when the submarine using the parts sank.  For their part, Oleg (Costa Ronin), the Rezidentura's science & technology advisor, blames not just the Americans but the Soviets for rushing the project rather than test it slowly, arguing that the Soviet ineptness and rush to catch up with the Yanks was equally at fault.

Elizabeth and Philip find that the septic clearing workers are the best way to enter the camp, and they take one of the septic truck drivers, Lewis (Graham Winton), pressing him for information.  He gives them what they need, but now the Jennings disagree on what to do with Lewis.  Elizabeth wants to kill him, but Philip refuses, insisting that they should leave him in the forest, tied up, and that he won't talk or be found.

On a surprisingly lighter note, Henry was caught by the neighbors in their home, asleep after too many video games.  They won't press charges seeing as nothing was stolen, but Elizabeth and Henry are naturally upset about all this.   This incident couldn't have come at a worse time for them.  Philip is still finding himself wracked with guilt about the sailors, and Elizabeth is haunted by Lucia's death even if it was necessary.  A distraught Henry pleads that he is a good person, and that he knows the difference between right and wrong.  Crying uncontrollably, he keeps telling his parents he is a good person, breaking down to his parents. 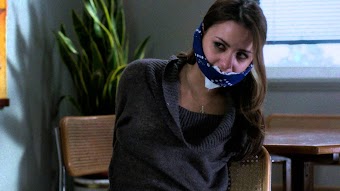 Perhaps this is why I found New Car, while still a fantastic The Americans episode, a little much.  I get the idea that Henry's innocent tears for the rather innocuous crime he's committed are also metaphorically the tears Philip and Elizabeth cannot shed for themselves.  They are also 'good people', but people who do terrible things or allow terrible things to be done.  Elizabeth cannot shed tears for Lucia, for she is built of stronger stuff and has devoted herself to the mission.  However, she also knows that Lucia is dead because she would not stop Larrick, and she now has the accusatory eyes of Lucia forever on her.

Russell's performance throughout was so brilliant, particularly when she has to let Lucia die.  She has to remain quiet as her protégé's life ebbs away, unable to stop her death thanks to the necessity to keep Larrick alive.  When she tells Philip that she was there, we can see that for once she finds it hard.

Philip, the more gentle of the two, is equally tormented by the deaths he's caused, and in this case, it comes in the form of the dead sailors.  He without fault of his own, killed the sailors, and it was through technology.  That car of which he is so proud of, which brought him great joy, is now a symbol of the Americans' abilities which when used for war can kill.   Coupled with the recent death of the poor student earlier, it is understandable that Philip for once opts for mercy.

It is the same motivation that caused 'Clark' not to play a doctored tape to his wife Martha (Alison Wright) that appeared to make it sound like her superiors were calling her ugly.  Originally a method of continuing the con on Martha, who was wavering about serving as informant, she changed her mind but 'Clark' couldn't bring himself to play the tape just yet.

Rhys too is excellent as Philip, who finds that things are becoming too much for him, the struggle between the joys of America and the promise of the Soviet Union becoming harder.  We see this when Philip and Elizabeth discuss whether or not they enjoy the things America has to offer.  Philip points out that Elizabeth doesn't shy away from luxurious shoes.  She won't have any of it.

One almost feels for Elizabeth.  She sees a woman killed due to her silence.  Her son breaks into homes.  She is having a really bad day.

New Car is one about guilt: whether it is the guilt of a child who does a bad thing, or two good people doing terrible things.  Tragedy all around.

Next Episode: Martial Eagle
Posted by Rick at 7:39 PM