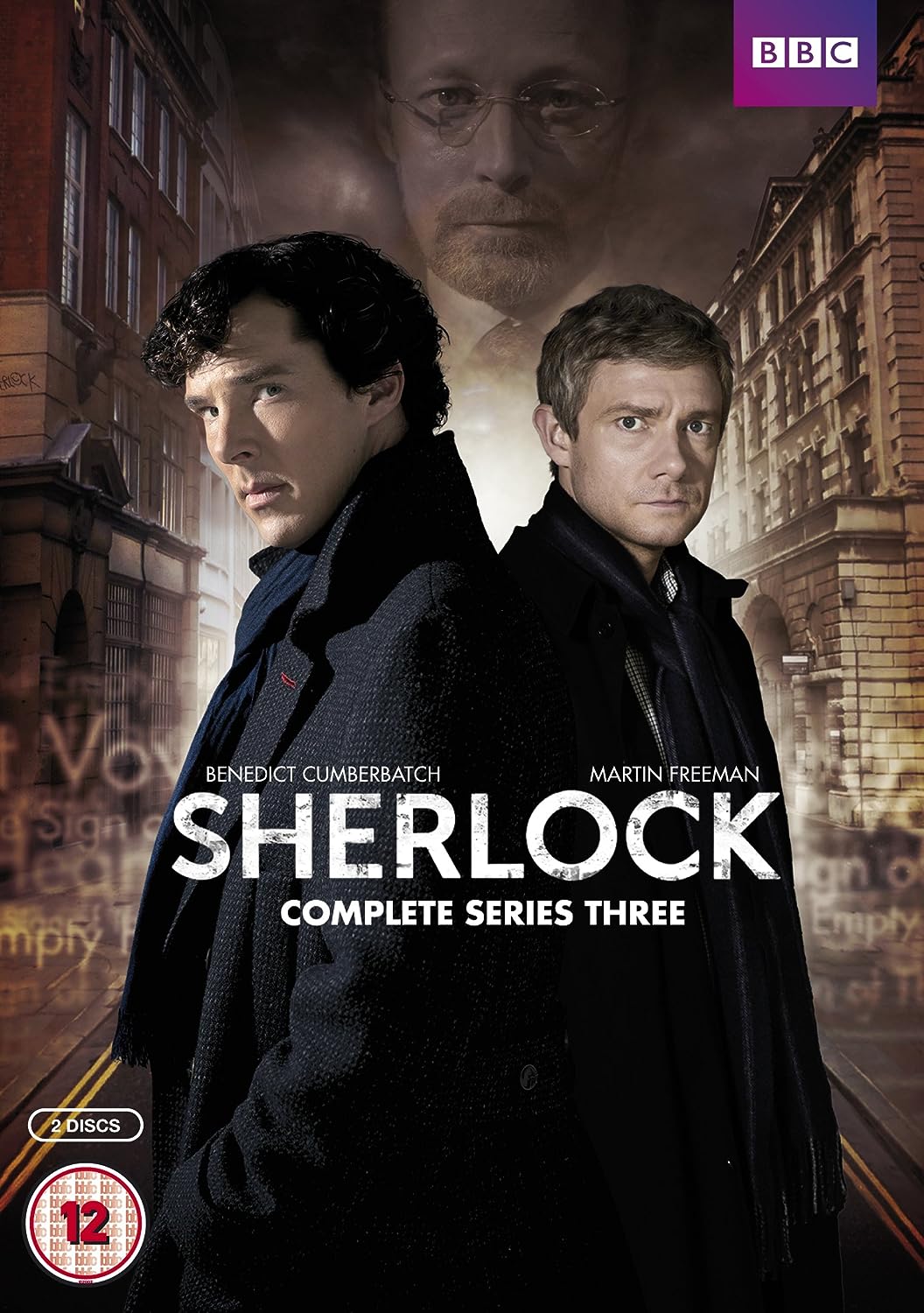 Somewhere along the line, Sherlock, a show that is hailed by Sherlockians and critics as this brilliant work of intellectual television, slipped into fantasy and farce.  The three episodes of the third season (The Empty Hearse, The Sign of Three, and His Final Vow) were uneven and in some case so wildly outlandish that only the most fierce Sherlockian would hold them as 'the Citizen Kane of television'.

The same Sherlockians, mind you, that don't read Canon and don't care to read Canon because it 'can't be as good as Sherlock'.

This is not to say that there were not good things, even great things, in Sherlock Season Three.  However, as I see it, at a certain point one's mind has to say we cannot accept the premise we are presented.  Sherlock has strong acting, some sharp moments, but simply goes from a show based on its own reality to something too unbelievable even within its world.

First, a brief recap of the episodes.

For a television series that is highly praised and has won various Emmy Awards, it was slightly below average.

Now, let us look briefly at what I did and did not like about Sherlock Season Three.

My biggest complaint is that both the first and last episode really didn't make sense.  For about a year if not more we were teased about The Empty Hearse, how all the questions would be answered and all of it would make sense.  Steven Moffat, Sherlock co-creator and writer, insisted that 'there was a clue that everyone missed' regarding Sherlock's faked death.  Now, while I personally think that it is arrogance to suggest that everyone watching The Reichenbach Fall missed an important clue I also in retrospect find that answers were not given.

Yes, throughout The Empty Hearse we got various treatments as to how it could be done, but when we get to Sherlock's own explanation, Anderson could quickly puncture holes in the official story.  Of course, Sherlock has the luxury of walking away and leaving the questions unanswered, but we the audience can only be left to wonder how he did it.  Fortunately for Sherlock, the Sherlockians for the most part have the same mindset of Dr. John Watson (Martin Freeman): I don't care HOW you did it, I only care WHY.  In other words, they don't care about answers, only emotion.

This to me is very strange given that Sherlock Holmes is suppose to be about intellect, not emotion.

For me, the reason I so detested The Empty Hearse was because it wanted me to accept something my mind couldn't for the flimsiest of reasons: that the resolution to an impossible situation would not come because I only needed to 'feel', not 'think'. Similarly, His Final Vow made no sense, and really undercut the genius Sherlock Holmes is suppose to be.  Holmes' entire reputation is built on the idea that just by the way you breathe, he can find out what kind of pornography you prefer.  Yet, in the months and months that he was next to Mary Morstan Watson (Amanda Abbington, Freeman's real-life mistress), not once did he ever figure out she was a master assassin.  Seriously, what are the odds?  Not just the odds of John Watson finding THAT particular woman to fall in love with, but her being a special agent?  I understand the need for a big twist, especially on a program that has three episodes (rather, feature-length films) per season.

However,  why did we have to go there?  Why have Mary turn into Jane Bond 00-0?  Why did we need such a bad and I think nonsensical twist?  If that wasn't bad enough, the teasing of a return for Jim Moriarty (who shot himself in the mouth, mind you), is one too many things that have turned Sherlock into The Resurrection Show (where no one dies).

To me, all these 'twists', all these odd moments, take away from the pleasure of the show.  It's as if we cannot trust the audience to follow our characters without turning something into fantasy.

Mary as CIA.
Moriarty returned from the grave.
Sherlock not giving an answer to how he did it (or stubbornly having so much ambiguity about it).
Sherlock uncharacteristically playing a bizarre practical joke on his 'best friend'.

As much grief as Elementary gets from Sherlockians who detest it as a knockoff, and as much division among Holmesians on combining the characters of Irene Adler and Moriarty into one, at least they had the good sense of not killing her off.  Even if they did, they would have to provide a rational way of explaining a return, apart from 'we're not going to tell you'. 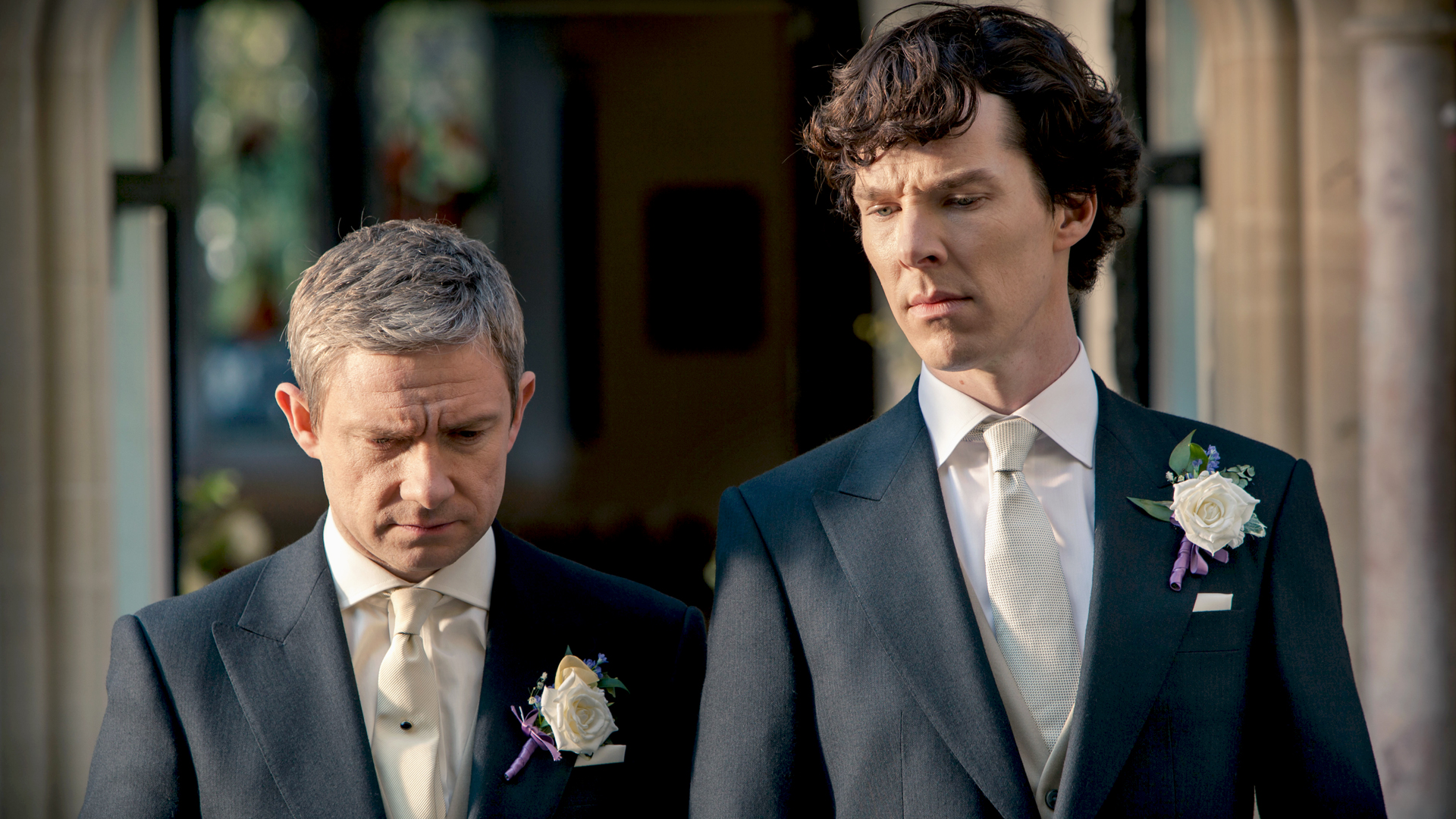 It was only the second story, The Sign of Three, that was worth anything.  No, the mystery to me wasn't all that interesting, primarily just name-dropping from The Sign of Four from Canon.  However, it was the quiet moments, like in Sherlock's genuine confusion about Watson asking him to be his best man (I leave it up to the reader as to why Watson, a man whose been emotionally and physically tortured as a result of Sherlock, would consider him his best friend).  We have Sherlock's acknowledgment of his weaknesses during his long and rambling toast, and even Sherlock's confession that he loves dancing.

THOSE moments, when we got to see past the masks, got to see Cumberbatch and Freeman and Abbington drop their Sherlock personas and reveal through their performances real characters, real people, that were the best parts of The Sign of Three.  I got the pathos of Sherlock Holmes keeping up his persona by not letting himself go and enjoy the wedding dance.  We just learned that he secretly enjoys dancing, and after playing a violin piece in honor of his friend and his new wife, when the techno music begins playing, rather than cut the rug he opts to slip quietly away, from all the happiness of being ordinary, rather than the highly-functioning sociopath he is (or claims to be).

I get that in many ways, not only can he not be part of that world, but that he chooses not to be, that something within him keeps him at arm's length from the joy of the ordinary.  These were the moments I remember and which, if we had more of, I might genuinely think well of the show.

As it stands, it is too fond of being clever to be good.  More's the pity, given that if Sherlock stopped trying to be 'brilliant' and opted to be 'good', it might achieve that greatness is so nakedly demands I proclaim it to having.

As it is, after nine episodes, I can't find my way to embracing Sherlock and am still puzzled as to why people insist it is one of if not the greatest version of Canon adaptations ever made.


Next Episode: The Abominable Bride
Posted by Rick at 1:34 AM