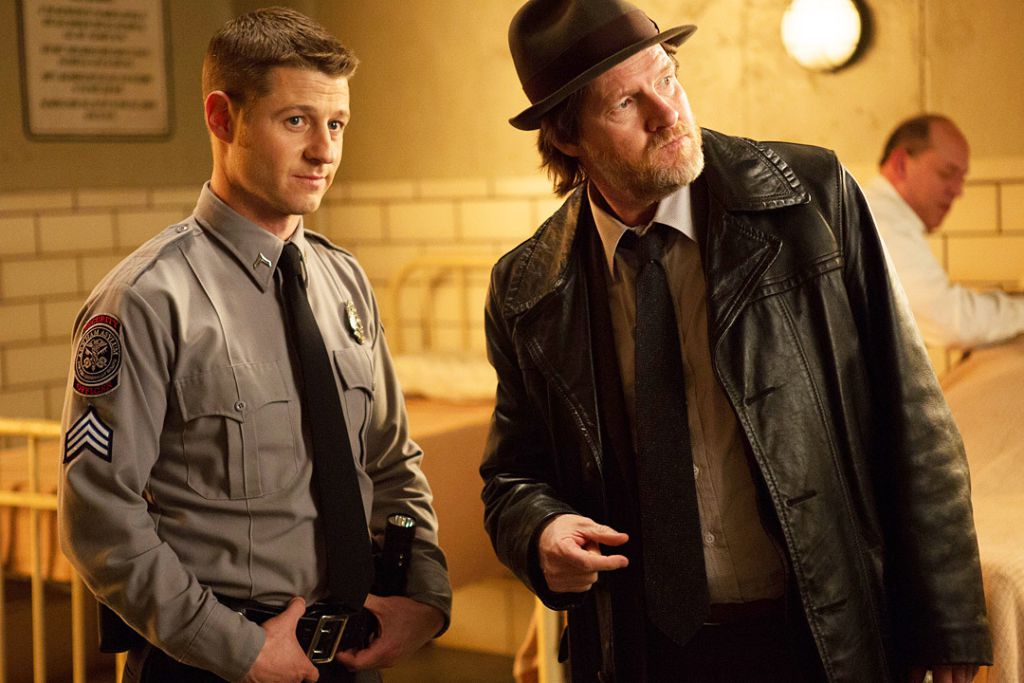 Sometimes you have to hit bottom before rising to the top.  These words of wisdom should come as bitter truths to both Detective James Gordon (Ben McKenzie) and Oswald Cobblepot aka The Penguin (Robin Lord Taylor) in Rogues' Gallery, the latest Gotham episode, for both Gordon and Cobblepot have seen better days.  Truth be told, Gotham itself has seen better days, as Rogues' Gallery, while not the worst episode I've seen, is perhaps the weakest episode I've seen, slightly disjointed, short-changing a lot of characters, and taking the unusual step of making this essentially a multi-arc or at least two-part story.

Gordon is stuck in Arkham Asylum as punishment, but still trouble finds him.  A prisoner has been experimented on, leaving him alive but virtually brain-dead.  The director of Arkham, Dr. Lang (Isiah Whitlock, Jr.) is quick to blame Gordon for everything that's gone wrong, but Gordon finds an ally in Dr. Leslie Thompkins (Morena Baccarin), who normally works in the women's wing but sometimes comes when they are short-staffed.   That pretty much should be every day, as Arkham was opened in a rush and a panic and there isn't enough staff to secure and maintain services.  Lang puts Gordon to investigate who fried Frogman's brain, and that means interviewing the inmates with the help of Nurse Dorothy Duncan (Allyce Beasley).  Among those investigated is the unnaturally calm Jack Gruber (Christopher Heyerdahl), whose adaptation of Shakespeare was interrupted by an inmate that caused the riot that started the whole thing, and Aaron (Kevin McCormick), a very nice, honest ax murderer whom Duncan informs Gordon doesn't lie.

Soon other inmates start getting fried, and Gordon suspects that it might be staff doing this, much to Lang's displeasure.  Over Lang's fierce objection, Gordon calls the police, bringing his former partner Harvey Bullock (Donal Logue) into the picture.  Bullock and Gordon, despite themselves, are thrilled to see each other, and while Bullock takes Lang for questioning, Gordon continues with Dr. Thompkins to investigate.  In the end, we find that Gordon is right...and wrong, about who is causing these mad science experiments.

In other plots, Selina Kyle (Camren Bicondova) takes fellow street urchin Ivy Pepper (Claire Foley) to crash at Gordon's, knowing no one's there.  Barbara (Erin Richards) breaks up with Montoya (Victoria Cartagena) but when Ivy answers, Barbara being Barbara freaks out.  Fish Mooney (Jada Pinkett Smith) is still plotting to take someone down, but two other lieutenants in Falcone's family, Sabiano (John Enos III) and Jonachek (Anthony Grasso) aren't too hot on Mooney being the next Don.  Sabiano in particular is annoyed, given he should be the next in line by seniority.  As it happens, Sabiano is old friends with Mooney's right-hand man Butch (Drew Powell), and he agrees to be intermediary.  Sabiano asks Butch to switch sides, and after some debate, Butch agrees...then shoots Sabiano.  Oh, and Oswald, who now seems to have embraced The Penguin name, attempts to shake down fishermen who've already paid Don Maroni (David Zayas) and gets promptly arrested.  At the end, Maroni bails him out after telling Penguin he put Oswald in jail as a lesson about hubris.

Rogues' Gallery goes all over the place, leaving what appears to be a lot of story threads to be picked up bit by bit.  Take the Penguin's story.  We see it precisely at the beginning, near the middle, and the end, but truth be told it could have been cut out completely and not affected the episode at all.  Worse, relegating Robin Lord Taylor, who is the breakout star of Gotham, to a mere bit player is a poor decision.  A whole episode could be made out of Penguin's predicament, and might have been better if the episode was split evenly between the two.

Certainly the highlight of Rogues' Gallery wasn't anything going on in Gotham (apart from the visuals, but more on that later).  Instead, it was the exchange between RLT's Penguin and Logue's Bullock as the latter taunts the former.  Seeing Penguin in lockup, Bullock tells him, is soothing, like a bonsai tree.  That in itself displays Bullock to be less a corrupt cop and more a cynical one.  When Penguin's aide asks, "What's a bonsai tree?", RLT's reaction of frustration, irritation, and desperation of his intellect and his henchman's ignorance lends a bit of comedy to the proceedings without being overt.

Actually, Logue was perhaps the best thing in Rogues' Gallery, and I say this as someone who isn't fond of Logue in general (but I'm warming up to him).  From when he sees Gordon again and delights in mocking Dr. Lang to the questioning of Lang at the precinct, Logue dominates whenever he is on screen.

Another highlight was the subplot of Mooney making her first bid to topple Falcone.  JPS is still a bit camp, but again I'm someone who doesn't mind that isn't complaining.  One thing that I was confused about was this exchange between her and Butch.

"Sabiano is the problem.  Now on his own, Jonachek I can turn him around.  And the junior capos will follow him.  But that Sabiano, we gotta deal with him before we make a move on Maroni" (emphasis mine).

I played and replayed the scene, and she said "Maroni".  I don't understand what she is talking about.  Why would she make a move against Maroni?  Doesn't she mean Falcone?  Could she be plotting a bigger game and let it slip?  Could it have been a script error where JPS read or spoke the wrong mobster's name? If so, was there no script editor to notice this, or did the director merely fail to realize she had said "Maroni" instead of "Falcone" (whom she is plotting to topple)? 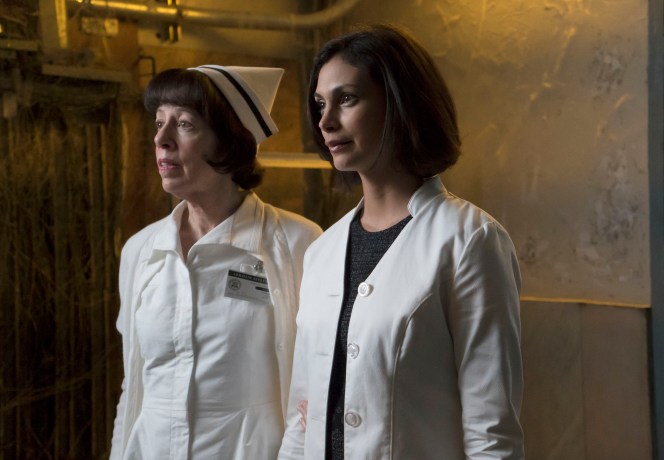 Now the mobster subplot had one of the better moments.  The use of oldies like It's All in The Game lent the scenes with Butch and Sabiano lent Rogues' Gallery a Goodfellas-type feel, like we were watching a Martin Scorsese film.  We also had a somewhat Saw feel to when another inmate is experimented on, with the visuals and editing extremely well-done.

While Baccarin's Dr. Thompkins doesn't have much to do, I'll cut her some slack in that this is her introduction (weak as it was).  Beasley was quite amusing as Nurse Dorothy, though she brought to mind what my mother, a former nurse, always says about how they are seen in media.  Apart from complaining about how CPR is performed on television (they'd break the person's ribs doing it that way, she always sniffs), her pet peeve is always "We don't wear the hats".  OK Mom, nurses don't wear the hats...but they look nice.

Of course, the fact that Nurse Duncan wears the hat should have tipped me off right away...

The villain of the week, Gruber, is strong as the evil mad genius, who was fully aware of his wickedness, and it looks like he will return to be a foil in future episodes.  Whitlock was strong with Logue but I think pretty weak everywhere else because all he did was growl at Gordon.

However, other aspects went wrong or underused.  In the latter, it is Ivy and Selina, who were basically just there, with little to add.  In the former, poor Barbara.  Has there ever been a character who both Gothamites and Gotham haters agree on in their total dislike for?  Whether it's Richards herself or the role, both appear annoying and stupid and it's a shame Jim will eventually marry her.  I only hope she shapes up soon.

Thanks to Logue and Drew Powell as Butch, Rogues' Gallery wasn't terrible.  I'm giving the episode some room because I figure this is the opening to a larger story and we had to put in the groundwork.  However, on the whole there were too many things going on at once where a lot got shortchanged.  Hopefully Gotham will return to a stronger, sharper focus now that The Electrocutioner is coming...

Next Episode: What the Little Bird Told Him
Posted by Rick at 12:30 PM