The Americans: Behind The Red Door Review 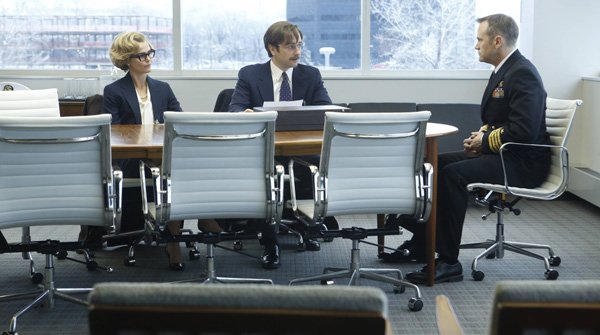 THE AMERICANS:
BEHIND THE RED DOOR

And When Spies Get Behind Closed Doors...

The Americans has given us violent moments, but in Behind the Red Door, we see violence not in a physical sense, but an emotional one.  On a certain level, almost all the characters are tortured or torturing themselves, and work is no respite for what haunts them.

Philip and Elizabeth Jennings (Matthew Rhys and Keri Russell) have been tasked by Claudia (Margo Martindale) to kill Navy Captain Larrick (Lee Tergesen) should they confirm that he killed another KGB pair, Emmett and Leann.  They were blackmailing Larrick because he is homosexual, which at the time could have gotten him dishonorably discharged from the military.  Masquerading as CIA agents, they confront Larrick but he doesn't crack.  He didn't kill his Soviet handlers, he says (although he admits he wanted to and was close to finding out where they lived to do it).  He also mentions a "Martial Eagle", and the Jennings suspect this is big news.   Their new handler Kate (Wrenn Schmidt) tells them that Martial Eagle is a secret training program for Nicaraguan counter-revolutionaries (soon to be known as the Contras), and the Jennings are tasked with assassinating their field commanders and exposing the camp.

FBI agent Stan Beeman (Noah Emmerich), however, has problems of his own to really concern himself with either his neighbors the Jennings or with the new Tomato Tango red door his wife put in their home.  KGB operative Oleg (Costa Ronin) now puts the squeeze on Beeman, asking for the FBI surveillance logs of himself in three days, or Nina (Annet Mahendru), Beeman's mole/mistress, will be exposed.  If something should happen to Oleg, what he knows will be revealed.  Beeman tries to get advise from his boss/friend Agent Gaad (Richard Thomas), but the wily department head tells him he can't know much due to his upcoming closed-door Congressional testimony about Beeman's involvement with another situation (the killing of Vlad from the Embassy), and that perhaps he, not Nina, is over his head. 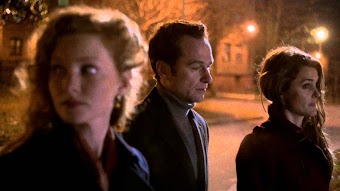 To find out more about Martial Eagle, Elizabeth uses her true believing Nicaraguan agent Lucia (Aimee Carrero) to use her relationship with a Congressional aide, Carl (Nick Bailey).  Lucia is convinced she can kill Carl without any emotional difficulties, but as Carl's life drains away after shooting up some heroin mixed with poison, she finds it isn't as easy as her Marxist ideology suggested.  Nina, for her part, is furious when Beeman tells her she has to take a polygraph test to be exfiltrated.  Elizabeth, for her part, has been pushing Philip to be the animalistic Clark she's heard about, but when he goes at it, it leaves her sobbing and Philip a wreck.

Outside a gay bar where Larrick was having a quickie Philip comes upon him but Larrick is too fast, telling him he figured Philip wasn't CIA.  Elizabeth learns why Claudia has been so anxious about the investigation.  A careless whisper with someone she was romantically involved with might have inadvertently exposed Emmett and Leann, and Claudia is racked with guilt and fear about not just that, but about potentially putting the entire Jennings family in danger.

Behind the Red Door is an especially strong episode in a series that continues to astound in its complex portrayals of people leading dual lives.  There was some strong spy work to be sure (the investigation of what Martial Eagle is), but for the most part Behind the Red Door was about what happens when people drop their masks and reveal more than even they may realize.

The best example of this is with Philip and Elizabeth.  She has been pushing her gentle husband to be someone he hasn't been, more aggressive, even dangerous.  Elizabeth even goes so far as to ask him to keep the Clark glasses and hair.  When she pushes him too far, his shocking sex act feels almost like a rape, if not a physical one at least an emotional one.  Elizabeth, far from finding physical pleasure, realizes that it is a terrifying and tormenting moment, and Philip too is shaken at how he is when he is thoroughly unleashed.  As he rips the wig off and stares at his reflection, you can see the shock and horror as to who he is now, and perhaps sense that even he doesn't know who he really is.

It's a credit to Rhys and Russell's continuing good work on The Americans that we feel great sympathy for both of them, seeing them as a couple who are dangerous when they are not themselves.

Behind the Red Door also allows for Emmerich's Beeman to equally face the darkness within him.  Having fallen hard for Nina, he finds himself contemplating doing something against his core principles, and that realization leaves him untethered.  Fortunately, Beeman allows us a tiny bit of comedy or at least lightness when a befuddled Beeman faces early 1980s technology in the form of a computer that prints out the log records he needs.

It's almost quaint to see these massive machines and old-school printout sheets that back in the day were the most advanced technology, and we need that little respite given how intense the episode was.

Tergesen as Larrick similarly has his moment as the closeted Navy Captain.  His manner with 'the CIA' is brusque and blunt, and if he believes that the CIA knows he's gay he doesn't give anything away.  In fact, he seems more belligerent and tough with them.  He sheds no tears for his agents and is quite supportive of Reagan and his policies (which must have irked the Jennings more).  However, he too is hiding, and while he is not open about his sexual preference (and is reckless as the AIDS epidemic is dawning) Larrick doesn't fear the Jennings when his suspicions are confirmed.

Carrero and Martindale also are simply excellent as the other Soviet agents.  Despite all her talk, we see that Lucia finds both killing Carl and seeing him die is quite difficult.  Claudia, for her part, allows a more worried and regretful side to emerge.  "Blackmail, however, seldom leads to a happy conclusion," she advises Elizabeth when informed that the Jennings will continue putting the squeeze on Larrick.  The brilliance of Martindale's Granny is that despite it all, we truly don't know whether it is she, not Larrick, who is five steps ahead of them.  Even the really small parts, like Bailey's Carl, had moments of genuine sadness as we realize this young man will not live to see his mother, who is coming to Washington to meet her son's new girl.

One thing I haven't commented on is on the music, written by Nathan Barr.  The score for Behind the Red Door enhances the tension and sadness of all these characters who find they all are hiding, perhaps from themselves.

Emotional, intelligent, and moving, Behind the Red Door has really pushed The Americans to a higher plane, which given how good this show is overall is a remarkable feat indeed.

Next Episode: ARPANET
Posted by Rick at 2:17 PM