The Librarians: And the Heart of Darkness Review THE LIBRARIANS:
AND THE HEART OF DARKNESS

And the Heart of Darkness was a good mixture of spooky and serious with a hint of humor that balanced things out when it would get too creepy.

The Librarians: Jake Stone (Christian Kane), Ezekiel Jones (John Kim), and Cassandra Cillian (Lindy Booth), along with their Guardian, Eve Baird (Rebecca Romijn), come across a frightened young girl in Slovakia.  Katie Bender (Lea Zawada) is covered in blood, and running to see help.  Up in a house, she and three of her friends were staying as they hiked across the Continent, and they are all in mortal danger.  Eve takes Jake and Ezekiel up to the house, while leaving Cassandra to watch Kate.  Cassandra is extremely displeased at being left behind, almost to being a nanny because in Eve's eyes she can't be action-oriented.

Both Stone and Jones realize that the house is not normal: it's an American pioneer home in the middle of Slovakia, and too many things are going 'bump in the night'.  Jones is all for leaving the house, but like the guy in the movies as he says, no one listens to Ezekiel.  Jenkins (John Larroquette) tells them that there are six houses which they might have stumbled into, picking the Shadow Box as the most likely candidate.  These are the original 'haunted houses', and it is always dangerous.  They have to find and destroy the dark force behind it by midnight or be killed or trapped inside (much to Jones and Stone's irritation, who wonder why it always has to be midnight). 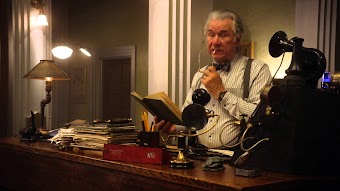 The house is full of foreboding and danger, and one by one the Librarians save Cassandra get trapped in what appears to be a dollhouse.  Jones is pretty stoked about being there, for the dollhouse grants wishes, but Stone and Eve are desperate to get out.  They also observe a series of photographs that serve as a clue.  Cassandra, who is with Katie, soon discovers that Katie literally came with the house.  She is part of the machinations, for Katie wishes to be the Angel of Death.  Cassandra, for her part, wishes to save her friends.  It's a battle to see who will win out, and Cassandra ends up saying the day.   The house, Cassandra informs the others, is really The House of Refuge, which is there to grant wishes.  The Bloody Benders, a group of serial killers who disappeared from history, had wandered into the house long ago, and with Katie's wish to be a master murderess, the house did as it was told.  Now, it was free to be the pleasant shelter it was always meant to be.

And the Heart of Darkness is a bit more gruesome that most Librarians episodes, dealing with traditional horror elements (a shadowy figure throwing axes around, creepy children songs playing on an old-style phonograph bringing up memories of something like Insidious).  However, the episode balances the more creepy elements with a certain strong level of humor.  Jones appears almost innocent when he tells Stone that the house they're in might be the Star Trek transporter or even the TARDIS.  He's still mostly a self-centered figure, but in his delivery of how he could believe things like Star Trek or Doctor Who to be real is hilarious.  Kim even has a great moment with Kane during his monologue about taking advantage of the house, when he tells Stone he could ask for 'whomever backwoods country people' think are hot.

It's also good to have the issue of how Eve sees Cassandra addressed.  It might be that because Cassandra is a woman and not trained to fight like either Jake or Ezekiel and is generally gentle, Eve may think she isn't strong enough in any way to tackle dangers.  However, Booth proved to be both strong and intelligent and brave in how she handled the situation and Katie in particular.  The twist of having Katie be evil isn't a big twist.  The twist of having her be part of the Bloody Benders was.  The twist of the haunted house be really the House of Refuge puts the best twist on the story itself.

As the guest star, Zawada was excellent, having to play a sympathetic and villainous character within a short span.  Again, it wasn't a big twist to know Katie was the one behind the mayhem, but Zawada played both parts extremely well without overdoing either.

We also got light moments in the episode, thanks to the always reliable Larroquette, who is so fun with his at-times clueless Jenkins.  He is perfectly willing to go through a catalogue of homes without being aware that the group is in danger, only to be cut off by Eve, who snaps, "I don't need the real estate ad from Hell".

It's nice to see the cast of The Librarians work so well together and keep things exciting and entertaining without being too frightening.  The fact we have a happy ending makes And the Heart of Darkness not as light as previous episodes, but still a good one.

Next Episode: And the City of Light
Posted by Rick at 9:15 AM