Peter and Jared Spear The Catch of The Day...

It's interesting that Jared Franklin and Peter Bash once started out as remarkably competent lawyers given that by the end of the series, they had to resort to dumb stunts and almost magical solutions to get out of things.   Big Fish shows that when the characters were allowed to have semi-functioning brains, Franklin & Bash could be both irreverent and reasonable.  Would that the show kept that going rather than insist it was the lead's combined stupidity rather than their friendship that was the big draw.

Jared Franklin (Breckin Meyer) and Peter Bash (Mark-Paul Gosselaar) are put on retainer by Carter Lang (Jason Alexander).  Lang is a crooked businessman (aren't they all): a Madoff-type who has bilked investors of millions.  He learns he's dying and wants to do some restitution.  His idea of restitution however, is a bit criminal.  He takes his former protégé's boat and sells it.  He runs down the street naked and breaks into said protégé's home, which displeases said protégé, Johnny Stills (Patrick Fischler).  Then we get a big twist: Carter was misdiagnosed and he will live, perhaps a long time.  Now that Carter has a second chance, he decides he's going to keep the money, and since the boys are on retainer, they can't take him down.  Or can they?  There's the option of throwing the case against him, or perhaps they could do the rational thing and get Carter to trip himself up.

In the subplot, Hannah Linden (Garcelle Beauvais) and Damien Karp (Reed Diamond) are after a big fish of their own: eccentric billionaire Abha Jaya (Sarayu Rao).  The head of Mandolin Exports is perhaps genuinely insane, but she also is an Indian panphobic who doesn't like to touch people.  What a lovely coincidence that the firm just happens to have as a registered attorney...an Indian panphobic who doesn't like to touch people?  Enter Pindar Singh (Kumail Nanjiani), whom Hannah and Damien manipulate to get him to sympathize with them rather than Peter and Jared.  She's so impressed that she agrees to come to Los Angeles to meet Pindar, but to both their horrors a fight that Jared and Peter have had over Jared's toenail clippings is exposed in a particularly ugly way, causing her to flee in terror.  It looks like Jaya will not hire Infeld Daniels as her American solicitors, until with a little help from investigator Carmen (Dana Davis) and some fortune cookies Pindar manages to crash the farewell dinner/law firms pitch meeting and help them land their big fish. 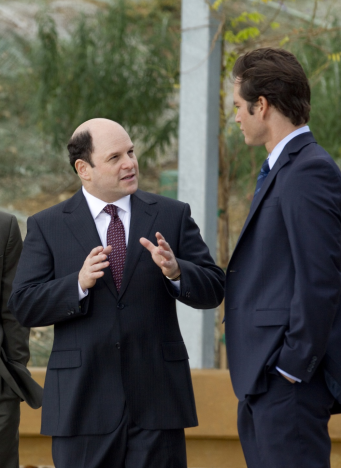 It's interesting that Big Fish managed to be clever, witty, and actually well-crafted.  I say 'interesting' only because here we have a glimpse of the show Kevin Falls and Bill Chais could have had, one that took the situations seriously but didn't take itself too seriously.  Here the two stories (Lang and Jaya) were balanced without overwhelming the other.  The resolutions to both cases were clever and most importantly, logical.  Carter is put on the stand by Jared and Peter and there he is basically railroaded with his previous statements to donate his ill-gotten money and his time to help in Haiti...or face perjury charges along with embezzlement.  The way to enter a meeting Pindar wasn't invited to was to slip in a legal pitch through fortune cookies where a highly-impressed Jaya could hear how the firm could help her.

We also  had some extremely clever double entendres popping up.  As part of the plot Stanton Infeld (Malcolm McDowell) the very eccentric head of the firm, suggests Peter should donate his bonus to Save the Children, but with some verbal wordplay and a bet involving darts Peter tricks Jared into donating HIS bonus instead (a rare case of PETER getting the upper hand).  When Peter compliments Jared on his 'warm hand', Jared replies, "I'll give YOU a warm hand", and here the somewhat obligatory 'we might be gay' bit didn't feel forced or dumb, but funny.  Peter gets a last laugh when he quips that Jared should like children...since he's the same size as one.

I also found the performances here quite effective. Guest star Rhea Seehorn as ADA Ellen Swatello gets some great riffs off Gosselaar.  Trying to cut her down to size after she mocks them, Peter says, "Sarcasm.  The poor man's wit".  Without missing a beat, Swatello cuts Bash down with a quip of her own.  "Did I just hear Janie practice her orgasms in Italian?", pointing out that the ADA Peter is in love with is about to marry someone else and go on an Italian honeymoon.  For once, Peter Bash is left speechless and dumbfounded.

Alexander has a great task to perform: play someone who starts out sympathetic and then turns nasty.  He was able to do so quite well and should be congratulated for pulling it off.  The regulars also did strong work, being serious when needed, funny likewise.  A particular highlight was Nanjiani and Rao's double act, where they had to work together without sharing the same set.  Pity that Rao never returned, for she would have been an interesting foil to Pindar's eccentricities.

About the only real complaint I have about Big Fish involves the toenail bit.  First, why would Jared cut his toenails in the bathroom sink?  That would be rather high to reach for someone Meyer's height.  However, when Peter collects the 'proof' in the form of a big collection of toenails glued to a post-it note on the refrigerator that spell out "PROOF", I couldn't believe that no one, especially Carmen or the almost psychotic Pindar, failed to notice this large bit on the refrigerator door.

Apart from that Big Fish was fun and witty, two things Franklin & Bash used to be, before their creators killed their darlings by making them morons with law degrees.  Nothing stinks more like rotting fish...expect Franklin & Bash post-Season One.

Next Episode: Franklin vs. Bash
Posted by Rick at 1:21 AM