The Librarians: And the Rule of Three Review

THE LIBRARIANS:
AND THE RULE OF THREE

And the Rule of Three is I think the best Librarians episode so far.  It has a wonderful combination of humor, adventure, and heart.  It also builds up a mystery that I'm sure will be integrated into future stories, as well as a guest star who I'm glad will be returning to be a foil to our intrepid investigators.

The Librarians: art expert Jake Stone (Christian Kane), mathematic genius Cassandra Cillian (Lindy Booth), and master thief Ezekiel Jones (John Kim) along with their Guardian Eve Laird (Rebecca Romijn) go to a STEM Fair (Science, Technology, Engineering, and Mathematics).  This is right up Cassandra's street, as she loves science fairs, and all the others go with varying degrees of enthusiasm.  The mistress of ceremonies, a Miss Lucinda McCabe, confuses the Librarians for judges from the County Library.  The Librarians save for Cassandra are a bit bored by all this, but also a bit puzzled.  The STEM Fair is suppose to have the most intricate science projects around, and there are some, like that of Amy Meyer (Bex Taylor-Klaus).  However, for something as intricate as STEM, there are also baking soda volcano exhibits.

Leonard (Maxwell Chase), creator of said exploding volcano (which somehow manages to have real lava) tells Jake and Eve (whom he has developed a bit of a crush on) that he wasn't even meant to be at this STEM Fair, but that those higher on the list kept having to drop out due to bizarre circumstances.  Jenkins (John Larroquette) suspects there's something odd in all this, and soon we find out what that is.  In this case, there literally is an app for it!

We find that what is suppose to be an app for brain games instead disguises a wish-fulfilment spell.  What all the participants and their stage parents want of course, is to win and defeat the other contestants.  These science students are playing with dangerous magic, which will bounce back to them in ever more dangerous ways, returned to them threefold to follow the rule of three.

The Librarians first believe that a trio of Goth-like students are behind this coven, but we soon find that the leader of this 'coven', Dashiell (Jacob Bean-Watson) really is a very sweet kid, whose only interest is in asking Amy to Prom with the help of his friends.  It didn't go well because Amy's mom (Amy Farrington) is putting too much pressure on Amy to win and keep winning.

The Librarians Stone and Cassandra take turns offering advise to our star-crossed lovers: Jake telling Dashiell that he shouldn't hide behind a costume as he did when Jake was Dashiell's age (hiding his love for Romantic poetry and art behind a jock exterior), and Cassandra telling Amy that science should not be a hindrance to living a teenage life (sharing how what had made her brilliant is also close to killing her, with her parents having thrown out all her trophies in a misguided effort to protect her).

Thanks to the spell on the app the students and parents have created an accidental supercoven, and in the middle of all this mayhem is none other than Miss McCabe, whom we discover is none other than Morgan LeFay (Alicia Witt), a powerful witch from Arthurian legend.  She prefers 'sorceress', as 'witch' has too much gender baggage.  Jenkins orders Eve to kill Morgan, who has wandered into the Annex, surprising all three of them.  However, Morgan manages to walk out unharmed, and addresses Jenkins in an oddly familiar tone, calling him Galeas.  It takes the work of all the Librarians to stop Morgan from unleashing the full force of the spell, with a little help from Amy (who never used the app herself, thus never had any magic come her way).  While everyone appears happy (such as Amy and Dashiell, who might have a future), Morgan escapes, angering Jenkins.  Eve then gives Jenkins the message Morgan gave her to give him, which translates from Latin to "Do not fear the villain.  Fear the hero."

What I really enjoyed about And the Power of Three was that it has wonderful moments of comedy, of action, and even of romance.  John Larroquette continues to be a simply great asset to The Librarians as the stuffy, fussy Jenkins, but now we get a new twist with his character.  Instead of being a plot exposition device, we are given strong hints as to a new and until now unsuspected identity.  A simple search for 'Galeas' will reveal who Jenkins really is (and by the time you read this, the season finale will have made that revelation official).  However, this doesn't take away from the fact that it's an interesting twist that appears to come out of nowhere.

It also doesn't take away from Larroquette's wonderful manner to Jenkins, one who is still a bit of a fuss-bucket.  He is now one of the best characters on the show.

We also have two wonderful moments with Kane and Booth as Stone and Cassandra respectively.  Kane's ability to roll off Keats' poetry is wonderful, as is his scene with Bean-Watson.  Here, we get to see Jake be almost a mentor to the lovestruck Goth teen, who is actually a very sweet and gentle boy rather than a frightening witch-figure.  In fact, one of the positive aspects of And the Power of Three is how the episode plays with conventions.  The Goth teen really being a sensitive soul (a touch emo I imagine), the roughneck who loves poetry and literature but felt compelled to hide it, the math genius who finds that her teen years were a bit lost and the teen who finds the pressure of perfection blocking a desire to be with her peers.  There is a great balance between Jake, Cassandra, and those two kids whom they see as being younger versions of themselves.

These quiet moments are a highlight of And the Power of Three, giving us a really heartwarming set and a chance to show a gentle, mentoring side to Jake and Cassandra.  We even get a nice moment when John Kim's Ezekiel Jones gives Cassandra the STEM Trophy for saving everyone's lives.  Granted, how he came to it is best left unasked, but it's a nice moment between characters.

It's clear that Witt will return as Morgan LeFay, and I for one am looking forward to it, as she was excellent as the sorceress.  She was wicked but shrewd, calm and aware of her own power.  She was never over-the-top evil but was not sympathetic either, keeping a strong balance between wicked and smart.

And the Power of Three had wonderful moments of comedy in spoofing STEM Fairs (which at the library we do deal with, sometimes having to tailor programs to fit into STEM, and as a digression, I like when real-life is brought into fantasy shows, making it more realistic...or as realistic as something like The Librarians can get).  We also have a great moment with Witt, Romijn, and Larroquette when they face each other.  "Oh, you're a Guardian," she tells Eve.  "In that case, I'll try to talk slower".  Romijn's reaction is wonderful.  We also get a great moment when we find whom the Librarians chose as the fair's winner (here's a hint: think 'mountains').

A strong mixture of heart, humor, wit and Witt pushes And the Power of Three into being a fun, exciting, and pleasant experience, with hints about the upcoming season finale and new storylines coming.  Another delightful episode of The Librarians.

Here's hoping we get invited to the Dashiell-Amy wedding... 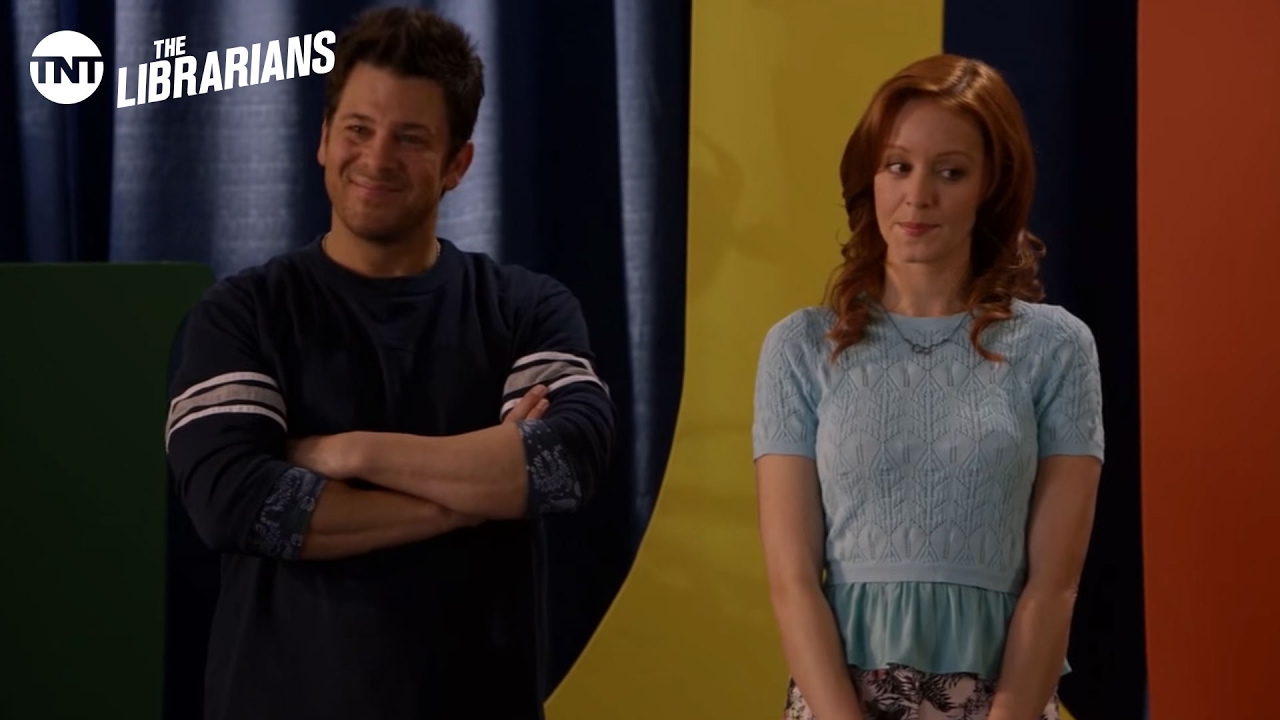 Next Episode: And the Heart of Darkness