Franklin & Bash: You Can't Take It With You Review

FRANKLIN & BASH:
YOU CAN'T TAKE IT WITH YOU

I remember the famous moment in baseball history when even someone not as well-versed in America's pastime as I got into the emotion of the game.  Jake Lemmerman's walk-off grand slam is one of those moments.

Picture it...El Paso, Texas, May 5, 2014.  Bottom of the ninth, two outs, two strikes, three balls, three men on plate, Sacramento River Cats 10, El Paso 9. Jake Lemmerman for the El Paso Baseball Team (NO, I won't use the name), has one swing left before it's all over, one way or another.  Sacramento relief pitcher Eric Scribner throws a curveball, and Lemmerman hits it to left field, sending it flying like a snow white dove over the fence!  Pandemonium on Cinco de Mayo and the stadium's collective roar shakes the Sun City all the way to New Mexico.  A walk-off grand slam home run that is a thing of beauty for all who were there.

As a fan of EP Baseball (though not the name), I have season tickets, and on this day, with my brother Gabe beside me, I witnessed something that I will remember for as long as I live.  I met Lemmerman at a Season Ticket Holder Meet-and-Greet, and while he was pleasant he didn't want to talk about the grand slam.  I just mentioned how awesome it was, and he just smiled sheeply and said thanks.

Now, I mention all this because to my surprise, Jared Franklin (Breckin Meyer) had a similar, though more spectacular baseball moment in his past.  The plot of You Can't Take It With You revolves around Kirk Gibson's still amazing and inspiring home run of the 1988 World Series.  The ball itself has disappeared from history.  Only the person who actually has or had the homerun ball knows its fate (though at this point, twenty-seven years after the fact, how to authenticate it I wonder).  In You Can't Take It With You, someone claims to have the ball, and a custody fight breaks out in the family as to what should happen to it: sell it, keep it, or donate it to the Baseball Hall of Fame.  Franklin claims to have witnessed this legendary feat, though like all things involving baseball, myth and fact may intermingle.

Jared is characteristically cocky regarding his chances of winning the case where Colin and Greg Morrow (Charlie Reed and Ian Reed Kessler) are suing their father Duncan (Robert Pine) for ownership of the ball, claiming an oral contract immediately after the game gave them ownership.  Duncan and his daughter Ellen (Nicole Steinwedell) will not surrender the ball.  Jared's partner Peter Bash (Mark-Paul Gosselaar) warns him of Buffalo, where Jared's arrogance at the State Academic Decathlon made his school lose because he answered 'Buffalo' as the capital of New York State. 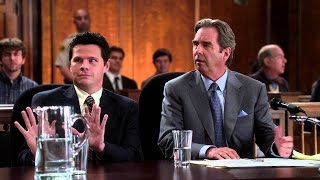 Things get complicated when Jared's father, legendary attorney Leonard Franklin (Beau Bridges) is hired by the Morrow Brothers.  This puts Jared off his A-Game, and shows him to be no match for Daddy Dearest.  Jared in court shows he's terribly inept, and at every turn Leonard shows how much better he is.  Even after Duncan drops dead of a heart attack in the middle of the case, Leonard uses his son's off-hand comments about 'spending time with the ball' to eventually have Jared arrested.

It looks bleak for Jared, especially after the court agrees to have Duncan exhumed when it's discovered he was buried with the ball.  However, Duncan has one final trick up his sleeve: a note he placed alongside the ball "to be opened in the event some bastard digs me up".  Jared cheerfully hands the envelope over to his dad.  In the judge's chambers, the envelope is opened and we find Duncan left specific instructions: anyone involved in exhuming his corpse was automatically disinherited, and the ball to be given to whoever wasn't involved or to the Baseball Hall of Fame should that person not be alive.

We also learn that while Jared was at the game and was ten at the time (making him 33 at the time this story takes place, shaving four years off Meyer's real age of 37 when the episode premiered), his father made him leave after the 7th Inning Stretch so that Leonard could go see his mistress.  Jared has never forgotten or forgiven Leonard for putting his own needs over those of his son.

In the subplot, we have Ronny Streppi (Tom Arnold), the star of a 'reality show' where he's earned the reputation of "Douchey Dad" due to his drunken antics.   He wants to get out of the contract but he can't, and his reputation and relationship with his kids is genuinely suffering.  Peter and co-chair Hannah Linden (Garcelle Beauvais) at first attempt to change Ronny's image, but then with a little ingenuity on Hannah's part, they manage to get Ronny out of his contract by a rather unpleasant method.  Fellow Infeld Daniels attorney Damien Karp (Reed Diamond) has problems of his own.  A videotape of him 'relaxing' to help him fall asleep during a sleep study has surfaced, and he asks Pindar Singh (Kumail Nanjiani) to help him remove it.  Pindar manages instead to e-mail it to all those on Karp's mailing list, including several judges.  Damien is enraged at Pindy's ineptness and now must suffer the consequences. 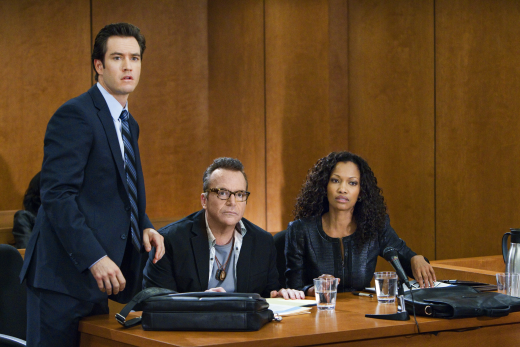 You Can't Take It With You has positives and negatives that show that Franklin & Bash could be good or bad depending on what road it took.  The good was that the storyline about fathers and sons was dominant. Jared & Leonard was the main one to where we can see that in his way Jared is both his father's son and not his father's son.  However, we also had the struggle of the Morrow family as the brothers fought with their father over someone of no value for them (apart from financial) but something of great value to Duncan and Ellen (his Cordelia, if you will).  We even have the story of Ronny, who wants to be seen as a good father rather than his nickname of 'Douchey Dad'.

There is some wit in this, and there is also great humor with Diamond and Nanjiani (who would have made a great double-act).  When asked how big Pindar's case is, he responds "surprisingly big", and when Pindy accidentally releases the 'non sex tape', he whines that just because he's Indian he's not a tech guy.  Diamond is excellent in his quiet fury at finding himself in this situation.  When he takes Pindar's laptop, smashing it to the ground, he retorts, "Well, it's off THAT one," before calmly but with shaking rage storming out.

Diamond in almost every Franklin & Bash episode has been so much better than everyone on the show.  My admiration for him as an actor grows and grows.

Guest star Bridges was effectively, almost gleefully evil as Leonard Franklin, his condescending manner with his son was something to watch.  The cinematography when Damien and Pindar are discussing their cloak-and-dagger business was also effective.  Even Meyer, someone I am no fan of, did well in working with the more emotional material while maintaining his cocky Breckin Meyer persona going.

However, You Can't Take it With You also has drawbacks, some hard to ignore.  The Morrow Brothers were too cartoonish to really prove their case in court. The resolution of the Ronny case is both too simple and I felt oddly cruel to the children (something about hearing a little girl basically called a whore or a future slut just was distasteful to me).  When Duncan has his heart attack, it is not established whether he died quickly or lingered.  Either way, how he managed to write his impromptu will is I think a subject of debate.

Finally, in trying to build up a big mystery between Leonard (or perhaps Lear) Franklin and Stanton Infeld (Malcolm McDowell) fell a bit flat.  I thought both were big-time lawyers, so why wouldn't they know each other?

You Can't Take It With You had the positive of a strong story, the negative of slipping into a more silly set of characters.  Balance, it should be remembered, is important in all things: legal cases, episodic television, and baseball.