Is it me, or do all Young Adult literary series share some similarities, such as being unnecessarily and extremely long, insisting that our characters live in dystopia, and be really, really dumb?  I'm no fan of The Hunger Games series, finding it puzzling that after 75 years of brutality from the Capital, a somewhat surly teenage girl is the lynchpin to revolution.  After watching Divergent, I find not only no desire to return to the series, but wondering why it has to be THREE books long (and four films, with the third part of the trilogy. Allegiant, like Hunger Games' Mockingjay, being broken up to two films) when the first story/film was not only dull but pretty much appears to have ended the story?

Chicago, the not-too-distant-future.  Society has been divided into five factions: Erudite (the intellectuals), Candor (the honest), Amity (the friendly farmers), Abnegation (the selfless) and Dauntless (the muscle).  There is another group, called Factionless, who are the homeless of Chicagoland, because they don't belong to a group.

Already all I keep thinking is, 'Veronica Roth, the series' author, is laying on the 'life as high school' metaphor really, really thick'.

Beatrice Prior (Shailene Woodley) is the daughter of Abnegation, who finds she doesn't fit in to her specific group.  Her brother Caleb (Ansel Elgort) appears to be a better fit for self-sacrifice.  For about one hundred years Abnegation, being the noble group that they are, have been in charge of the government for all this time.  However, there are stirrings of coups, with Erudite chomping at the bit to be the government.  At age 16, all citizens are given a test to see what group they will go to.  Beatrice's tests are...shockingly, inconclusive.  She is a divergent, one who fits more than one group.  This must be kept completely quiet, as all divergents are being exterminated with extreme prejudice.

In what I think is a bizarre turn, while all children are tested to see where they will fit in, they still get to choose what group they will go to (begging the question, if they get to choose, why test them in the first place?).  To the shock of their parents Natalie (Ashley Judd) and Andrew (Tony Goldwyn), Caleb chooses Erudite, and Beatrice chooses Dauntless.  Immediately they are thrown into training.  We skip Caleb's because book-learning should be rather boring, while jumping off trains and shooting things is more exciting.

New transfers include the now-rechristened Tris' new friend Christina (Zoe Kravitz), Will (Ben Lloyd-Hughes), Al (Christian Madsen), and Peter (Miles Teller).  They are trained by the enigmatic Four (Theo James) and Eric (Jai Courtney).  We get a lot of training where Tris shows improving skills, with some secret help from Four.  She also is facing great threats from inside and outside, with her divergent identity still haunting her.  Tris and Four stumble into a conspiracy involving Jeanine (Kate Winslet), an Erudite who plans on taking over the world.  She uses drugs to control Dauntless and use them as a private army to exterminate Abnegation, including killing her parents.  She and Four attempt to stop the controlled Dauntless, and it costs the lives of both her parents.  Fortunately, Caleb has turned against Erudite, and Four and Tris defeat Jeanine and take the A train to go outside the walls of Chicago.

Often during the screening of Divergent, I stopped the DVD to do other things: read, check my e-mail, bake a cake.  I did this to relive the boredom that Divergent was if nothing else, terribly terribly boring.  Must all dystopian worlds be so humorless?

One of my chief complaints about Divergent is that pesky question of logic.  Again, why test in the first place if you get to choose what group you want?

As a side note, Roth at the very least was inspired by The Giver, for the stories share similarities (our lead not 'fitting in' within their sealed-off world after a devastating war, a ceremony to select what group/duty each teen will be given for life, a rebellion of sorts against the system and desperate efforts by the leadership to keep things as they are for the population's own good of course).  With The Hunger Games, it shares a female lead, a warrior-type who is not a natural fighter but rises to the occasion to take on the dangerous leadership (President Snow or Erudite head Jeanine).

Then there is the 'factionless' group.  My goodness what a pathetic bunch.  So the deal is if you fail at the tests/training for a particular group, you are expelled from the group and not allowed to return to your original group (hence, 'factionless').  What I didn't understand is why didn't the 'factionless' themselves lead a revolution to take over or at least give the other factions endless trouble?  Are they that pathetic and hopeless.  Why would they be so willing to go along with things?  If by some odd chance you were born into Factionless, could you still test at all?

Again, what was up with the testing?  I didn't understand how one could possibly score 100 on any particular scale.  100 years would not be enough time to eliminate total honest from every human, or personal courage, or intellect, so by 'logic', every person should have shown traits of all factions and thus be 'divergent' in some way.  So, if one was a totally honest Dauntless-born, would you honestly fail to be totally honest with Candor and thus become 'factionless'?

Look, it isn't as if I don't understand what Roth was going for: some overt allegory of the high school experience where people divide themselves into cliques.  The fact I understand something, however, doesn't mean I have to say it makes sense in the world Roth created.  It doesn't.  I know that when you're a teen, you can feel as if being/not being in a particular group is the end of the world, but I simply couldn't accept the reality of this Chicagoland Dystopia thrown at me. 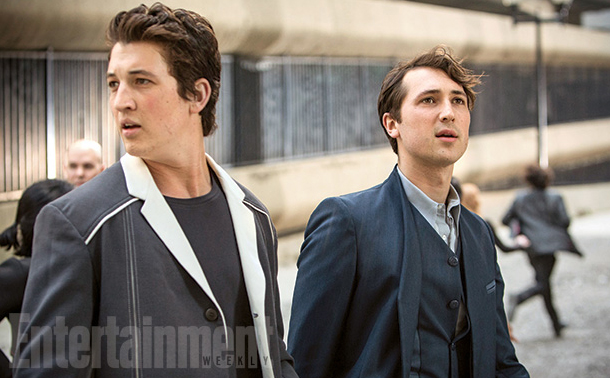 Even the sheer illogic to stupid plot, perhaps, I could go along with, if there was something of interest.  However, everyone in Divergent appears so bored or uninterested in the project.  It isn't as if at least on screen, some of them don't show how much contempt they have for the film that pays them thousands if not millions of dollars.  Miles Teller, someone I genuinely admire, does himself no favors in Divergent, being merely a quip-spouting machine in a kind of role and performance he could do in his sleep (and judging from the final project, might actually have been).  Elgort, someone I don't genuinely admire, didn't do badly as Caleb, but he too looked a bit bored with it all.

Same goes for Courtney's crabby Eric, one note short of one note as he just snapped at people everywhere.  James, someone who is physically correct as the romantic lead, similarly looks dead, showing no emotion either in the romance with Tris or when he has to train anyone.

The women fared slightly better, even if Judd had nothing to do but look fretful (Goldwyn being a black figure).  Woodley and Kravitz at least conveyed that Tris and Christina had a genuine friendship, and maybe if we'd have more focus on that we might have had a more interesting movie.  Winslet had to be a villain, and I figure she did well because it was pretty obvious she was a villain.

Finally, here is where I again wonder about all this.  Divergent ends with Tris and Four defeating Jeanine's wicked scheme and Jeanine running off.  Tris and Four, along with some others, jump the train that goes into the Great Unknown, but from my vantage point, they could have ended the series (let alone the book) with the villain being beaten and Tris and Four leading a new truly factionless world.  Why keep it going, seeing as how boring it was?

Seriously, we have to sit through three more movies like this?