The Fault in Our Stars: A Review 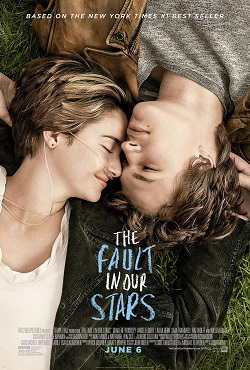 THE FAULT IN OUR STARS

Love in the Time of Leukemia...

It a curious thing, an aspect of The Fault in Our Stars.  If the screen adaptation is close to the original novel, we get this idea that John Green's Hazel is dismissive of teen-centered dramas where things end happily to a Peter Gabriel song.  I don't know why a.) a teenage girl would listen to Peter Gabriel (and it's no slam on Gabriel, since I love his music), and b.) Green thinks mocking one type of cliché is bad when his book gives us another (the 'wise-beyond-her-years teen girl who is so insightful about life and everything in it).  Most teenagers I know are neither quirky or deep thinkers, merely young.  The Fault in Our Stars is extremely popular with teens, and not having read the book I've no idea how close or far it strays from Green's novel.  However, the film is simultaneously smug and sleep-inducing, as two young people dying pepper us with a version of love that is one cancer patient short of Love Story.

Hazel Lancaster (Shailene Woodley) has cancer and she would rather face it in a 'realistic' manner.  This means not going to a support group, which her intellect is far above everyone, especially the group leader Patrick (Mike Birbiglia), who is in Hazel's words, a divorced man with half a testicle who is living on his parent's couch and sewing a large carpet with the literal Heart of Jesus carpet.  In other words, someone beneath her.

Into this world comes Augustus Gloop...I mean, Waters (Ansel Elgort), who comes to the support group as moral support to his friend Isaac (Nat Woolf), who is about to lose his second eye and become blind.  Augustus lost half his leg to cancer as well, but so far appears to be doing all right.  Immediately struck by her beauty, Augustus soon charms Hazel Grace (Augustus insists on using her first and middle name and perhaps only once or twice ever calls her just plain 'Hazel').  Hazel Grace soon becomes enraptured with the cocky, self-assured Augustus.  He in turn is also smitten, to where he will read her favorite novel, An Imperial Affliction, a somber tale of cancer that ends rather abruptly for her.  Being a guy (in other words, someone who loathes any hint of intellectualism), he finds An Imperial Affliction a tedious bore, but knowing that Hazel Grace loves the book (and even agreed to read his favorite book, an adaptation of his favorite video game), he goes the extra mile for her.

Hazel Grace has written hundreds of letters to An Imperial Affliction's reclusive author but never received a response.  With one e-mail (ONE, mind you), our uber-confident ex-jock has gotten not only a reply from the writer Peter Van Houten, but an invite to visit him in Amsterdam. At this point, I observed that I'm sure J.D. Salinger did things like this ALL the time to those kids who thought Catcher in the Rye explained everything about their lives and spoke to them and them alone.  Yet I digress.

Well, Augustus cashes in his 'wish' to go to Amsterdam, and part of that wish involves taking Hazel Grace and her mother Frannie (Laura Dern) to Amsterdam.  The kids get a free meal thanks to Van Houten (again, bet you Salinger coughed up money for his fans to dine at Tavern on the Green whenever they hit Manhattan), and meet the reclusive Van Houten (Willem Dafoe). Shock of shocks, he doesn't want to answer their questions about the book.  He won't even give them much of an audience, but Van Houten's assistant Lidewij (Lotte Verbeek) makes it up to them by taking them to the Anne Frank House.  There Hazel Grace finally admits that she loves Augustus, and later that night, despite her oxygen tank and his prosthetic leg, they lose their virginities to each other.

Good thing too, as Augustus tells Hazel Grace that his cancer has returned with a vengeance.  He is getting sicker and sicker, while she is still medically able to push her cancer away.  The boy who has no fear of oblivion faces just that, and the girl who believes we are all destined to be forgotten sees that being remembered by one person is enough to last them all their infinities.

Augustus dies, and to her anger Van Houten arrives for his funeral.  Isaac, now blind, tells her that the letter Van Houten gave her wasn't by the author, but from Augustus.  It was the eulogy he had written for her, which she had asked a long time ago.   Hazel Grace looks upon the stars and sees that their love is truly infinite and will outlast the stars themselves.

There is something, if not insidious, at least arrogant and condescending about The Fault in Our Stars.  John Green is someone I find I don't care for.  He may be a nice enough person, but if the book is like the movie, I imagine he has a grand opinion of himself and his insight into young people.  He may, given he's more successful than I in terms of book publication.  However, The Fault in Our Stars is a film I found dull, manipulative, and a little nonsensical.

I simply could not suspend disbelief long enough to accept that Van Houten, this Salinger-esque writer, would so quickly agree to meet or invite two kids out of nowhere.  It isn't mentioned that meeting Van Houten was part of Augustus' wish.  I thought it was merely to go to Amsterdam, and I think I'm right in thinking this way because there was no official from any wish-granting organization making any arrangements with Van Houten.

Here, I will grant the filmmakers a little leeway, seeing as I fell asleep during this 'great love story of our generation' (well, not MY generation, but that's another matter).

Even if I go with 'the assistant arranged all this', apart from it needing to happen because the plot requires it to, my question is 'why these two'?  I'm sure An Imperial Affliction affected hundreds if not thousands if not tens of thousands, hundreds of thousands, thousands of thousands, maybe even millions of millions of readers, and these fan letters asking for questions about the fate of the gerbil or hamster or whatever pet the main character had must have arrived at his home.  Dame Agatha Christie for example, had many people writing to her, but she never opened her home to someone asking that Miss Marple marry Hercule Poirot.

That whole storyline didn't hold water for me, and it took me out of the movie pretty much right away.  Why Lidewij decides these two would be granted an audience with her surly drunk boss I won't know. Personally, I suspect that Van Houten is John Green's idealization of himself, someone whose writings has this powerful impact on the young.  The only difference between the faux-genius of Van Houten and the faux-genius of Green is that the latter LOVES to communicate with his fans.  It's an incredible thing that with one adaptation of his work, I already dislike John Green.

What really irks me about The Fault in Our Stars is how it plays with the audience.  It wants us to think the story is 'the truth' about young people with cancer, but it gives us the most clichéd characters: the emotionally needy best friend/comic relief, the slightly smug know-it-all-girl, the cocky boy who charms everyone to do his bidding, a boy so good at getting his way he can tell the mother of his best friend's ex-girlfriend to get back into the house while they egg it, AND SHE DOES IT!  It mocks certain conventions of the teen romance genre but it maintains and embraces others (down to the cutesy indie soundtrack).  The inclusion of the song All I Want by Kodaline doesn't help.  That song, which plays when the three are egging the house, is the same song played in the 2014 TCM Remembers montage.   Having seen the annual tribute before seeing The Fault in Our Stars, I recognized the song, and if one is distracted by that over what is suppose to be a 'touching' moment, then the thing pretty much falls flat to me.

I never like Elgort as Augustus (and as a side note, how come he got away with calling her Hazel Grace, but we never got her calling him Auggie or something equally silly).  I suppose he was suppose to be a charmer, but he came across to me as arrogant, conceited, and a little obnoxious.  It got to the point that I really didn't care if he lived or died, and when he is facing his final battle in his car, I found it laugh-out-loud funny rather than touching.

I love Woodley, so I can't say much against her.  In truth, I liked her in this role, especially since there was an evolution to her character, something Elgort/Auggie didn't have.

I suppose all generations need their own Love Story, something insipid, even idiotic, but which manipulates one emotionally and has faux-intellectual witticisms that will appeal to those whose minds gravitate to simple bromides as deep thoughts.  When once we had "Love means never having to say you're sorry", for Millennials, bred on Twitter and Facebook, something shorter will have to do.