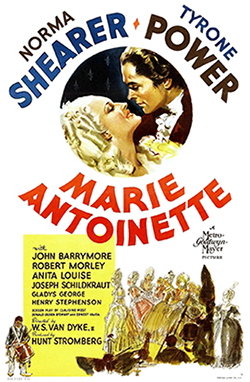 This review is part of the Summer Under the Stars Blogathon sponsored by Journeys in Classic Film. Today's star is John Barrymore.

Revolutions are ugly things, particularly for the ruling class. As America continues to be convulsed by a de facto revolution where the French Revolution and Reign of Terror cast their shadow on the nation, it is an interesting time to revisit 1938's Marie Antoinette to see how the Ancien Regime fell. Lavish to a level that the French Court would think opulent, Marie Antoinette has some good performances couched among the rather overblown central one.

Archduchess Maria Antonia of Austria (Norma Shearer) is delighted to find herself engaged to the Dauphin of France and her eventual future as Queen of France. Eagerly she goes to Versailles where she meets her grandfather-in-law, the formidable Louis XV (John Barrymore) and her fiancee, the future Louis XVI (Robert Morley).

To say the Dauphin is not exactly the object of desire is putting it mildly. Now as Marie Antoinette, the Dauphine of France cares for Louis, but the shy, awkward Dauphin cares nothing for parties or apparently siring an heir. Marie gives herself to decadence, living it up in Paris where she meets the dashing Swedish Count Axel de Fersen (Tyrone Power), the rare man to appear resist her charms. Marie has a fake friend in the Duke d'Orleans (Joseph Schildkraut), but a true one in Princess de Lamballe (Anita Louise). Her greatest enemy, however, is the milliner and Royal Mistress Madame Du Barry (Gladys George), who mocks her rival's childlessness.

Just as Marie is about to have her marriage annulled after publicly humiliating Du Barry, Louis XV dies, saving her from exile. Her continued frivolity, along with the weak rule of now-Louis XVI, the machinations of d'Orleans' (who has a claim to the throne if Louis XVI falls) and a series of growing crises bring about the fall of the monarchy and the loss of the Royal Family's heads. Despite a valiant effort to save Their Majesties Count de Fersen, with whom Her Majesty has had a tender romance, can only watch as the Queen of France is sent to Madame Guillotine.

If Marie Antoinette is anything, it is LAVISH. The sets and costumes of the French Court are wildly impressive to where they become almost distracting. It's unfortunate that Marie Antoinette was not released in color as originally intended, ironically because the lavish costumes and sets proved so expensive that shooting them in color would have pushed the budget higher.

Say what one will of Marie Antoinette, every penny that MGM spent on the film is up on the screen, and even in black-and-white we get the sense for the opulence of the Court.

As I said, the lavish nature of the film sometimes drowns out the drama of the impending doom that destroyed the French monarchy. It's a curious thing that despite being two and a  half hours long Marie Antoinette almost rushes through a lot of material. The entire Affair of the Necklace, the growing food crisis and the failed escape attempt seem to go so fast that one doesn't quite get a hold of things. The film's length is not helped by the appearance of an overture, intermission, entr'acte and exit music.

W.S. Van Dyke III got some find performances out of many of his cast. At the top of praise is Robert Morley as the shy, somewhat dull-headed but basically decent Louis XVI. Every time he is on the screen he blows everyone else out with his sad eyes and hesitant manner. He brings a gentleness, a sensitivity to Louis XVI that is endearing, making his end genuinely sad. Without overplaying the tragedy of his death, Morley says enough to show that the real Louis XVI would have been happier as a locksmith than as monarch.

Morley's sad-sack Dauphin makes those rare moments when he does have a backbone all the more startling. The scene where he confronts his grandfather and the Royal Mistress shows that when he summons his courage, he is more than able to push bullies away. In the totality of the film, Morley more than rightly earned his Best Supporting Actor Oscar nomination.

Despite the costar billing, Tyrone Power was not a major part of Marie Antoinette, but in his scenes with Shearer he sells those love scenes. Breathtakingly beautiful, Power showed himself not just a strong romantic lead but also a strong actor. Schildkraut's preening, almost effeminate and calculating d'Orleans came across appropriately as forever conniving and dangerous, sleazy and opportunistic. It was rich in arrogance and plotting, making d'Orleans a villain par excellence. Both Louis' saw that d'Orleans was dangerous: Louis XVI remarked that he did not trust him because "he smiles too much".

Barrymore's Louis XV was more blunt. After subtly mocking Du Barry, the King orders him out of his presence. "And take care, cousin. The liberals you encourage for your ends may destroy you for theirs," the monarch warns the scheming Duke. Words of wisdom for today's world. 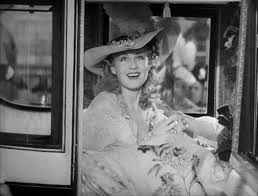 Barrymore, like Powell, was not a major part of Marie Antoinette but he equally commands the stage as the king who will tolerate no mocking of his favorite. He lends subtleties such as when he introduces Louis to Marie: in his facial expressions of almost despair and embarrassment, we see how Louis XV realizes this is not a heavenly match.

This brings us to Shearer. She received the last of her five Best Actress Oscar nominations for her performance, and my question is, "But why?" She made Marie Antoinette at times seem like a blithering idiot, particularly before and when she arrives at Court. Less decadent tease and more high-born floozy, it is almost impossible to sympathize with her horrifying end given how fluttery and exaggerated Shearer is. A little leeway can be given due to Marie Antoinette perhaps being fluttery and exaggerated but Shearer seems set on making her almost so clueless one roots for the Revolution.

That isn't to say she does not have good moments. It is hard to feel something for Marie Antoinette when her son is taken away from her. It's a moving piece of acting. It's not great but it is moving. Her expression as she approaches the guillotine: a mixture of resignation and regret, is effective. Again, not great but effective.

Marie Antoinette is not the definitive portrait of the woman condemned to tell her starving subjects "Let them eat cake!" (which she never did). It is worth the time for the lavish nature of it all, as well as for the performances of Barrymore, Power and especially Morley. It's longer than it should be, but it is worth the time exploring.