The Sandpiper: A Review 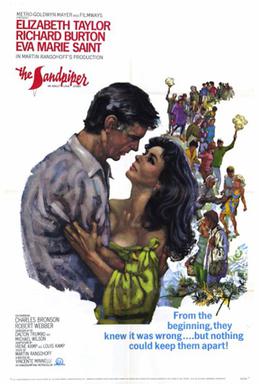 This review is part of the Summer Under the Stars Blogathon sponsored by Journeys in Classic Film. Today's star is Eva Marie Saint.

If The Sandpiper is remembered at all, it is due to two reasons: it is the third film teaming of Elizabeth Taylor and Richard Burton and its love theme, the Oscar-winning The Shadow of Your Smile. Apart from that The Sandpiper is not particularly good but it is mildly entertaining.
Free spirited bohemian artist Lisa Reynolds (Taylor) is forced to place her illegitimate son Danny (Morgan Mason) in an Episcopalian boarding school near her Big Sur home. The school's director Dr. Edward Hewitt (Burton) is stern but not unkind. Despite Lisa's overwrought fears Danny does adjust well, thanks to both Dr. and Mrs. Claire Hewitt (Eva Marie Saint).
Dr. Hewitt is quickly drawn to the outspoken atheist Reynolds and soon a passionate affair begins, with each questioning their worldviews (his on his myriad of sins, hers on marriage and the possibility of true love). However, eventually the affair is found out by the community. Hewitt finds he has been compromising so long financially (such as letting poor students slide if their parents kept checks rolling in) that despite his wife's forgiveness for his liaison he knows he cannot stay.
Lisa for her part sees that Danny is free himself to make his own choices, and he chooses to stay at the school. The lovers make a quiet farewell, each remembering "the shadow of your smile". 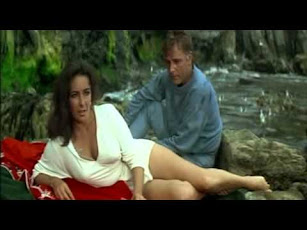 The Sandpiper, for better or worse, lays the symbolism of the actual sandpiper far too thick to where it almost slips into farce. Early in the film, Lisa finds an injured sandpiper and nurses it back to health. In keeping with her free spirited worldview, she tells the somewhat dour Episcopalian that he (the bird) has to be free to roam.
The subtext is anything but, and while one can roll with symbolism one thinks that The Sandpiper could have restrained itself just a touch.
In certain ways, The Sandpiper is almost a bit hilarious. The "bohemians" and "free spirits" that Lisa surrounds herself with now come across as either almost rather square or exaggerated figures. In any case, each of these avant-garde artistes look at least twenty years too old to be believable bohemians.
Performance-wise, you don't watch The Sandpiper for them. Burton and Taylor are not "acting". They are "being", but that is not a compliment or insult. Taylor seems almost determined to be hysterical in every sense of the word, coming across as less an earthy, passionate woman and more an annoying scold. Burton has only his baritone to act with (and as a side note, I don't know why this was such an existentialist crisis as I find that Episcopalians are essentially churchgoing atheists, but there it is).
Still, it is always a treat to see them together. They have a quiet magnetism together, making it hard to look away from this most glamorous and conflicted pair. 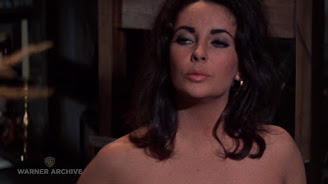 Eva Marie Saint does not have a big enough role as the wronged wife, but she is effective, particularly with Mason in their scene together. A surprising turn in that of Charles Bronson as Cos, the overtly antagonistic sculptor who needles Hewitt to the point where even Lisa says he's out of line. It's nice to see Bronson do something unexpected even if it is a bit curious.
If anything really lifts The Sandpiper, it is two elements. First is the beautiful location, as the film showcases Big Sur, California in beautiful scenery. Second, it is Johnny Mandel's jazz-tinted score, including the closing theme The Shadow of Your Smile. Mandel and lyricist Paul Francis Webster would go on to win Best Original Song for The Shadow of Your Smile, which plays in an instrumental version throughout The Sandpiper.
The scenery and music are both quite beautiful, and The Shadow of Your Smile is certainly worthy of its win. Apart from that though The Sandpiper is not a particularly great movie but it is something to watch on a quiet Sunday afternoon for the pairing of one of the great screen duos in the most lush of surroundings. The Sandpiper does not ask much from Burton and Taylor other than to be Burton and Taylor, but that is enough in this case.
DECISION: C+

Next Burton and Taylor Film: Who's Afraid of Virginia Woolf?
Posted by Rick at 8:20 AM