The Agony and the Ecstasy: A Review 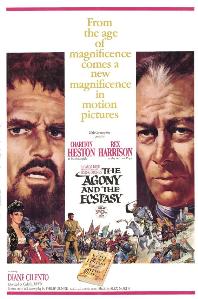 THE AGONY AND THE ECSTASY

This review is part of the Summer Under the Stars Blogathon sponsored by Journeys in Classic Film. Today's star is Charlton Heston.

Who would have imagined that the struggle between a temperamental artist and a tyrannical art patron over a commission would make for cinematic drama? Then again in The Agony and The Ecstasy, the artist is Michelangelo, the art patron is Pope Julius II and the commission is the Sistine Chapel ceiling. While The Agony and the Ecstasy suffers from a certain dryness, it makes for acceptable entertainment.
Michelangelo Buonarroti (Charlton Heston) keeps working on sculptures for the tomb of the very much alive warrior Pope Julius II (Rex Harrison). Michelangelo has an enemy in the Pope's architect Bramante (Harry Andrews) but a friend and champion in Cardinal Giovanni de Medici (Adolfo Celi). He also has the affection of the Cardinal's sister Antonia (Diane Cilento), who still carries a candle for our conflicted artist.
His Holiness continues his military campaigns but still has time to torment our tortured artist with a painting commission despite Michelangelo's objections that he is not a painter. He wants frescoes of the Apostles in the Sistine Chapel, but the project does not interest Michelangelo. His Holiness, however, will not be denied. Despite his best efforts Michelangelo finds the project a disaster set to ruin his reputation and he flees. It is only upon seeing nature that he finds inspiration to create the Book of Genesis upon the ceiling.
The project goes on and on, with Julius forever asking "When will it be done with?" and Michelangelo replying "When I am finished". Despite wars internal and external for both men, their pas de deux goes on until it reaches fruition with one of the greatest artworks in human history. 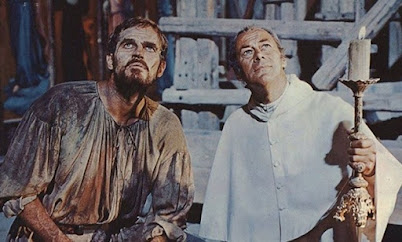 There is a drama buried within director Carol Reed's adaptation of Irving Stone's historical novel. It's unfortunate that somewhere along the line The Agony and The Ecstasy became almost an art history lesson versus a vivid drama. The film opens with a twelve minute overview of Michelangelo's artistic output for suitable for a documentary than a feature film. The ponderous narration that guides us through Michelangelo's works does not help.
It should be noted the film is two hours and nineteen minutes long, so by the time we get to the opening credits we've been either treated or tortured with a lengthy essay on Michelangelo's genius.
As a side note, the 1989 documentary Michelangelo: Self-Portrait did a much better job in covering both his life and artwork and worth seeking out.
There are certain elements that lift The Agony and The Ecstasy. At the top of the list is Rex Harrison, who was a master at being imperious without being dislikable. Despite being a tyrant, bossy and a literal holy terror you get through Harrison's performance a respect for Julius, a man who always seems to have a hidden motive for what he does, hidden even to himself. 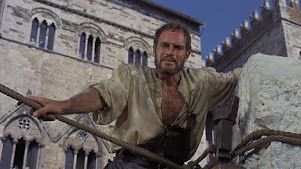 Heston has an ability to portray men of history, and The Agony and The Ecstasy gives him a chance to once again play a titan of another era. I think this is a good, strong performance: the artistic temperament bursting out against Julius' tyranny.
Though her role is small, I think Cilentro is the best in the film as The Countess de Medici, the woman to coax Michelangelo out of his funk and foolishness. Shrewd and loving, Cilentro dominates when she is on the screen.
As for Michelangelo's love life, while it is made clear in the film that Michelangelo and the Countess have something of a romance, you can see perhaps a sly suggestion of Michelangelo's potential homosexuality peering out. At one point, Michelangelo points out that he does not have a passion for women. As the Countess stares at a sketch of a male figure, Michelangelo says "It's not that either," but whether he was referring to his art or the subject is left to the imagination. If we believe Philip Dunne's screenplay, one would describe Michelangelo as asexual.
The film also has the benefit of Alex North's Oscar-nominated score and the excellent recreation of the Sistine Chapel which was also Oscar-nominated. The visuals in The Agony and The Ecstasy will I think hold viewers attention more than the lumbering pace.
The Agony and The Ecstasy, if remade, could be about the struggle between artist and patron, between he who pays for a work and he who makes it, the conflict between the artistic vision and the desires of the owner. As it stands, while it is a bit slow and slightly pompous (the opening art lesson, the intermission, the stiffness of it all), The Agony and The Ecstasy does have qualities of good performances from Harrison, Heston and Cilentro and excellent recreations of one of humanity's greatest artistic achievements.
At least the Sistine Chapel was one of humanity's greatest cinematic achievements until the Marvel Cinematic Universe came along, and we all know Guardians of the Galaxy Vol 2 is vastly superior to whatever rubbish the Renaissance spun out.
DECISION: B-
Posted by Rick at 5:50 AM