A Man Called Adam: A Review 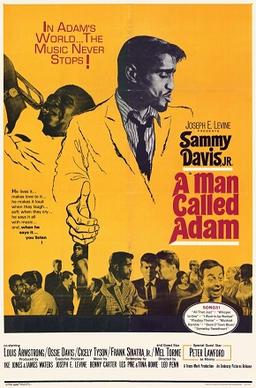 This review is part of the Summer Under the Stars Blogathon sponsored by Journeys in Classic Film. Today's star is Sammy Davis, Jr.

Sammy Davis, Jr. in my opinion is not as well-remembered as he should be. He was more than just a member of the Rat Pack, but a gifted singer, dancer and actor. A Man Called Adam showcases Davis' dramatic ability despite the low budget, along with surprisingly good turns from people who were not actors and an exceptional performance from someone who would become a legendary actress.

Highly talented but volatile trumpeter Adam Johnson (Davis) struggles between his artistic gifts and his inability to function. Constantly alienating his band, agent and record label, Adam carries great burdens. There's the general burden of being a black man in a world still struggling to give him the respect he is due. Then there's the guilt he carries over the deaths of his wife and child in a car accident of his making.

Into his life comes older trumpeter Willie Ferguson (Louis Armstrong) and his granddaughter, Civil Rights activist Claudia (Cicely Tyson), both temporarily staying at Adam's apartment with his prior permission while he was supposed to be away. Adam slowly starts to drop his defenses with them, and a romance blossoms. Adam also starts mentoring white trumpeter Vincent (Frank Sinatra, Jr.), but the old demons external and internal continue plaguing an increasingly ill Adam.

Run ins with racist cops, his continuing poor health, the guilt of his past and fears for his present all push Adam to try and push Claudia away, but she will not be dissuaded. Adam attempts to be more passive on a forced Southern tour organized by his label's representative Manny (Peter Lawford) but Vincent gets it instead for associating with blacks. Ultimately, his health, boozing and guilt all lead to a tragic ending to our brilliant but troubled trumpeter. 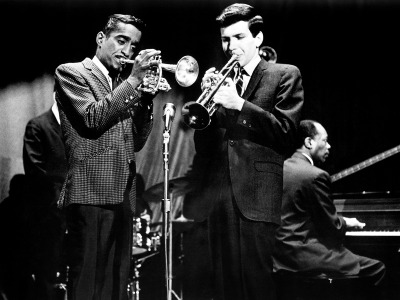 A Man Called Adam suffers from a small budget, the film at times feeling a bit disjointed and rushed from one scene to another. However, a forgiving viewer would find that A Man Called Adam has a wealth of positives that more than make up for the limitations.

At the top of the list are some wonderful performances. Sammy Davis, Jr. grips into the role with fervor, and even in what could have been wildly over-the-top moments Davis is controlled enough to make Adam's struggles and sometimes hysteria come across as more than artistic temperament.

Davis has a wonderful, quiet moment when he tells Claudia about the accident that killed his wife and child, one where racism and his reaction to it lead to a terrible tragedy. One feels that in this scene he is not acting but being, with some alterations describing Sammy Davis, Jr. versus Adam Johnson. It's a wonderful moment, full of tragedy and restraint, that showcases Davis' sadly untapped dramatic skills.

Cicely Tyson blows the screen off as Claudia, this proud and loving woman who suffers with and for Adam. Tyson is magnetic, beautiful and strong, an actress of impeccable ability who makes Claudia's journey and love for this troubled man a fascinating thing to watch. Louis Armstrong in a rare dramatic role showcases great skill as Willie, the older trumpeter who can more than hold his own against Adam. We do get a chance to hear him perform, always a great treat. Armstrong, however, shows a surprisingly adept dramatic side when talking to Adam or Claudia, revealing a wise man who knew trouble when it came his way.

Ossie Davis as Nelson, Adam's right-hand man, also does strong work, as does Lawford in essentially a cameo role. Frank Sinatra, Jr. did well, not brilliant but well. A nice surprise is Mel Torme playing himself singing a pre-Kander & Ebb All That Jazz, and A Man Called Adam having great music is no surprise, as Benny Carter wrote the score and some of the songs.

A Man Called Adam is an interesting time capsule of when jazz was more prominent in American musical circles.  Its issues of race and respect are still relevant today. Granted, one sense that this was done on a shoestring budget, but if one gets past that we see some excellent performances and wonderful music that make A Man Called Adam worth a watch.