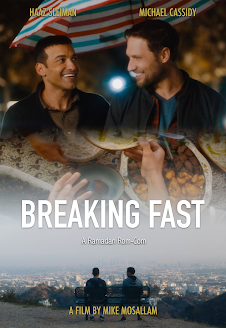 Breaking Fast is a little film that takes a lot of the conventions of a romantic comedy, puts them through unorthodox routes but still comes across as what it is: a sweet little tale of love.

Devout gay Muslim doctor Mohammed or Mo (Haaz Sleiman) has lost his closeted fellow Muslim boyfriend a year ago, and while he is now openly gay he is unwilling to find romance. His family has gone away for Ramadan, the Islamic holy month where observant Muslims who are physically able abstain from all pleasures of the flesh (food, sex) until sunset. Once night comes, Mo can break fast in the Iftar dinner.

Mo quietly accepts he will have to observe Iftar alone, until his flamboyant best friend Sam (Amin El Gamal) cajoles him to his birthday party, which falls on the first day of Ramadan. There, Mo meets Kal (Michael Cassidy), an up and coming actor. They are attracted to each other but Mo won't give in to the temptations. He does, however, agree to break fast with the Arabic-speaking Kal, bonding over their shared love of Superman.

As the romance blossoms, both Mo and Kal face their individual family issues as the holy month and their shared dinners go on. Their separate issues and individual situations sometimes land them in curious situations: Mo's carnal struggles at one point cause him major embarrassment when he accidentally drops his towel while hugging Kal, the potential for impure thoughts or deeds frightening him as he holds the object of desire while nude. However, their private issues also threaten to end their relationship; on the last night of Ramadan, with Mo's family back, Kal and Mo finally break their own romantic fast. 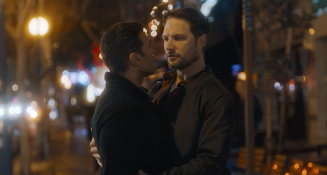 The curious thing about Breaking Fast is that the film does not make any of the unique issues the characters live with into anything extraordinary. Neither Mo's homosexuality or Islamic faith are treated as quirks or more importantly as contradictions. Breaking Fast could have made this into a serious to dour drama, but writer/director Mike Mosallam made a wise decision to make this into a straight romance (no pun intended).

With one exception all the characters are treated as human, complex figures who are fully formed. To Mo, his sexuality does not exclude his deep faith or vice versa. If I understand it, Mo may still be a virgin, his faith so strong that he would save himself for marriage (albeit marriage to a man, which to him is perfectly natural). Kal is not treated as the atheist/agnostic figure who threatens to disrupt Mo's belief system but as a decent but secretly troubled who finds himself falling in love, openly flirtatious but respectful of Mo's beliefs.

The script does the actors and situations right, with Mosallam's direction resisting the temptation to make what in other films be big or overt moments into simple ones. After Mo does a spit take that causes him to wet himself again, he remarks, "I can't seem to stay dry around you". In other films, this would be built up to some big double entendre, but the only thing you see is Kal raise his eyebrows and respond somewhat flirtatiously "Really?", but then quickly move on, the comment not in an over-the-top wink-wink manner. Instead, it's subtle enough to be noticed but not dwelt on. 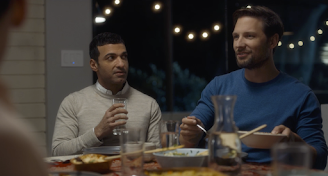 The performances are all top-notch. Sleiman makes Mo into an endearing figure: slightly awkward and bumbling, hesitant but also one who has a set of principles he lives by and works to adhere to. He can play it serious, such as when he attempts to comfort Kal when learning of his own issues. However, Sleiman is adept at playing almost innocent, like when he gives a standing ovation to Superman and is the only one to do so.

Cassidy too does great as Kal (which we quickly find is short for Kal-El). Cassidy makes Kal into a generally casual, happy-go-lucky figure but he too can play things dramatic.

El Gamal is probably the weak link, though I would argue through no fault of his own. He is the stereotypical flamboyant best friend, and to be honest Sam annoyed me in his manner. He didn't strike me as real but as cartoonish. Granted, perhaps that is how Sam was meant to be, but every time he came out he aggravated me (again, no pun intended). His character is meant, I think, to be the counterpoint to Mo's upbeat view of Islam, never wanting to deal with or accept that many Muslims or Muslim families would not be welcoming about gays as his mosque and family were. The conflict comes from what Kal calls Mo's "bright-siding", refusing to accept things are not always pleasant.

As Sam is so outlandishly flamboyant, his dramatic turn late in the film doesn't quite hold true

It's good to see a more complex and complete view of gay men, Muslims, and gay Muslim men, one that treats each as unique with their own acceptances of their apparent contradictions. 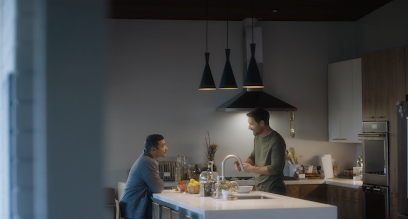 Breaking Fast works as a sweet little romantic comedy and genuine romance. The issues of being true to oneself, the burden of family and forgiveness internal and external make this a very unique picture. We go beyond stereotypes (save for Sam and his boy toy Jack), and see individuals with all their flaws and virtues. Some things are a bit unclear (is Mohammed actually a virgin? did Kal fall off the wagon?) and Mo's karaoke accompaniment by a gospel choir a bit too unrealistic but that's being picky.

On the whole, Breaking Fast is a nice little love story where a gay Muslim man can be himself free of prejudices internal and external.